Webber weaves together print and radio 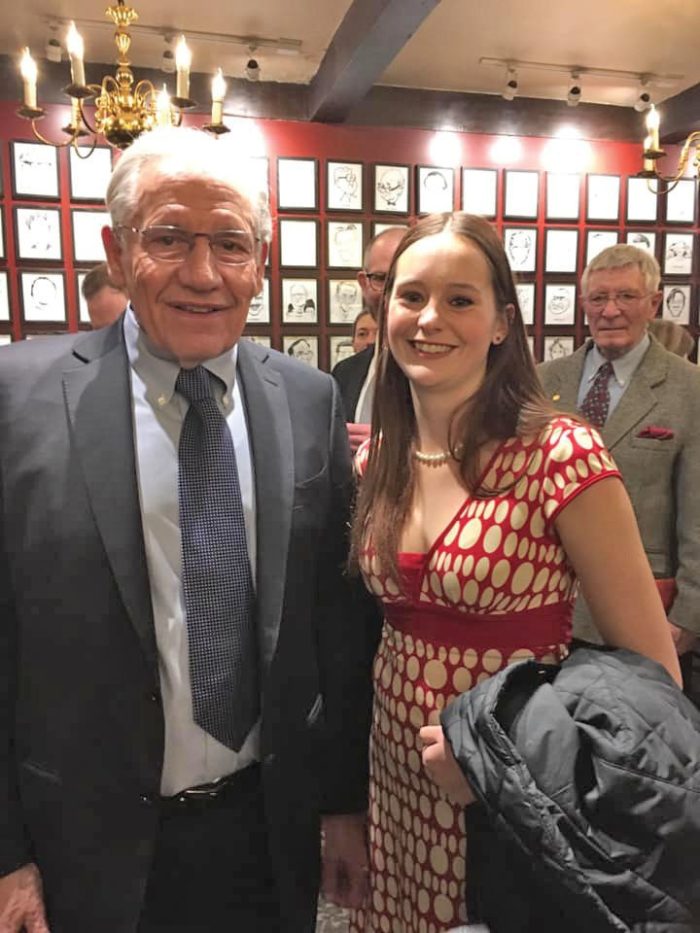 Megan Webber was of course thrilled to meet journalism icon Bob Woodward, but she admits that probably nobody at the Denver Athletic Club that night was more excited to meet her hero than Webber’s grandmother.

“I brought her up to meet him, and she was speechless. The look on her face was priceless — it was the cutest thing I’d ever seen,” Webber laughed. “She’s a big fan.”

That said, Webber herself is still reeling from the experience. It was the the Denver Press Club’s 25th annual Damon Runyon Award Banquet, and the student journalist had been named winner of the 2019 John C. Ensslin Scholarship. Woodward was the featured honoree of the evening, but when he met Webber, he made her feel like she was the one in the limelight.

“It was definitely kind of surreal to meet him and then have someone tell him, ‘Hey, this is the winner of the top scholarship,’ and then he just wanted to ask me questions,” she recalled. “I was just like, ‘Oh my god!’ He’s actually really nice… [he] wanted to know what I wanted to do with my career. He told us stories about his time with Watergate and working at the Washington Post.”

The Pulitzer Prize (and now Damon Runyon Award) winner also offered some professional advice to Webber and the six other scholars being recognized that evening.

“Never say never, go to the scene … and show up,” Webber said he told the group. “Everyone in the room was just in awe. He’s such a good storyteller and was inspiring and fun to listen to.”

Roaring Fork Valley locals may recognize Webber’s voice from her radio show on KDNK, which she started as a 12-year-old DJ. That was before she caught the journalism bug, but she was already maintaining an important family legacy: Andy Zanca was her uncle, for whom her mother named the Andy Zanca Youth Empowerment Program (AZYEP) when she founded it.

It wasn’t until she enrolled at Colorado Mesa University in 2016 that, at her father’s suggestion, she started to delve into reporting for the school’s newspaper. Then, last summer, she landed internships at both KDNK and the Glenwood Springs Post Independent — and much of her work in those roles led to her winning the esteemed Press Club scholarship.

Now, in addition to her workload as a full-time student at Metropolitan State University Denver, Webber manages the features section of The Metropolitan as editor.

“With that position, it means I’m also responsible for training new writers, and a lot of these writers have never written for a newspaper: they don’t AP style; they’ve never conducted an interview,” she said. “ When a story doesn’t turn out … I have to find a way to fill that space, but I like it. And I like the writing aspect of it; I do get to write a fair bit.”

To answer Woodward’s questions about what she wants for her career, Webber is leaving herself open to possibilities while staying true to her roots.

“I don’t know where I want to be, but I know I want to be doing something in print or radio. I know big-city outlets are good because they get your name out there and they give you that experience,” she said, acknowledging that there are pros and cons to working in larger versus smaller communities. “I loved working at KDNK and the Post Independent because they’re local outlets that pretty much every story I wrote had an impact on the community. I just liked knowing it was actually making a difference.”

Somewhat ironically, she knows in which city she’ll be spending the upcoming summer — New Orleans — but at which outlet is yet to be determined. Stay tuned.