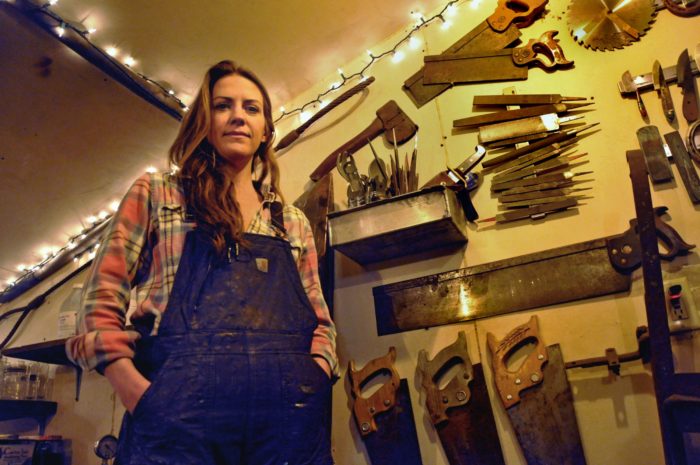 Kay Foye is an alchemist, although she denies it.

But how else would one describe a woman who can make a gleaming knife out of an old, rusted farrier’s rasp? Foye’s knives are personal. Her clients (or friends) send meaningful items out of which she makes a blade or the handle for a blade. Or both.

“I love to connect to people’s history, their stories, things that hold meaning to them,” she told me. In this case, Foye is making a knife for her friend, Britney, a truck driver who lives on a horse ranch in California. “I felt incredibly compelled to say, ‘listen, if you have some materials you want to use, send them my way, and I’ll make you a knife,’” she explained. Britney sent her the rasp. Foye will add roses to the handle.

When she’s ready to make the knife, she will place the rasp in a portable, propane, double-valve forge that’s about a foot and a half long with maybe an 8-inch oval-shaped opening. Foye loves forging steel.

“Once it starts to heat up and change color, once you see the light pulled into it, it’s like clay,” she explained. “The heat is high enough so you can see into the steel.”

At a certain temperature, the metal becomes malleable.

“You can tell what temperature it’s at based on the color,” says Foye. She has to keep her eye on the forge at all times. “You have to watch it as the temperatures change because if you just get it a little too hot or if it gets a little too cold, you can crack it or change the composition of the metal.”

She wasn’t forging the day I visited her studio, a tiny 12 x 14 windowless space on the second floor of a mechanic’s shop on 12th Street. The walls are lined with jars of stones, a ram’s horn, rocks, pieces of driftwood, old saws, and other steel objects that can be made into knives.  She showed me her belt grinder, which is how she bevels the blades. A river of sparks flowed from the grinder as shiny silver metal emerged from a rusted blade.

Foye, 35, began making knives in March, 2018 but she apprenticed before she went out on her own. In 2017, she was a wrangler for an outfitting company in Aspen and kept buying knives because she was losing them all the time.

“When you’re out in the middle of nowhere on a horse or working with horses in general, it’s just really important to have a knife on you,” she said. She then met a knife-maker from Cleveland, Georgia, who was showing his knives at Kimosabe in Aspen.

“I was so drawn to them,” she explained. “They were beautiful Damascus blades with all these crazy materials like giraffe bone and bison bone and all this stuff!”

He invited her to Georgia to learn from him.

“I didn’t really take it seriously,” she recalled. “I thought I would jump on my motorcycle, ride through the South, make a knife and come home.”

The apprenticeship lasted six months. But, it wasn’t easy. Her mentor’s son made the blades and she made the handles. She felt pressured to succeed and mimicked her mentor’s style. Then one day, he told her she needed to find her voice.

The handle that changed everything

For months, she had watched as her mentor squared off the edges of bone, stone and other materials to make his knife handles. The natural edges fell to the floor. “Then, it just clicked,” she recalled. He was throwing away the most beautiful parts of the materials. “When you see a buffalo horn, you don’t know what it is unless you see its shape and he was taking the shape away from it.”

She wrote about her first creation that came from pieces she found in the garbage:

“One night, I stayed up in the shop late and put together a knife-handle that celebrated the natural edges and the imperfections of the material. I used a blade that his son had fashioned from an old chairlift cable from Snowmass, Colorado, my home.”

Foye returned to Colorado in late 2018 and has developed a following on Instagram. She swears by social media as a marketing tool. Last Christmas, for example, she worked on a project with VSSL, a Canadian company.

“I made a knife a day for 12 days and each knife sold out within four minutes on their website,” she said.

Foye places a rose that she’ll use for Britney the Truck Driver’s knife in a stabilizing wash and tells me that she doesn’t feel special working in a traditionally male field. She is one of six women in the U.S. who are bladesmiths.

“I don’t want to use my femininity to promote my craft,” she said. “It’s not about the person making [the knife], it’s about what is being made.”