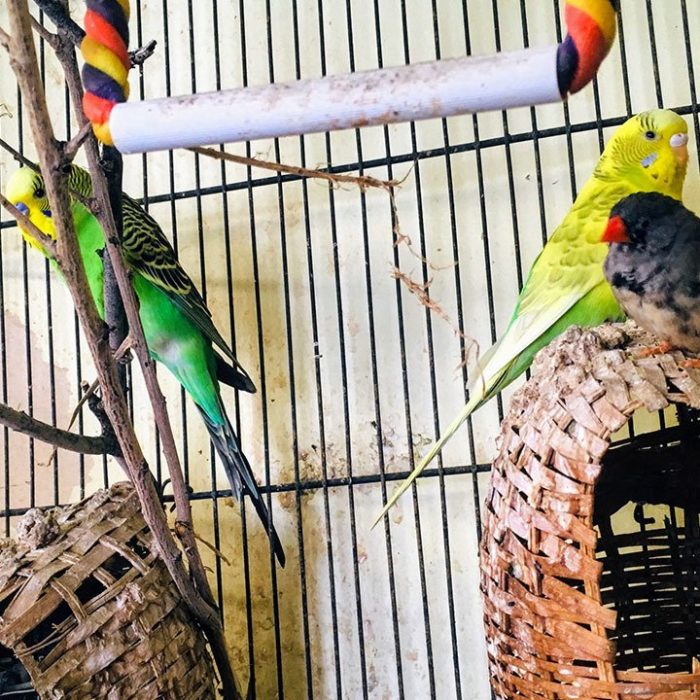 Laurel and Hardy, newly named and homed parakeets at Skyline Ranch, seem to be enjoying their new nest and finch friends. But how they got there was almost no laughing matter.

Barbara Dills first heard about one of the colorful birds during KDNK’s lost pet report.

“No lost pets except one found parakeet, and I thought that was very weird,” she recalled. “The weather was cold and nasty, and what was a parakeet doing out?”

Beyond that initial announcement, though, Dills went about her day, eventually heading up to Skyline to ride her horse that resides there.

“I’m grooming him, and in comes one of our wonderful … guys, and he’s clutching something to his chest under his blue sweatshirt,” she said. “And it’s a parakeet!”

It was not, however, the same parakeet she had heard about earlier that morning on the radio. That parakeet had been found by Georgia Chamberlain and Olivia Emery on Wheel Circle, according to Dills’ understanding.

Still, when Skyline Ranch & Kennels Manager Lisa Johnson learned of the parakeet on the property, she contacted KDNK, just in case. Chamberlain and Emery, in turn, brought their found parakeet to the ranch.

“I think somebody let these little birdies go — we found two of them in the same day,” Johnson said. “They are very messy, so that might have been it, but I think it’s sad they did that during the winter. Thank goodness one of them flew up here.”

If hypotheses are correct and the birds were not wanted by their previous owners, that certainly isn’t the case anymore. Now, the pair have joined Johnson’s finches.

“I called KDNK and said, ‘Take them off the air, because we’re going to keep them now. They belong to us now,’” she said.

In fact, though Johnson didn’t mention it, Dills heard that there was more than one person at the ranch vying to keep them.

“On Sunday, I was up there with my horse, and I saw the gal at the kennel, and I asked, ‘How are the birds doing?’ She said the birds are fine, but Martha [Collison] and Lisa are arguing about who gets to keep them,” she laughed.

To be fair, despite the cleanup duty, Laurel and Hardy offer plenty of personality to inspire a fan club.

“The yellow one is very, very friendly” Johnson said. “She’ll jump on your little finger. They’re happy and playing and talking with the finches.”

Dills is just happy to see them in a good home.

“They would’ve not made it,” she said matter-of-factly.

While two birds have been found, another one’s gone missing. The Carbondale Public Arts Commission (CPAC) is actively working with sculptor Ty Gillespie about how best to mend his now-broken Birdie. The piece is part of the current public installation and stands outside of Fat Belly Burgers on Main Street — the signature “birdie” that topped the feature didn’t take flight, but it was lifted.

“None of us know what happened to the bird; it just got stolen,” Sondie Reiff of CPAC said. “That’s not good. It’s the mystery of us all. It’s pure vandalism, and you don’t expect that in this town because it’s all of our art.”

“We’re really lucky… it’s rare that we have vandalism issues,” she said, noting that with the frequency and quantity of public art installations in Carbondale, it’s impressive that it doesn’t happen more often. Of course, however, it has happened.

“There have been a few — the pink bunny ended up with some things happening, but it was easily fixed,” she said.