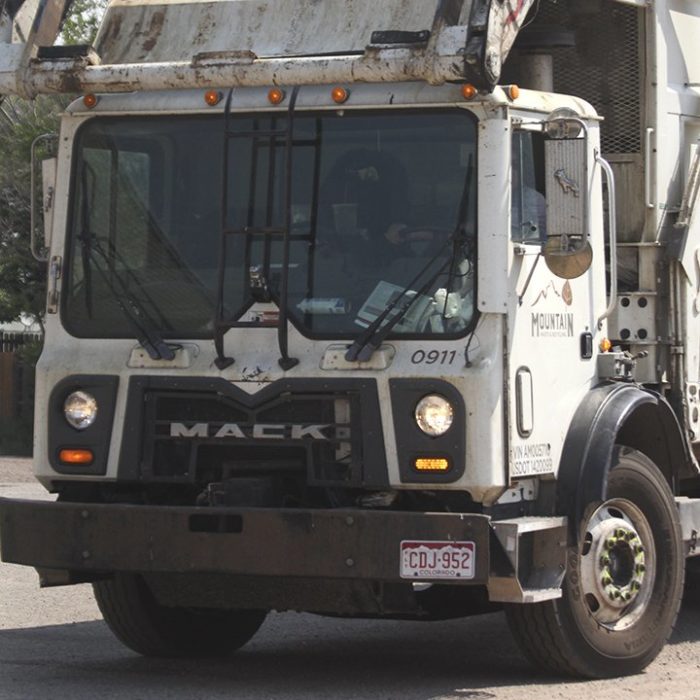 The Carbondale Board of Trustees followed staff’s lead in awarding the Town’s residential hauling contract to Mountain Waste and Recycling.

Public Works Director Kevin Schorzman estimated that Mountain Waste’s bid represented a 6 or 7 percent savings over Waste Management, the main competitor — at least for the average customer. Otherwise, he found both proposals to be about equal.

“I’ve worked with both companies and I’m confident that either one of them could do this,” he said.

Mayor Dan Richardson had come to a different conclusion.

“My analysis said that the cost was so close… that it wasn’t a driver for me,” he said. “I could live with either, but Waste Management came out on top for me.”

“I have heard really great things about their staffing and their training nationwide as a corporation,” she said.

Still, she was inclined to follow the Schorzman’s recommendation, as were the other trustees.

“They’re the ones who put in literally hundreds of hours on this,” Marty Silverstein said.

Besides, Ben Bohmfalk pointed out, most people in town are already using Mountain Waste.

All else being about equal, Heather Henry thought that was a pretty compelling benefit.

“I think this is going to be enough change as it is,” she said.

The public contract, which will be implemented between June and September, is intended to reduce truck traffic and wildlife impacts while increasing diversion. Vendor requirements included fewer delivery days, volumetric pricing and built-in recycling and yard waste collection.

Residents will be billed by the Town just like any other utility — although they can also opt to contract with alternative or additional services as well.

It’s something of a compromise between the old municipal hauler and landfill service Carbondale used to run and the free-market approach of recent years. And while households that produce a lot of trash may end up paying more, it’s expected to actually be cheaper for most residents.

“I see this as being a win-win for everyone,” Silverstein said.

Added Town Manager Jay Harrington, “It’s amazing what some people go through to save on trash pickup.”

Industrial and commercial users, as well as residential complexes with more than eight units, will not be affected. Nor does the Town intend to penalize folks who might struggle with the transition.

“I don’t want people to be hit with penalties right away,” Sparhawk said.

Schorzman assured trustees that, whichever option they chose, that wasn’t likely to be the outcome.

“Both companies proposals were… more focused on ‘let’s educate before we penalize,’” he said. “I think what we would endeavor to do in the start up phase of this is sit down with the hauler and let them know we’re not out to just hammer people right off the bat.”

Eventually, however, enforcement will be necessary to make sure the Town is accomplishing its goals. Folks who pile bags on top of a small container will be billed more, and those who risk attracting wildlife by putting their containers out early can be subject to a fine or simply charged for a bear-proof can.

Bohmfalk also expressed hope that a combination of education on what you can and can’t recycle coupled with waste stream monitoring would ensure their diversion goals are actually met.

With the outcome almost certain, Jeb Hensley of Waste Management was graceful in defeat. He thanked the board for seriously considering the merits of each proposal rather than just rubber-stamping the cheapest option.

“You guys put a long of thought, effort and consideration into this,” he said. “Obviously the price is a big deal… We have to pride ourselves on the service, the technology and the safety part of it.”

Doug Goldsmith of Mountain Waste also praised the process while expressing satisfaction that the local company won the day.

“The fact that there is nobody here is a testament… to Kevin, staff and the ability to get the information out,” he said. “We are your neighbor. We are right down the road.”

The ultimate approval was unanimous.

Passed several amendments to the Unified Development Code ranging from rules for mobile home parks to lighting requirements to typo fixes. A specific tweak to the sign code was considered separately on a “fast track” due to pending litigation. Bohmfalk praised the enhanced accessibility of the code and, like the trash discussion, took the lack of public comment as a good sign. It likely won’t be the last tweak to the UDC. “Once we adopt this, the next update process starts tomorrow,” Harrington said.

Granted CoVenture a special event liquor license for April 12 even though no one from the organization showed up to present.