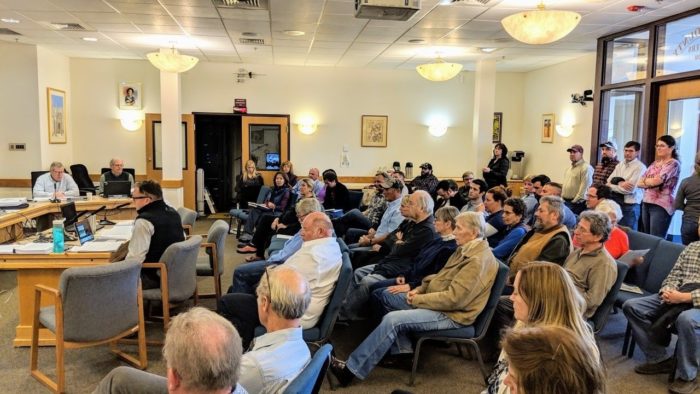 Even at 1 p.m. on a Monday afternoon, Suite 100 at 108 Eighth Street in Glenwood Springs was standing room only. About 65 people crammed into the Board of Garfield County Commissioners public hearings about two proposed self-storage facilities, Blue Mountain Mini Storage and GO Self Storage.

Ultimately, Commissioner Mike Sampson said he “felt very conflicted” and, as a Rifle resident unfamiliar with the proposed areas for the sites, requested a continuation of the hearings to accommodate a site visit, which was granted and scheduled for April. Both staff and every testifying member of the public vocalized opposition to the applications.

At one point, Commissioner Tom Jankovsky felt the need to calm the crowd.

“The arrogance of heckling turns me the opposite direction, so I would really ask the audience to be respectful. I would thank the audience for that,” he said after Chad Lee, who represents BlueMountain Garfield LLC, felt interrupted in his presentation.

Lee acknowledged that he had his work cut out for him in persuading the commissioners to approve the 96,000-square-foot, three-story proposed facility at the Highway 82 and County Road 100 intersection. Such approval would be in opposition to staff, which recommended the commissioners deny both project applications.

“What the staff report says, basically, is that this project meets all the requirements of this code, except they object on the compatibility grounds,” he said. “We’re going to talk about why this project is compatible.”

Lee emphasized founders Andy and Jennifer Moszynskis’ local ties in his appeal, adding that the Aspen couple wanted their third commercial endeavor to be closer to home. He mentioned their commitment to community and partnering with local nonprofits. Additionally, Lee’s presentation included a video from brand ambassador and renowned backcountry skier Chris Davenport and a letter from Parker Mayor Mike Waid in support of the project (the other Colorado BlueMountain site is in Parker, which has since banned any further large-scale storage facilities, according to The Denver Post).

“I think I will probably be their first customer,” Davenport, another Aspen resident, said in the video.

But many Carbondale residents that testified in opposition of the project expressed fears that the facility is better suited for Aspen than the proposed area near Catherine Store. Linda Lafferty, best-selling fiction author and Missouri Heights resident, was among them.

“I do wonder, do we need something like this in our community, or is this really going to be helping Aspen, and is that storage going to be for people who may be more affluent than we are and have more toys?” she suggested in addition to her concerns about increased traffic on County Road 100.

Susy Ellison, another longtime Carbondalian, chimed in: “I’m happy to live in Garfield County and not in Parker,” to vigorous affirmative nods from people sitting in her vicinity.

Others voiced concerns over optimistic service promises from the applicant with few assurances for delivery.

Carbondale Fire Chief Rob Goodwin, who was not present at the meeting, seemed a little surprised when told that supplying water to fire trucks was among Lee’s pitches for the BlueMountain facility.

“I haven’t looked at their plan. I don’t think anybody has, really,” Goodwin said.

“It’s engineered so a fire truck can pull up, hook into it and take off to fight fires, wherever they may be. It’s going to provide up to 20 fire trucks with firefighting capacity,” he said.

Goodwin, for his part, stressed that several factors go into supplying fire trucks beyond quantity of water, such as specific water pressure and accessible heights.

“A simple statement of yes, this happens or no, this won’t — I don’t know you can say that either way,” he said. “I don’t have enough information. We need to see what they’re planning; where the hydrants would be; how high above the hydrants are the tanks; can you access it? If someone put in 90,000 gallons with a hydrant that you can pull up to from the highway, that’s great, but it’s just not that simple.”

It’s not the only discrepancy between local officials’ and Lee’s interpretations of what’s possible for the area. A second hearing for BlueMountain Mini Storage centered on removing a residential-only designation for the subdivision at the proposed site, which would require a land-use permit change. After several Carbondalians requested clarification about the current designation and the implications for the future if the land-use permit change goes through.

“We are restricting it against primary residential use, and this is an argument we got into with staff. In our opinion, this is not industrial use … we’re not processing things into new things,” Lee replied, rightly noting that no rezoning will be necessary for the project to move forward. “In order to put this industrial use on this subdivision, we have to pivot primary residential use. That doesn’t prohibit accessory dwelling units…”

“We might disagree with you, there. No residential means no residential. Accessory dwelling units, that would, I would disagree…” she started, but Lee dismissed her before she could finish.

“OK, well I thought we clarified that before the hearing, and we haven’t talked about that in months, so that’s fine,” he interrupted.

Both the staff and the applicants agreed a continuation on the matter was appropriate, which the commissioners reflected in a unanimous decision.

The proposed GO Self Storage facility seeks to build at Planted Earth Nursery, 12744 Highway 82, in the Dixon Subdivision.

“It would be foolish to think developing in such a vibrant area would be easy. We all know the community is active and willing to take part in the shaping of it,” Grammer said, noting his involvement in developing the Willits Town Center. The updated plan limits hours from 6 a.m. to 10 p.m.

Most of the concerns surrounding the BlueMountain Mini Storage were echoed in the public hearing for GO Self Storage: increased traffic at the risk of public safety, lighting and signage disturbing neighbors’ peace, setting the stage for future development and, in the case of GO Self Storage specifically, the future of the Kelso Ditch.

Doug Platte, who represents applicant Wes Grammer, has been working diligently with the Kelso Ditch Company to create a plan for the future of the ditch.

“All that is currently being worked out, so that’s a work in progress,” he said.

But according to the Kelso Ditch Company President Michael Stahl, things are not “hunky dory.”

“The shareholders of the ditch do not feel that their ditch should be taking a right or wrong view on someone developing their property — however, our ditch is potentially seriously impacted by this,” he said, alleging that the applicant has threatened legal action.