A struggling valley looks to its river 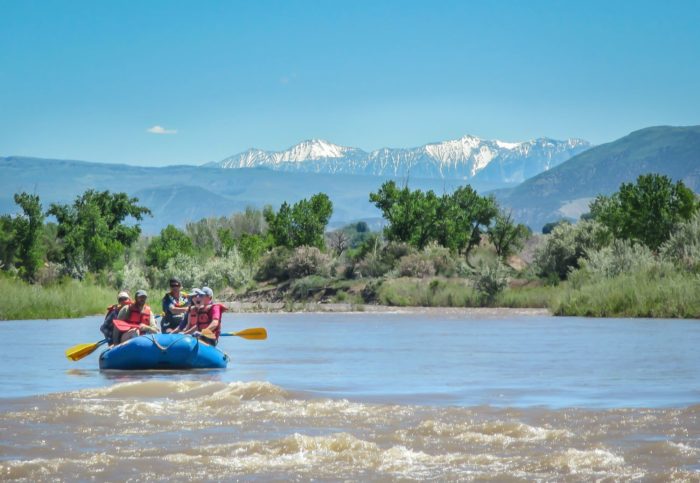 As snow continues to pile up high in the West Elk Mountains, something new is going on at their feet in the North Fork Valley.

Western Slope SUP, a river outfitting service in Hotchkiss, is preparing to offer the first-ever guided whitewater rafting tour on the North Fork of the Gunnison River. The 33-mile long stretch of river is cradled between the Grand Mesa and the West Elk Mountains. It flows past the pastoral farming towns of Paonia and Hotchkiss, to its confluence with the Gunnison River.

At mile eight, the river remembers a bygone era, as it quietly passes the remains of 100-year-old coal mines in Somerset. These abandoned mines used to support the people of the North Fork Valley, but in 2016, two of the three mines shut down for good. Since the mine closing, the families of the North Fork have suffered many economic hardships. Many lost their jobs, lifelong neighbors moved out of the valley in search of work, and the people and businesses left behind have had to work a little harder to survive.

Farming, the North Fork’s other classic tradition, is now poised to outlive the valley’s last active coal mine. In the early 1880s, the first settlers of the North Fork were both farmers and miners. They farmed the land to feed themselves, and mined the abundant local supply of coal to feed their stoves.

As times and traditions changed, the homesteaders of the 19th century have been replaced by organic farmers, fruit growers, and vintners. The valley is now home to 10 wineries, countless orchards, and has become the largest organic farming community in Colorado. The valley attracts attention every summer, when peaches ripen and wine flows.

For the last 20 years, the area has been known as the best place in Colorado to enjoy a glass of wine and a locally grown, organic meal. This image draws visitors into local stores and eateries, breathing life into the local economy.

One individual seeks to add the element of adventure to that image. Daniel Roman came to the North Fork in 2016 because of everything it was, but also for everything it wasn’t. As a lon time whitewater guide, the existence of a river without a guide service appeared to him as an opportunity. During an internship at an organic farm, he scoped out the local water ways to see if a river guiding company would be feasible in the valley. Roman had worked on rivers around the world, and knew a gem when he saw it. Here, there were three.

The waters of the North Fork, long used to irrigate fields along the valley floor, surged as he paddled his kayak through their class II and III rapids. After the North Fork’s confluence with the Gunnison River, the waters became calm and cut a deep canyon through red, green and mauve sandstone. Upstream on Anthracite Creek, a tributary of the North Fork, the waters raged to escape the narrow confines of the West Elk Mountains. Roman spent weeks paddling these three rivers and dreaming of creating a company that would guide tours on them.

With a limited budget, he decided first to focus on the Gunnison River. Unlike the other two rivers, the Gunnison flows year-round. Roman saw these calm waters, scenic canyons and small class I and II rapids as the perfect place for stand up paddle boarding.

The North Fork forms a 10-mile ribbon connecting the towns of Paonia and Hotchkiss. Along this course, it drops over man made irrigation diversion structures, and carves naturally through bedrock ledges which create miles of thrilling whitewater. Below the town of Hotchkiss, the North Fork cuts calmly through a 5-mile-long canyon. This spring Western Slope SUP will offer rafting tours on all three of these previously unknown sections of river.

The appearance of Western Slope SUP was a sign of change for the Valley.

Amid the collapse of the mining industry, the local outdoor industry was being born. This year, a geology and wine tour guiding service is starting up in Paonia. Paonia also hosts a cyclery, which offers e-bike tours and rentals.

As the wild places of the North Fork Valley begin to be discovered, others are sure to follow. Through its history, the North Fork Valley has been overlooked as an outdoor adventure destination. In spite of 12,000-foot mountain peaks, desert canyons and sprawling mesas, the area has never lent itself easily to exploration.

With no guide services and overgrown, poorly marked trails, these natural wonders used to appear inaccessible to visitors. Things are slowly changing in the North Fork Valley. Many hope that these changes will help support the local livelihood for years to come.