Invisible, but not indivisible 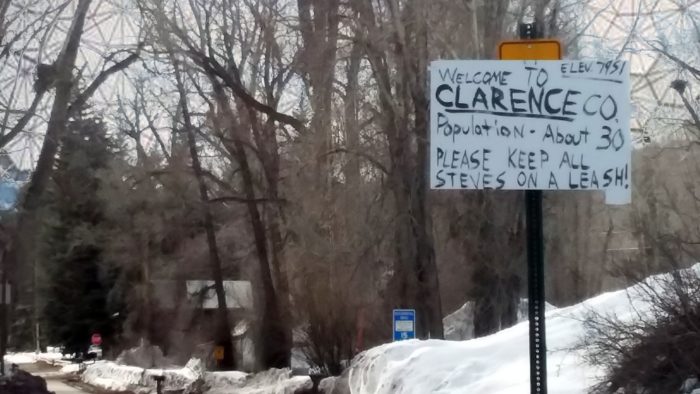 A proposal to holographically conceal everything beyond Gunnison County Road 3 from the outside world has fractured the Marble community.

“The first rule of Marble is don’t talk about Marble,” sculptor Greg Tonozzi told The Sopris Sun with a wink when we attempted to corner him during his weekly pilgrimage to City Market.

According to Tonozzi, area icon Lead King Paul originally got the idea from Ayn Rand’s controversial classic “Atlas Shrugged,” in which the world’s top minds hide themselves away in the Rocky Mountain community of Galt’s Gulch. Others have compared it to Wakanda from the Marvel Cinematic Universe.

Paul declined to comment for the story, but directed us instead to Steve and Alison Finn, a pair of blacksmiths he approached to build a device to hide the town.

“It was quite the engineering challenge,” Steve admitted, “But we put our heads together for a couple of weeks and eventually cracked it. It turns out Yule marble actually has exactly the light-scattering properties needed for the application.”

As soon as the snow melts, a series of reflectors will be placed at strategic points to project imagery of adjacent drainages across the Valley — making it appear roadless and uninhabited from Highway 133 or even passing planes. A pilot program has already proven the technology by rendering the outside operations at the marble quarry invisible.

“We really wanted to keep the mountainside clean, and this makes it look absolutely untouched,” noted General Manager Daniele Treves. “It will also conceal our operations from competitors.”

Not everyone is taking the plan in stride. Mayor and Slow Groovin’ Barbeque Owner Ryan Vinciguerra voiced serious concerns at a recent Town Council meeting, but was informed by Town Clerk Ron Leach that the town has no jurisdiction over the sites where the device will be deployed.

“They’ve gone through great pains to put this together on private land in full compliance with Forest Service, FCC and FAA requirements,” Leach said.

It may prove more difficult to remove references to the area from travel guides and social media, a task Marble Tourism Association President Vince Savage said he was asked to attempt and refused. The West Elk Scenic Byway committee has proven similarly uncooperative, with spokesman John Hoffman calling the whole proposal “preposterous.”

Residents of East Marble, meanwhile, have opted for succession rather than cooperation, reincorporating as Clarence and electing Alien Gibbons as their mayor.

“Quite frankly, we love ATVs, and this place is for the dogs,” the canine leader said. He also announced plans to try to make Beaver Lake into a major paddleboarding destination, saying he “won’t stop ’til I can walk across the lake without getting wet.”

The only person who seemed altogether concerned was Alex Menard of the Marble Museum.

“This whole thing is clearly just a hoax cooked up by The Sun for April Fools Day,” he said. “The Crystal Valley Echo would never stoop to such nonsense.”