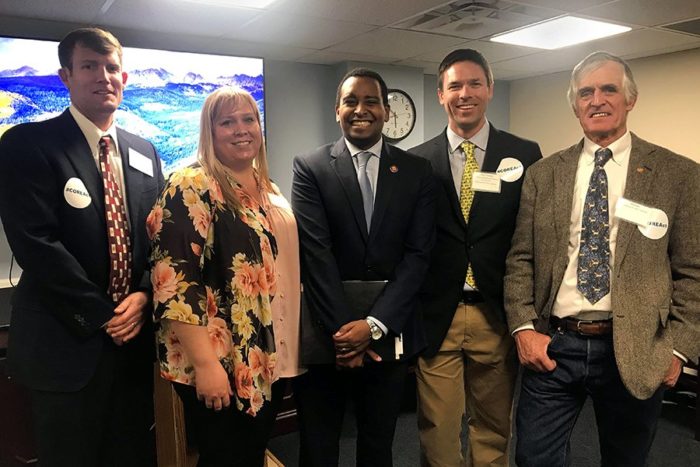 Legislative withdrawal of the Thompson Divide from future oil and natural gas leasing got its first congressional hearing in Washington, DC this week as part of an overall hearing on the Colorado Outdoor Recreation Economy (CORE). And, Roaring Fork Valley residents were on-hand for support.

When asked if he thought protection for the Thompson Divide, 200,000 acres south of Carbondale, would ever get this far, Fales said, initially, the Thompson Divide Coalition was naive about what it would take to secure permanent protection. “It was going to take getting a bill, not only working through the Forest Service and the Bureau of Land Management, but to get long-term protection to move through the United States House of Representatives, the United States Senate to get a bill signed by the President of the United States, that was not what we were thinking about when we started.”

At Tuesday’s hearing before the House Subcommittee on National Parks, Forest, and Public Lands, the Roaring Fork Valley contingent listened to pros and cons of the CORE Act plus two other bills. Stacey Bernot told The Sopris Sun why they did not give testimony.

“There was one witness on behalf of the entire Act,” she said. “And that spot went to Dan Gibbs, [executive director of the Colorado Department of Natural Resources].”

Gibbs, a former Summit County Commissioner, was appointed by Governor Jared Polis. He told the sub-committee that the bill protects critical wildlife habitat and migration corridors, the state’s recreation economy and water resources. He added, “It strikes the right balance by protecting key public lands from development while protecting all existing mineral rights and leaving other appropriate lands available for mining, oil and gas development.”

Congressman Scott Tipton also appeared before the committee, stating that he has heard from constituents who are not in favor of the CORE Act in its current form. “I think it is important to note that we do still have differing opinions that are in my district that may not have had their voices heard in the development of this legislation,” he said. He presented letters from the Colorado Woolgrower’s Association, the Colorado Snowmobile Association, the Colorado Off-Highway Vehicle Coalition, the Trails Preservation Alliance, and the Intermountain Forest Association.

One of Tipton’s concerns was that Garfield County Commissioners oppose permanent protection of the Thompson Divide.

Commissioner John Martin also claimed that Garfield County will have to pay back the federal government for withdrawn leases on the Thompson Divide. But, said Roush, this happened with the Roan Plateau settlement a few years ago and has nothing to do with the CORE Act. “The Act protects valid existing rights so lease holders would maintain those.” He added that the Act then allows lease-holders to trade in their leases, if they want, and get credits to acquire leases in other parts of the state. “It’s really fair to the lease-holders.”

The CORE Act also includes a methane capture component for coal mines in the North Fork Valley. Garfield County Commissioners said that they would not approve permanent protection for Thompson Divide until methane from the shuttered Mid-Continent coal mines near Redstone is captured. Trout Unlimited’s Scott Willoughby told KDNK that Senator Bennett is open to including them.

Roush, Willoughby, and those who went to Washington for this week’s hearings would like to clarify these issues with Garfield County. “Washington isn’t that far from Carbondale but it’s far enough where some things can get lost in translation,” Bernot said. “So in our brief conversation [with Congressman Tipton] it was very clear to us that there may be some gaps in how the communication has come out to our representatives.”