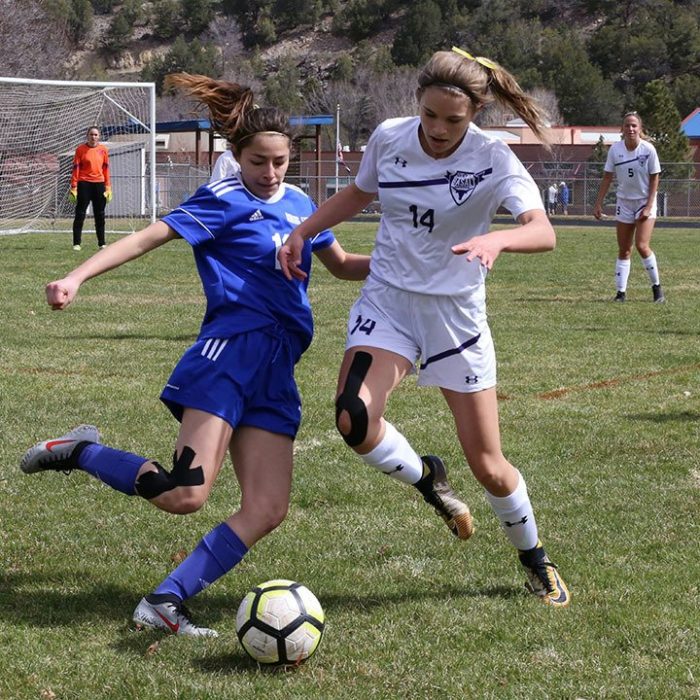 The first half of the game saw even play from both teams and the score remained 0-0 at halftime. But beginning in the second half the Longhorns mounted several attacks that went unanswered by the Rams’ defense and they generally outperformed their rivals. A beautiful cross from Basalt’s Sasha Bruckner did not yield a goal, but set the tone for a wave of aggressive offensive play.

The Rams’ Caroline Wisroth was a rock on defense, and shut down several drives. However, RFHS defenses could not withstand the Longhorns’ relentless efforts. Eleven minutes in Basalt sophomore and team captain Delaney Card got one by and put the first notch on the scoreboard.

The Longhorns produced a handful of dangerous crosses and breakaways, overpowering the Rams’ defense. While the Rams’ freshman goalkeeper had several saves to be proud of, she could not beat back the drive. With 30 minutes remaining, a through ball to Basalt junior Riley Webb allowed her to slot it in, raising the stakes to a two-goal lead. A breakaway by Basalt’s Stella Scott was saved, but another by junior Taylor Glen in the final minutes was not, cementing the lead and final score at 3-0, Longhorns.

Roaring Fork enjoyed a few hopeful offensive drives, but could not connect the dots and send it to the back of the net. The girls’ passing game left much to be desired, and they frequently lost possession of the ball as their attacks fizzled.

Freshman players Macey Peery and Genesis Quintero were lively playmakers, but their efforts went unrewarded. Roaring Fork junior Emily Broadhurst was hungry on the attack and consistently nipped at the Longhorns’ defense. Basalt junior Sasha Bruckner made herself useful both attacking and defending, helping to thwart any successful threats by the Rams.

RFHS coach Nick Forbes hoped the game would be a valuable learning experience in the early season.

“It’s unfortunate to drop a game like this,” he said. “It was a good experience for us to take stock of where we are in the season and what we need to do to get where we need to be ability-wise… It’s a bummer to lose to your rival but hopefully this is a motivating game and it changes our attitude about the rest of the season. We’re a little banged up, but sometimes these games are a blessing in disguise and mark a turning point in the season.”

BHS coach Kate McBride was pleased with her team’s performance and acknowledged that conditioning and perseverance helped win the day.

“We needed a little time to get organized, but once we did, we were doing circles around the other team and tiring them out,” she said. “Our players are much stronger as one. So everything we do, we do as a full team unit. We were up against a good competitor, and we appreciated the challenge.” McBride noted that regardless of the scoreboard, both teams were deeply invested in the gameplay. “All athletes really left it out on the field,” said McBride.

The results leave the Rams with a record of 2-3 for the season; the Longhorns are 1-3.