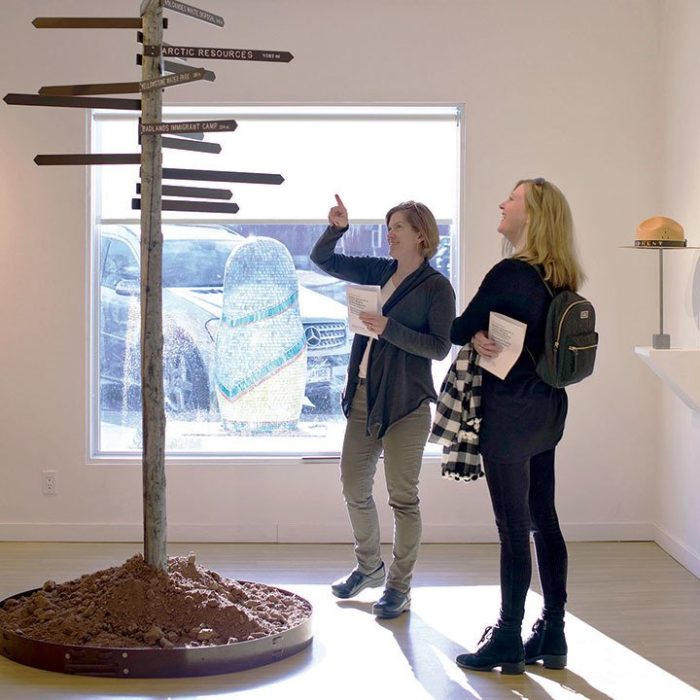 From the watercolor and ink to the detail in his wood, metal and paint sculptures, it is evident that Martin loves the west. Each watercolor and sculpture provide an entertaining glimpse of an imagined scene in nature. Although they are clearly imaginary, the scenes are realistic enough to make one wonder if they could actually happen. The level of detail in the ink and watercolors is uncanny. The contrast to the metal clipboards the paintings are mounted on is striking. His sculptures are seemingly simplistic, but inspire a level of imagination that is unexpected at the first glimpse. The combination of metal, paint and wood are a bit unusual and lend an air of whimsy to the sculptures.

Although Martin’s background is in sculpture, this exhibition showcases Martin’s transition from sculpture to watercolor, according to a Carbondale Arts press release.

As one moves through the exhibition, one is struck first by Will Gurley’s sign post sculpture, fittingly entitled “NP Development Junction.” However, Gurley’s true artistic expression is more evident in his broad stroked watercolors.

These paintings capture the juxtaposition between the National Parks and the imminent threat of development. Gurley is, however, talented across many mediums and also features prints that at first appear to be photographs of national parks. Upon closer inspection, one discovers they are actually altered photographs in a form of collage. Perhaps Gurley’s best work is one of the simplest. His Golden Arches sculpture is bold and simplistic, yet very powerful.

Although they are intended as solo exhibitions, the two exhibitions flow seamlessly together. Both artists utilize the mediums of watercolor and sculpture to effectively create a broad narrative about the environment and the threats it faces.

Martin uses his watercolors to create scenes of people enjoying the wilderness, but in odd and often whimsical ways. This forces the viewer to think about whether the scene is true or fiction. One such scene features a couple standing in a rocky cave on the edge of the lake, with their car pushed into the lake. Could this really happen? It’s not likely, but it makes the viewer question whether the couple did this on purpose or whether it was an accident they barely survived. The works as a whole demonstrate the human impact on the environment as well as the potential impacts through poor decisions.

Gurley is more obvious in his relationship to the environment. He depicts scenes where the nation’s National Parks are imminently threatened by development, including bulldozers and oil rigs. He depicts a future in which our most protected environmental treasures are scraped for profit and greed. Both artists offer a thought-provoking commentary that encourages the viewer to examine their own relationship to the environment.

The exhibitions are open until April 27 at the R2 Gallery inside The Launchpad at 76 S. Fourth Street in Carbondale. Visit carbondalearts.com for more information.