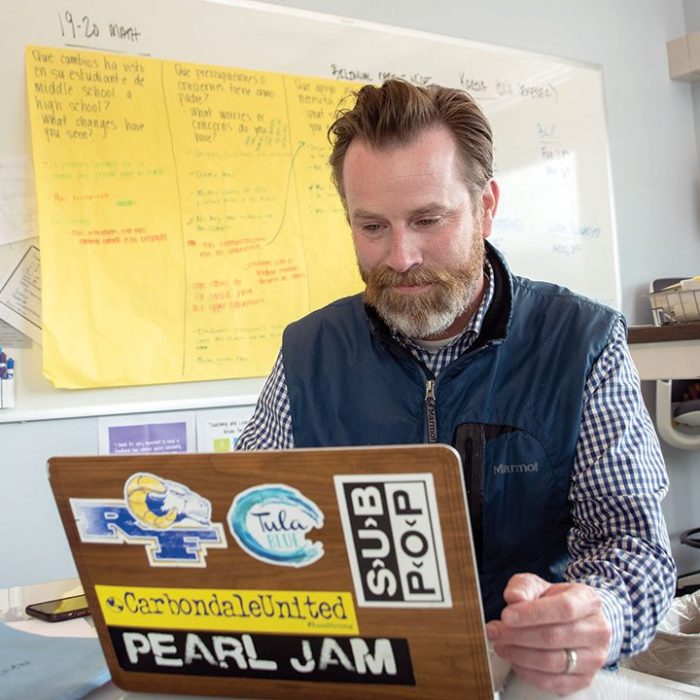 Brett Stringer walks the walk when it comes to doing what he believes is best for the schools and students he serves — even if it means walking away from his role as principal of Roaring Fork High School.

“It was a really hard decision,” Stringer reflected. “It’s no secret that my entrance into this community and role, there was some controversy around it … and it was hard to get away from that. Really, putting kids first and saying, ‘What’s best for this school and this community?’ — and also thinking about myself — I think it’s time to move on. That’s really it.”

Stringer’s resignation will take effect at the end of the school year. The district isn’t ready to start the hiring process yet (tinyurl.com/RFHSprocess), Superintendent Rob Stein confirmed, but parents and stakeholders can expect a letter in the coming days outlining next steps.

“We’re going to have some conversation to make sure everybody’s comfortable with the direction before we proceed, and that might take us a couple of weeks,” he said. By “everybody,” he means “staff and parents and maybe other community stakeholders.”

That’s an important clarification, as the original controversy that Stringer feels still lingers began in April 2017, when the Roaring Fork District School Board made his hire official in a unanimous vote. At that meeting, many staff, parents and stakeholders voiced their opinion that then-Assistant Principal Kelsie Goodman should have been promoted — and felt unheard.

Students even threatened a walkout in protest until a more unifying “waffle-in” replaced it, where Stein and Goodman both witnessed students’ focus shift to a bright future and a seeming acceptance of their new principal.

That more unified energy is exactly what Stringer hopes will propel the next hiring process.

“My hope is that the process will be rooted in that unity and rooted in best intentions … in really acknowledging the trajectory that the school is on and building from there — and improving on where we can improve. We’re never going to be perfect, but how can we be better?” he said.

For his part, Stringer is confident for the future — both his own and the school’s.

“I just came from Capstone, where we looked at the seniors’ Capstone submissions, and [I’m] blown away by the projects that our kids are doing,” he said. “They’re doing them outside of these walls, but they’re doing them with what they’ve learned from the people inside these walls.”

Capstone projects are in their second year as a graduation requirement at RFHS, and that’s just one of several initiatives that inspires Stringer’s confidence.

“I think we as a team have put in some really cool things that give more opportunity for community, whether it’s our Bilingual Parent Nights or it’s really looking at how we communicate,” he said.

Two bright yellow, several-feet-wide sheets of paper claim much of the more prominent real estate on Stringer’s office walls, each covered in notes in Spanish from parents to the school’s administration — by invitation via Bilingual Parent Nights. There are several more folded under his desk.

“What changes have you seen in your kid from middle school to high school? What worries do you have as a parent? What support do you need?” he read from one. They’re meant as a conversation starter, not a single exchange.

“[They’re] for us to say, ‘OK, this is what our community wants; these are the concerns that they have,’” he said. “Yes, let’s action plan, but let’s make sure we’re being collaborative in that process so the next time we meet, we can say, ‘Hey, last time you said you wanted this, and so these are the things that we’re offering, but how’s it working?’”

Much of Stringer’s leadership focuses on ensuring the community feels heard, even if it means his resignation.

“I think through … my transition in [as principal], one thing that was really highlighted was the need for systems support at better community voice within the school, and I think that’s an evolution that will always be getting better,” he said. “Where the team and where the next leader needs to go is figuring out better ways to make sure the communication is two-way.”

Stringer has celebrated many successes in his two-year tenure, and he credits his team for helping create foundations that will outlive his personal time at the school — and it’s a strategy that’s working.

“You look at academic success: you look at kids being offered some amazing opportunities, whether it be scholarships or internships or … whatever it may be, that’s just awesome,” he beamed.