Raising up your spring chickens 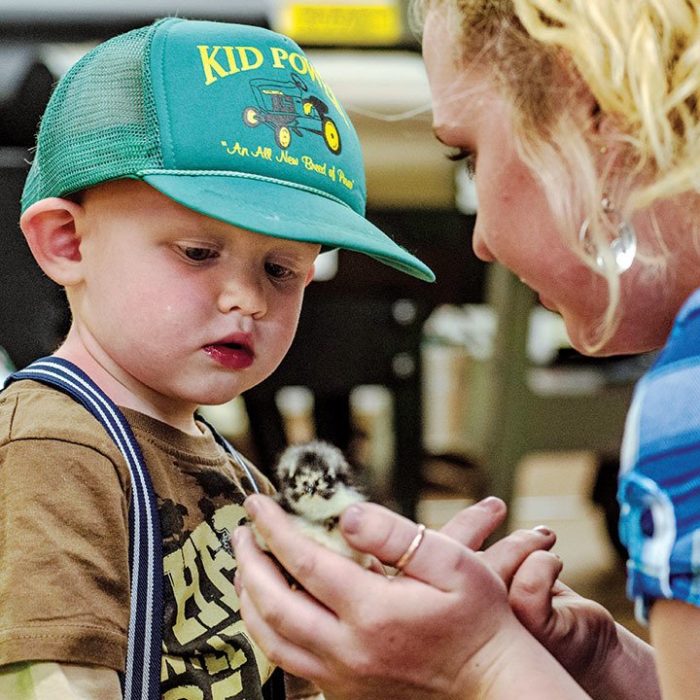 Don’t worry; the Roaring Fork Co-Op isn’t giving or selling baby chicks to folks without any sense of what it takes to raise them.

“We’re careful they don’t go out the door until people are ready for them,” Store Manager Marvin Claridge explained.

To that end, the Co-op partners with Purina for a “Flock Talk” event tackling the basics of raising chickens for first-timers and beyond.

“People come in for support,” Warehouse Manager Heladio Sanchez noted. “Poultry is growing so much here in the Valley.”

Purina Spokesperson Paul Hill isn’t surprised by that at all.

“People want to know where their food comes from,” he said. “The pride of raising your own is huge.”

His own chicken coop cost him about $300 in recycled materials and conforms to the recommendation of ten square feet per adult, including two or three inside and seven or eight outside.

“I’ve seen coops made out of everything from Volkswagens to pallets,” he said.

Hill encouraged people to know their local regulations. Carbondale, for instance, has a cap of six chickens per household. Those hoping to raise chickens from infancy will also need a brooder and heat lamp and a starter home with round edges to keep them from smothering each other.

Even with an ideal setup and attention every two hours, and there’s a good chance some won’t make it through the first week. After that, however, they’ll be fully feathered by six weeks and laying eggs as soon as week 16. Production peaks at around age 3 and drops to nothing around age 6. In the meantime, they’ll molt annually and give away a lot about their health via droppings.

Disease is a risk, as one child clearly understood in inquiring, “How do you get rid of poopy butt?” Hill walked through some cleaning methods and noted that the chicks at the Co-Op are vaccinated against coccidiosis. He encouraged folks to buy their chicks from the same place and try to avoid cross-contamination. Any symptoms of avian flu, he added, should be reported right away.

Most of all, he encouraged folks to have a good support system for advice, plus access to a vet.

“Don’t believe everything in the Colorado Chickens Facebook group,” he said, while praising the Co-Op as a resource. “You’re lucky to have these guys. They’re awesome to work with. As a rancher, I wish this place was in my town. It’s a one-stop shop for everything from fence posts to doughnuts.”

If you don’t want to raise your own eggs, the Co-Op also has the next-best thing — local eggs from Potter Farms on Missouri Heights (www.potterfarms.net).

“This is a reasonable, affordable way for people to get farm-fresh local eggs without having to deal with any of the fuss of raising them,” Justina Potter explained. “We started out with 25 hens, and eggs were gone in no time. We’ve ramped up to about 600.”

The eggs hit the Co-Op, Eagle Crest Nursery and Skip’s Farm to Market about two days after they’re laid, and are also available as part of the cuisine at the Red Rock Diner and Granetta Panini.

“Freshness is huge,” Justina asserted. “Just try it for yourself.”

That is, unless you’re hoping to make hard boiled eggs. The same tight membrane that gives their eggs their AA rating undermines the boiling process, and takes 7-10 days to break down. Incidentally, that’s also about how long you can leave untreated eggs out without washing them — though the Potters recommend just washing and refrigerating them. The shells are porous, so what’s on the outside makes its way in, Ted pointed out.

Justina and Ted also raise chicks to six weeks old for a feed store in Grand Junction, and offer live or butchered birds directly to customers on an annual basis. The older birds are better for soups or sauces, although the animals at the wildlife rehabilitation facility in Silt didn’t mind the year the Potters donated them there.

Potter Farms eggs are pasture-raised, which is a step above the free-range or cage-free designations you might see at the store. It means they have the chance to go out all day long — though they better be in at night.

The Potters plan to increase production to meet local demand.

“If we can fill the needs here, we’re good,” Justina said. “As long as people want it, we’ll keep doing it.”