We’re all a little ‘Bluenose’ 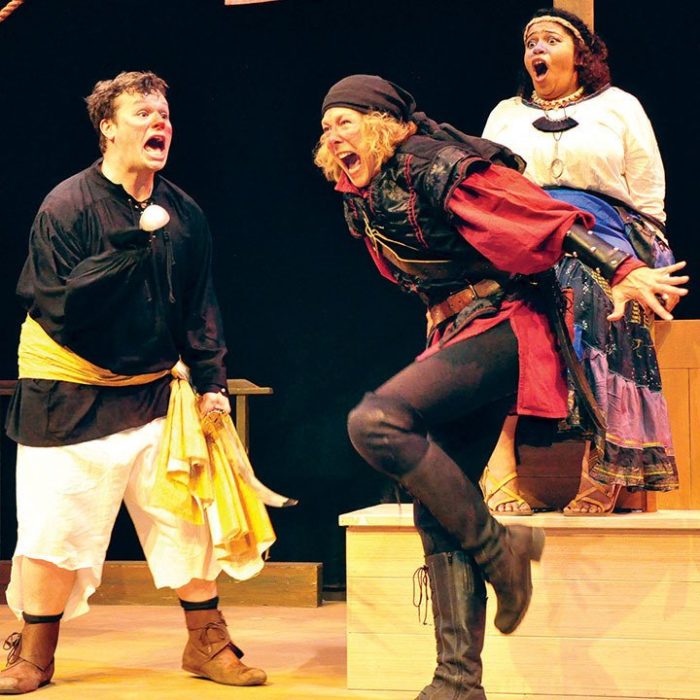 These are some of the treasures you’ll discover aboard a pirate ship in Thunder River Theatre Company’s (TRTC) upcoming production of “Bluenose.” The play is part of TRTC’s Theatre for Young Audiences (TYA) program and is being underwritten by Judy Benson, Laurie Bernhard, Andrea Garr, Cathy Montgomery, and the Betty Jane Schuss Fund at Aspen Community Foundation.

The cast includes the captain, Ratt, played by Libby Rife, who tries to run a tight ship, but she sorely lacks leadership and diplomacy skills. She is manipulative and without compassion for others, including her fellow pirate crew.

The two red-nosed crew members are played by Travis Dean Wilson, as Spatt, who is constantly berated by the captain but who desires to venture to other horizons. Dana Gaubatz, as Knatt, is a book-loving pirate who is a bit of a neologist (a word maker-upper).

The play examines the themes of inclusivity, diversity, and colonization. The pirates’ world and their biases are challenged when an islander named Ku, played by TRTC newcomer Jessie Douglas, gets tangled in their net. Ku is smart and self-assured but different in one noticeable way — her blue nose. Through the course of the play, each character realizes their own insecurities, prejudices, and ultimately, their strengths. Even Ku comes to examine her negative beliefs about others.

Douglas, who has lived in the Roaring Fork Valley for two years, points to the relevancy of the play’s message because “there’s a lot of strife happening right now in the world.” Her hope is the students take away that “it’s okay to be different and it’s good to make friends with people who are different because you might learn something from them.”

Corey Simpson, TRTC executive artistic director, explained, “Our underwriting program is new this year, and it’s beginning to generate a lot of excitement because it’s a way for people in our community to actively support our programming.”

Simpson said director Sonya Meyer found “Bluenose,” by Canadian playwright Emil Sher when doing a search for plays. “We were looking for material that would do the same things for children that our main season does for adults.” Thought-provoking theater is part of TRTC’s mission which “explores the human experience through inspired theatre and innovative artistry.”

Simpson said choosing a woman director was intentional, and Meyer made a bold choice in casting a woman in the pirate captain’s role. She said, in her historical research, she found there were women pirates and captains. Meyer noted the characters are written to be non-gender specific.

“Bluenose” will bring the set, cast, and crew off-site to Glenwood Elementary School and Carbondale Middle School allowing students to see this production live. By eliminating what could be a prohibitive cost to families, inclusive theatre is brought to the broader community.

This year’s production doubles the number of children seeing a TYA production. Also, Simpson sees “all of us at TRTC are looking at how to engage our community more… feeling like they have a way to participate and have leadership positions in our productions.”

Younger children will love the slapstick, pratfalls, and silly jokes. Older children will relate to the experience of not fitting in, like Ku’s blue-nose. There is humor, tenderness, and compassion. It would be a disservice to categorize Sher’s play as strictly a children’s play. Adults will find it to be a timely reminder of how their own prejudices play into everyday life.

Remember, when Ku says different can be good, she wants us to look at ourselves and each other in a new way.

Tickets are also now on sale for TRTC’s annual fundraising gala to be held May 4 at The Orchard in Carbondale. This year’s theme is titled “An Evening in Paris.” For more information and to purchase tickets, go to www.thunderrivertheatre.com.