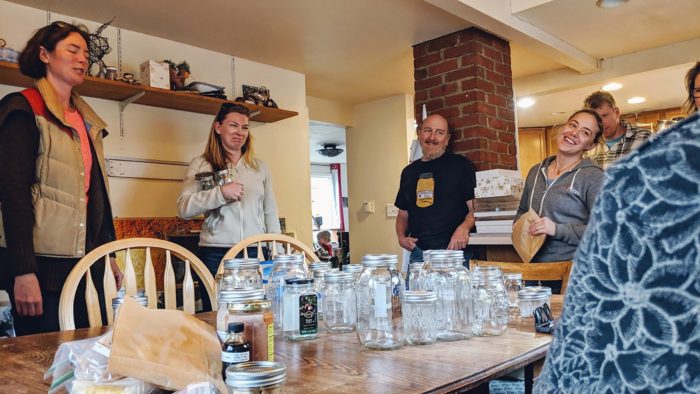 Talking with any one of the 10 members who answered Mark Burrows’s call to create a homemade goods club feels a bit like talking with an alchemist — they’ll wax poetic about their concoctions of ingredients and experimenting with different applications for their creations.

At this month’s meeting in Burrows’s home, I was trying to keep up with Jaspen Mackin’s enthusiasm for her first try at household cleaning products while also eyeing a plate of the host’s homemade chocolates behind her.

“Oh my god, Mark, these chocolates!” someone gushed from the adjacent room.

But I resisted the sweet temptation— I wanted to know more about how Mackin knew to use a tea dispenser to make anything but tea.

“I didn’t come up with this,” she offered. “There’s a magazine that I get — you can actually get it at City Market — and it’s full of DIY home recipes for face products and cleaning products … I’ve never made my own cleaning products before, but I’ve always wanted to.”

It’s a deviation for Mackin, who often brings something edible to share with the group. Earlier in the year, she brought yogurt.

“I would never do that for my personal use because it’s a lot of effort to make an amount of yogurt that you would go through in a reasonable time,” she said. “But giving everyone a huge jar, it was well worth the time. And I think that’s the beauty of this group: you get to try the things you’ve always wanted to try, but it’s worth your time because you’re making a bunch of it.”

Each participant brings a homemade offering, so in turn, everyone leaves with 10 samples. It’s a nice return on investment, they all agree. When Chase Engel was unavailable for the meeting this month, he dropped off his cabernet-franc-infused sea salt early.

“Not sure exactly what I’d put it on yet; probably would be great on something with a rich flavor like lamb, and I’m sure would be awesome with chocolate,” he wrote to the group’s Facebook page. “Can’t wait to see what’s waiting for me tomorrow.”

Matt Kennedy brought a raspberry and blood orange vinaigrette as his official item but also came bearing a charcuterie he’d made simply because he had plenty of meat.

“A while ago in November, I butchered a lamb, and I have a dry-aging meat chamber in my kitchen, so I … turned it into charcuterie,” he said of the snack. “I can’t eat all this, so I figured I’d come share.”

It’s not the first time the group has benefitted from a member’s surplus. April Crow-Spaulding once came armed with her husband Hank’s elk sausage that he’d made after a successful hunt.

“He’s very stingy with that stuff!” she laughed, highlighting what a treat it was to be able to share. Her most recent contribution featured her photography in the form of greeting cards.

“It’s been such a wide variety,” Crow-Spaulding said, noting that past projects have ranged from Burrows’s rosemary shortbread to Carlie Mock’s deodorant.

“Baking soda prevents the stench, but coconut oil prevents fungal buildup, so that’s kind of the two things you need,” Mock said with a smile at people’s vocal praises. “And arrowroot to bind it all together.”

Burrows likes to keep the spotlight on his fellow members, but his culinary talents create as much buzz as the beekeeper’s hives.

“I’ve been coveting [the shortbread],” Mackin said unapologetically. “That’s not to share at my house!”

“Oh, the shortbread!” everyone seemed to respond in unison.