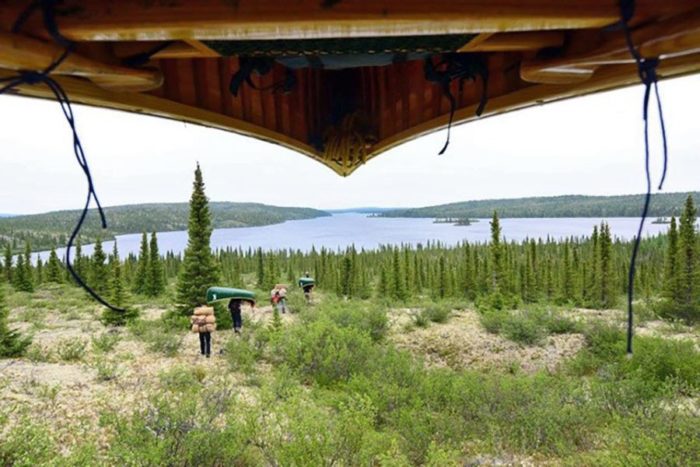 When outdoorsmen and filmmakers descend on Carbondale every year for 5Point, things happen — and what goes around comes around.

Case in point, local Maxine Christopher’s impression of Hannah Maia, who won “People’s Choice” and “Most Inspiring Film” at last year’s event for her documentary “My Big White Thighs and Me.” Christopher reached out to her with her own idea for a film, and as the festival gets under way this year, “Beyond the Bay” is in the works.

Maia will follow a group of ten teenage girls on a seven-week canoe trip through northern Canada. Her goal? To shoot a coming of age documentary about young women journeying into the wilderness, which will be called Beyond the Bay.

The group of young women will be paddling traditional wood-canvas canoes along the Eastmain River of Quebec, encountering rugged terrain as they paddle remote waterways and portage untrailed and rough areas replete with mudholes and muskeg bogs.

Canoers will follow traditional tripping methods, including the use of leather tumplines to portage their canoes, equipment, and wannigans (wood boxes that hold supplies) full of food from one lake to the next or down unpassable sections of rivers, following maps of routes that may not have been traveled in decades. The overall course they’ll be following is centuries old, and most of the methods that will be used during the trip are the same that were used on canoe trips in Canada over 100 years ago.

How remote will these young women be? To give you an idea, they’ll be driving two long days by bus from Lake Temagami in Ontario to reach the put-in along the Eastmain River, and will receive their one resupply while traveling via float plane.

Most nights they will be setting up a new camp, which will be broken down again in the morning, and cooking their meals over open fires using fire irons and a reflector oven to make bannock and other baked treats.  All the food eaten on the trip will be prepared from scratch by the canoers themselves, with modern trip food represented only by powdered milk and eggs and some dehydrated vegetables. Favorite trip foods include bacon sliced off of the smoked slab they carry; “goo balls” smashed by hand for protein-laden snacks; and camp coffee over the open fire.

Although the location will be stunning — and make for some incredible paddling! — the main focus for Maia is on the trials these young women will face as they undergo a grueling, self-supported canoe trip for seven weeks in the wilderness: the bonds formed through adversity, and the sisterhood that will grow from their endurance and their shared experience of the outdoors.

“In this story we’ll see what it is for young women to step away from the digitally mediated world of teenagers today and fall in love with their own strength and resilience, with their ‘girl-tribe’, and with the direct experience of wild places.”

The seven-week trip Maia will be documenting is led by Keewaydin Camp, a non-profit camp focused entirely on canoe tripping. Established in 1893, Keewaydin is steeped in history, and has been using traditional methods for tripping for well over 100 years. However, it’s only in the last 21 years that girls have been allowed to join the ranks.

In addition to the pains of portage, the young women making this journey will be giving up all technology before embarking, which is perhaps one of the more impressive aspects of their journey. This “tech fast” is a practical requirement of the trip since it takes place in remote Quebec in conditions where anything can, and probably will, get wet, and there are no cell towers for miles.

In a world where we are pulled more and more down — into the screens of our phones, our T.V.s, our laptops, and into the day-to-day that surrounds us — this documentary will showcase what happens when young women prioritize nature and the moment, and dive into the wilderness with their arms open.

When teenage girls go into the wilderness, free from mainstream society’s expectations, precious moments of palpable, uninhibited joy and self-worth can be found, and we’re excited to document those moments this summer.

Want to be part of the journey?The team has launched a Kickstarter campaign — visit BeyondTheBayFilm.com to learn more.