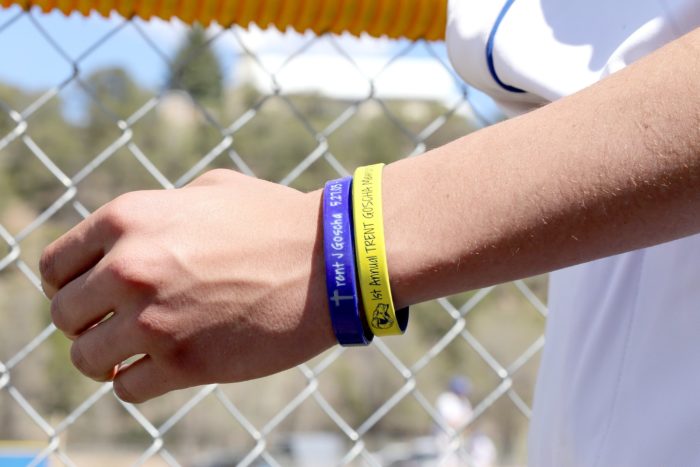 About 20 Roaring Fork High School students populated the stands at the start of the first of two games, and another five or so trickled in before the third inning.

In the end — the first game lasted three and a half hours, according to Coach Marty Madsen — the Rams came up short against the Montezuma-Cortez Panthers (9-13 and 3-5, respectively), but the scores weren’t the most important part of the day.

RFHS Senior Dawson Kuhl, whose .417 batting average is the team’s highest, reflected on playing for the Goscha family. Trent passed away in November 2016; he was 13 years old.

“We all knew that this was a big deal for the Goscha family, so our coaches didn’t really have to say much — we just all knew it was important,” he said. “It was a special thing to have everyone come together to show our love and support for the Goscha family. Trent was a special kid, and we play for him every time we get on the field, but this tournament was a great opportunity to show how much it means to us.”

Madsen  remembers Goscha well, as do most of his players.

“Even my veteran junior and senior kids knew him because he would come to a lot of our baseball camps and clinics. He and I had a pretty good relationship when he was in elementary school, and I think one of his big goals was to play for me and for our program,” he said.

Of course, while they’re taking the loss in stride, the Rams would have preferred a victory. But, as RFHS Junior Eli Nickamin acknowledged, the season’s not over.

“Today was rough — we played some good baseball, but sometimes it doesn’t go your way,” he said after the tournament. “We’re just trying to get some wins on our record.”

They have plenty of opportunity to do so, Madsen  noted.

“The crazy thing is we only have two and a half weeks left in our season, and we have … half our season left, so it’s going to get pretty wild here,” he said of the team’s eight remaining games.

It’s a grueling schedule — the next home game is a doubleheader against the Grand Valley Cardinals at 3 p.m. and 5 p.m. April 30 — so Madsen  plans practices to specifically train endurance.

“Baseball is a very mental enduring sport where you have to have a lot of focus for a long period of time,” he said. “That’s been the biggest trick with high-school boys — teaching them to have that mental toughness throughout a ballgame. We’ve set up practice for that and really work at the mental side of it, so we’re getting it hopefully to the point where games are actually easier than practice when it comes to that mental toughness.”

As of press time, the Rams are 2-2 in their league. The season ends on Senior Day, May 11 — at which time the recipient of a scholarship will be announced. That, too, is directly in honor of Goscha.

“We kind of designed [the Trent Goscha Memorial Tournament] to be a lot like the Brenda Patch Tournament, where it’s going to be a scholarship tournament for one deserving baseball athlete,” Madsen  said.

It’s not the only award named for Goscha. Last year, the Carbondale Wild West Rodeo Association established the Trent Goscha Sportsmanship Award. When he wasn’t on the baseball field, the middle schooler could be found at the rodeo.

It’s that level of kinship that RFHS Junior Frankie Harrington admires — in both sports.

“It was nice to see the community come support our first Trent Goscha Tournament,” he beamed.

And it is just the first of what Madsen  predicts will be a longstanding tradition for RFHS baseball.

“Next year will be even bigger and better,” he said.

Put a fork in it

Soccer: The girls are 3-1 in their league and host Aspen High School at 4 p.m. Thursday, April 25.

Track: The 2019 Colorado High School Activities Association (CHSAA) Class 3A State Championship kicks off at 8 a.m. Thursday, May 16 at the Jeffco Stadium, 500 Kipling St., in Lakewood.