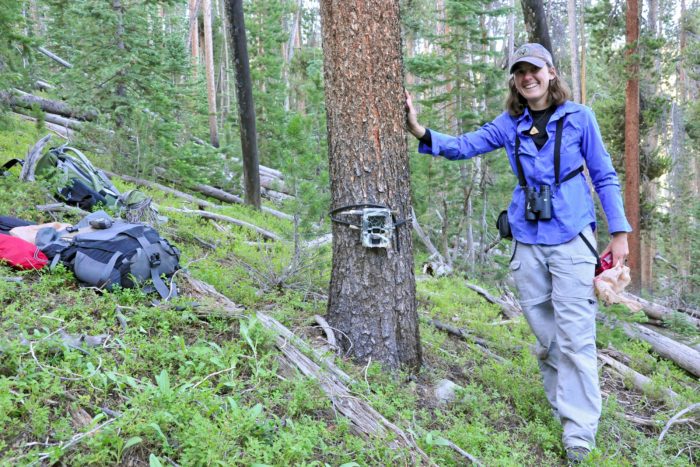 As Colorado’s private and public forests recover from insect and disease outbreaks and other disturbances, humans and wildlife are adjusting to significant environmental changes. Spruce beetle and mountain pine beetle outbreaks may have changed the way you recreate, but have you thought about how wildlife are responding?

That’s precisely the question research scientists from Colorado Parks and Wildlife and the U.S. Forest Service attempted to answer in a recently published paper in the journal Ecosphere: Mammalian responses to changed forest conditions resulting from bark beetle outbreaks in the southern Rocky Mountains.

“It’s such a far-reaching event, both in terms of the amount of the state impacted and how far into the future this impact will ripple,” said author Jake Ivan, a Senior Scientist in the Mammals Research Section of Colorado Parks and Wildlife. “As a first cut, we wanted to try to get a handle on how various species altered their use of these impacted areas, and we focused on lodgepole pine and spruce-fir systems as those two types of subalpine forest were hardest hit [by mountain pine beetle and spruce beetle, respectively].”

To do this, the researchers hired a team of technicians to deploy game cameras at 300 randomly located sites in subalpine forests across the state. The sites represented a gradient of beetle activity from green forests (no beetles) to forests that had been impacted more than a decade prior to sampling. The cameras were mounted low to the ground and pointed at a “lure tree” where a piece of wool, soaked in that most universal of all wildlife lures – peanut butter – was tied. This setup allowed researchers to obtain photos of the various mammalian species living in the vicinity, from chipmunks to moose.

Ungulates were among the big winners in this changed system, although their response varied. Elk, for example, tended to increase their use of impacted areas in the decade after a beetle outbreak, responding most strongly in areas where the beetle impact was most severe (more dead trees). Use of beetle-impacted areas by moose, however, increased immediately after trees died, peaked three to seven years after the outbreak, then declined. Mule deer showed increasing use of beetle-impacted areas with each year after an outbreak, but unlike elk, their use was not strongly related to severity. Researchers attribute increased use to increased forage and hiding cover available as understory and shrub cover increases once the forest canopy opens up.

Red squirrels were among the few species to be negatively impacted. “I imagine their decreased use is largely related to the loss of cone crops, which take a big hit when all of the mature trees in a stand die,” Ivan said. “That’s the main food source for squirrels in these systems, and storing those cones in middens so they can get at them later is what helps get them through the winter.”

While the response of some species is easily explained, for others, an easy explanation doesn’t exist. Pine martens, for instance, commonly prey on red squirrels, yet use of beetle-impacted stands by pine martens did not follow the noticeable decline of red squirrels. Instead, marten use remained completely unchanged through time, regardless of severity of the outbreak.

According to Ivan, “This project gave us a better understanding of what to expect in the coming years as beetles finish their march through the green forests in the state. It gives us a sense of issues that may arise both in the non-game world, and in the game world.”

For instance, results from this project suggest that snowshoe hares, the primary food source for threatened Canada lynx, may weather the bark beetle outbreaks largely unscathed. However, lynx may be at increased risk during years of low hare abundance when they would normally turn to red squirrels to get them through.

On the game side, scientists expect that in some areas, elk will focus their habitat use in severely impacted areas during early season hunts. However, access and travel in these patches is difficult for hunters due to down timber. So, in some places, it’s possible to end up with a mismatch between elk availability and hunter access.

“On the one hand, it is a bit sad to see all of these dead trees on the landscape,” Ivan concedes, “but on the other, we’re witnessing a once-in-a-millennia event, and Colorado is ground zero. It’s quite a spectacle from an ecological perspective.”