Saving the world, one generation at a time 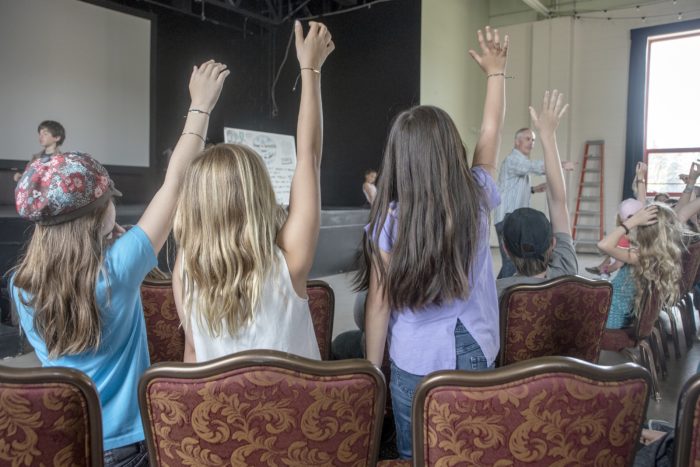 Start a business that saves the world.

That was the assignment Coventure Cofounder and Operations Manager Evan Zislis proposed to Carbondale Community School and Marble Charter School students. And he gave them less than 10 minutes after breaking into small groups to create their business concepts.

“This is not easy stuff,” Zislis acknowledged. “Is it easy to agree with other people in your group?”

He was met with a resounding chorus of nos. And yet, the ideas generated from the exercise were plenty ambitious, from founding an Alaskan ski resort with a fleet of solar-powered helicopters to establishing other-planet habitation methods.

Before charging them with saving the world, Zislis walked students through a lesson that he could have titled “Conscious Capitalism 101,” complete with a case study headed by none other than his 9-year-old daughter, Juniper.

“We’re in trouble because of pollution,” one student offered. Other concerns ranged from a pending trade war with China to global warming.

To demonstrate, Zislis created a hypothetical T-shirt company, with student volunteers representing every link in the supply chain, from cotton farmer to company owner. He detailed the differences between organic and conventional farming and the meaning of fair trade. He also didn’t sugarcoat some of the harsher realities of the current status quo.

“I’m the guy who toils all day … and I don’t have to pay anyone, so I make the most,” the student portraying the farmer said with confidence.

“Do you think the farmer makes the most?” Zislis asked the larger group. This time, the conclusion was affirmative.

“Who among these people usually gets the most? The owner of the company,” he continued.

Zislis contends that the owner of a company can spearhead cultural shifts toward a more conscientious business plan at the very founding of that company. His daughter Juniper has already undertaken such exercises in her own endeavors, Awkward Stuffy Co.

By sewing together parts of stuffed animals that were otherwise falling apart and doomed to the trash, Awkward Stuffy Co. reduces waste. But Juniper goes beyond that in her conscious capitalism — she also gives back to her community.

At that, he taught the group another vocabulary term: philanthropy.

It’s all part of Coventure’s initial plans when partnering with the Town of Carbondale; that is, working across demographic barriers, including generationally. It makes perfect sense to Zislis.

“I need your brains,” he told the students. “The world you grow up in is going to be very, very different than the world I grew up in. I can’t solve the problems that you’re going to inherit.”

Meanwhile, at 418 Garfield Ave., Aspen Center for Environmental Studies (ACES) is partnering with several entities to build something for the more immediate future: the ACES Urban Farmhouse, an affordable employee housing project focused on green building.

Greenline Architects Principal Steve Novy has created an educational opportunity from the project, as well. In a three-part series, he’s allowing others in the building industry — as well as curious members of the public — to attend on-site seminars about the foundations, framing and energy systems that make the development particularly efficient, in both energy and cost.

The Community Office for Resource Efficiency (CORE) awarded the project $20,000, first through a $10,000 Design Assistance Grant and then with an additional $10,000 investment. For Marketing and Engagement Manager Kate Henion, the funding makes perfect sense.

“I think we’re lucky to live in a valley where there are a lot of people and contractors who are thinking about sustainability and energy efficiency, and I also think it’s cool that we have architects like Steve Novy who have the plans and want to just showcase them to other people in their field,” she said. “It’s a real community project.”

Longtime local Kim Stacey donated the land for the Urban Farmhouse, and Clean Energy Economy for the Region (CLEER) is offering continuing education credits for architects who attend the jobsite seminars. Evolve Structural Design, MM Eight Construction and the Town of Carbondale all contributed to making the project a reality, as well.

The second seminar will be from 5 to 7 p.m. April 30 at the ACES Urban Farmhouse, 418 Garfield Ave. (tinyurl.com/SmartDesignSeminars).