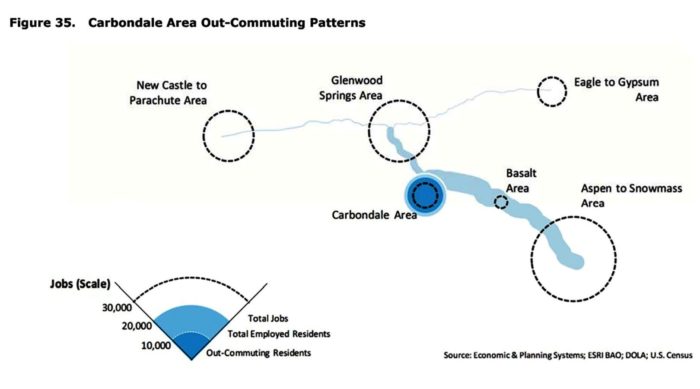 Standard financial advice dictates that one should spend no more than 30 percent of take-home pay on housing. Yet according to a recent housing needs analysis for the Roaring Fork Valley and parts of the Colorado River Valley, residents are collectively overspending that mark by $54 million per year. That money is not being saved for down payments on homes, emergency funds, retirement, or even being spent on more frivolous purchases. It is being lost to non-local interests and corporate coffers.

That finding is one of dozens outlined in the Greater Roaring Fork Regional Housing Study, which relied on data gathered from surveys of 2,111 locals (an unusually high number of respondents). A national economic consulting firm conducted the study, with input from representatives of local municipalities and counties. Although it would be impossible to cover all the findings of the 165-page report, a few key takeaways stand out.

According to the study’s Executive Summary, the valley has a 2,100-unit shortfall in housing for households at 60 percent of the area median income and less, and a 1,900-unit shortfall for households between 100 and 160 percent of that number. That means both people who are just scraping by as well as those doing fairly well for themselves are hard-pressed to find housing.

Astoundingly, more than 26,000 workers cross paths in their commute every day, primarily along the Highway 82 and Interstate 70 corridors, as they leave their area of residence and travel to their area of employment and back. This beehive of traffic impacts roads, quality of life, and the environment, according to the study.

The population is aging and retiring; over the next 10years, the population over 65, which is considered out of the workforce, will increase by 60 percent here. This could have drastic effects on cultural cohesion, as aging individuals will rely more on younger populations who will be even less likely to afford to live here.

Lastly, non-local property ownership and short-term rentals put undue pressure on the housing market which impacts the workforce and the permanent population.

Carbondale in particular is looking unmanageable as a permanent home for anyone but the highest income earners. The average rent reported by respondents is $1,561 per month, compared to approximately $1,231 nationwide (this includes all types of rental situations). The high rental costs added to the generally high cost of living in the mountains makes saving for a down payment on a home difficult even on plush salaries. Considering the average home price in Carbondale is about $720,000, coupled with typical financial wisdom that one should be prepared to make a 20 percent down payment on a home, fully 70 percent of Carbondale survey takers reported they were unable to do so.

“The greater Roaring Fork region would be up there with San Jose, California, and San Francisco, and New York, and every market that has been struggling with affordability,” said David Schwartz, Executive Vice President for the consulting firm during a public meeting in El Jebel. “It’s entirely obvious that the higher the rental rates are relative to median wages, there is diminished ability for people to climb up out of that. I think the trend is perpetual cost burden in this area, where if you cannot get a toehold on ownership, you might never get a toehold on ownership. It’s a travesty, it’s almost a crime, not to allow people this kind of an opportunity.”

Although the economics firm, Economic & Planning Systems, Inc., did not offer any next steps to solve the problems identified in the study, many participants in the audience were vocal about the need for real change to address housing affordability in the valley.

“We have allowed housing to continue to be a fairly parochial issue,” said Carbondale Trustee Heather Henry. “We have now been looking at this housing issue for a generation and a half and have not broken out of that particular mold.” She said that while the valley will continue to make do whether or not these issues are addressed, she pleaded that the community not ignore “some timebombs” revealed by the study.

She spoke of forming a multijurisdictional housing authority to streamline efforts throughout the region, increasing homebuyer education, secure grants to subsidize down payments, and support public/private partnerships. Current land use inclusions to help and support.

“The consideration of doing this collectively is an important one,” said Henry. “We know we do things a lot better when we do them together.”