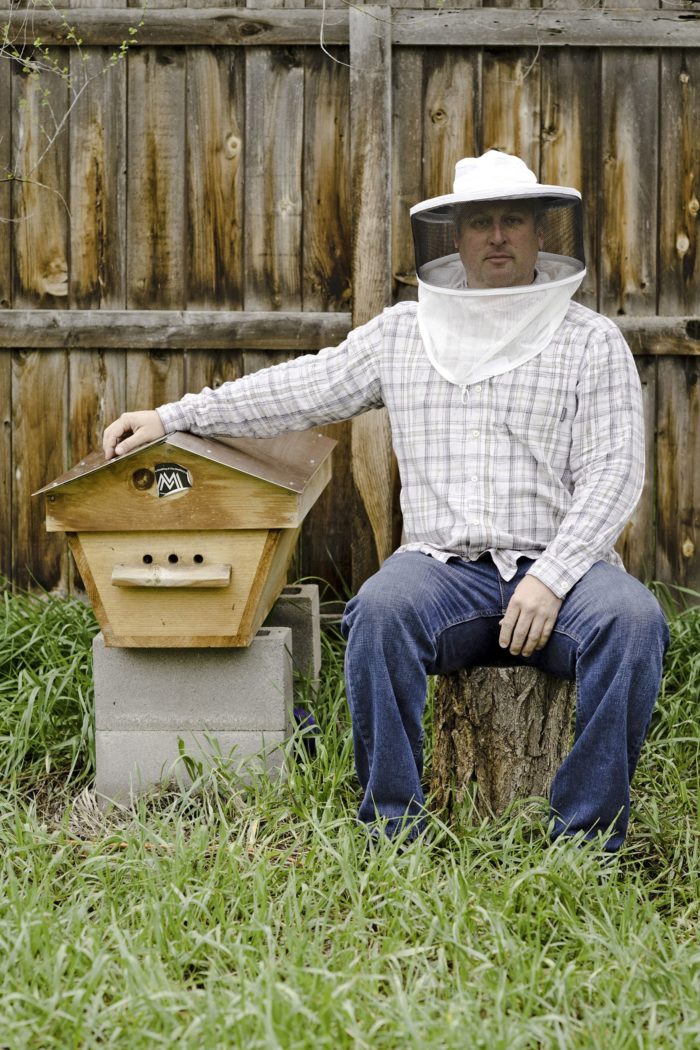 Connie Baker is no longer the only queen bee at Marble Distilling Co. — thanks in large part to husband and co-founder Carey Shanks.

The bees were a birthday present, he said.

“I got … Connie a beehive and the outfit and a book on raising bees and collecting honey and pollen and all that good stuff for her birthday. Since then, we’ve just tried to grow it,” he said.

It took more than a book, of course. In order to ensure they put as much care into their bees as they do their spirits, Baker and Shanks consulted with “Bee Guru” Bob Bailey, as Shanks describes him.

“[Bailey’s] our resident beekeeper,” he said.

Since then, the bees have become part of the family.

“We’ve had them on the roof for a long time, and now we’ve moved them off to a nice spot that makes sense for them,” Shanks continued. “It’s a bit cooler, a bit more hospitable to them having a thriving household, if you will.”

In fact, though Baker talks of future honey-infused vodkas behind the bar at the distillery, the pair’s focus so far has been on creating an optimal environment for the bees themselves — which has so far meant letting them keep their honey.

“The first year we did it, in order for the hive to thrive, Bob recommended that we leave the honey, so that’s what we did,” Shanks said. “We’ll work towards doing the fun things with honey-infused vodka and fun drinks behind the bar, but for now, I think [Baker’s] focus is to become maybe a junior varsity beekeeper.”

There are several ranks of beekeepers, and none of them are easily earned, as Mark Burrows learned when he was going through the University of Montana’s online coursework.

“I got a master’s certificate in beekeeping,” he said. “Got that last summer; I’m happy about that. It was a tough course: you had to buy a microscope … it’s really intense.”

Like Shanks, Burrows became passionate about beekeeping through family. His daughter Tika expressed interest in a class offered by Sustainable Settings. After the first day, Tika’s curiosity had been satisfied, but her father’s had only just been piqued.

“That night, I went home and Googled plans for beehives on the internet,” he recalled. He found a blueprint and built some hives. “My fascination just kept growing and growing,” which led to his finally getting certified. “Apprentice, journeyman and master — each one is two months. [I] went through all three just back to back, and it was so worthwhile.”

Not everything’s coming up roses

“I look at honeybees as the canary in the coalmine,” Burrows said. “We’re watching honeybees disappear; if they’re disappearing, what are all the other pollinators doing?”

And Burrows is committed to all pollinators, in addition to his focused dedication to his honeybees.

“That gets a little complicated because honeybees are a non-native species,” he said. “It’s a European thing. Somebody brought over bees, and once they landed, they propagated because that’s what bees do. There’s some great stories from the Native Americans, they called them the White Man’s Fly. So people kept bees because that’s how you got sugar; they didn’t have cane sugar back then, they didn’t have beat sugar back then. They had honey or maple syrup.”

But eventually, in the mid- to late 1800s, commercial beekeeping became a viable endeavor. According to numbers released in March 2018 by the United States Department of Agriculture, beekeepers with five or more colonies produced 148 million pounds of honey in 2017 — a nine-percent decrease from 2016 production levels.

In addition to a four-percent decrease in the number of honey-producing colonies, the average yield per colony was also down five percent, from 58.3 pounds to 55.3.

Burrows isn’t surprised. In addition to environmental factors, he attributed what he calls “bad beekeeping practices” to the general decline in bee health. Those practices range from disruptive travel to breeding queens with lower immune abilities to protect against predators like varroa destructor.

“The reason the bees are dying are multifold,” he said. “Pesticides, herbicides, fungicides put on the crops … people with Roundup in their backyards, spraying the dandelions, all those things. That’s just one part. It’s also bad practices on the part of the commercial beekeepers. They take too much honey in the fall and then they over winter them with sugar water, which has no nutrients for them, it’s just carbohydrate.”

Shanks and Baker have come to similar conclusions in their own undertakings.

“The reason we put that sugar water out was because there were no blossoms anywhere,” Shanks said of their initial process. “I started the research, and Connie and I talked about it, and we both agreed: we’ll do two feedings, and then we’ll see how they do. Then I cut them off, and they’ve totally thrived . . . Nature rules.”

Getting into beekeeping doesn’t necessarily require a prohibitive monetary investment — Burrows estimated that he spent about $250 per hive and another $130 per three pounds of bees — but it does require time.

“I would say the most important thing you could do is … take some classes,” Burrows said. “Take multiple classes. Don’t watch one YouTube; watch 15 YouTubes from 15 different beekeepers. Beekeepers, they all have their own opinions and philosophies on how to do it. You’ve got to find what’s right for you.”

To that end, Burrows hosts a monthly meetup at 6 p.m. every first Thursday at the Carbondale Branch Library, 320 Sopris Ave., for fellow beekeepers.

And for the more tangentially curious, Shanks emphasized that he and Baker are always happy to show off their newest winged family.

“If anybody ever wants to come learn, we really love to kind of stimulate people’s creativity and excitement, and we love showing them to people when we have time to do it,” he said. “Anybody who ever wants to come by should come knock on the distillery door.”