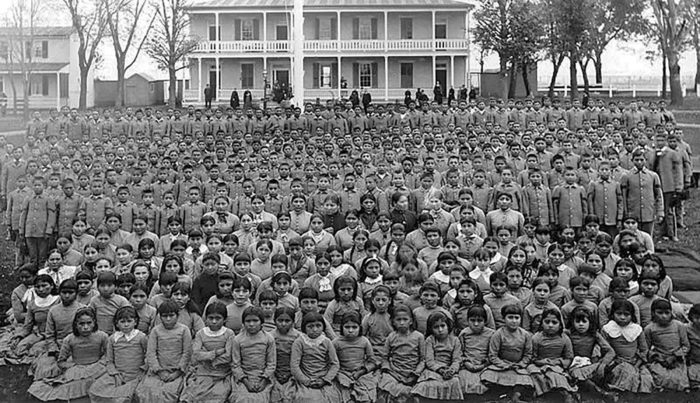 Dave Taylor didn’t have a lot of exposure to the history and current plight of Native American cultures before he began work on “Whitewashed” — and in some ways, that was the point.

“I needed to be invited into the room, and I was,” Taylor said. “All the people that I worked with understood that our intent was sincere. This was not exploitive.”

Anuk Bald Eagle, a Lakota and Northern Cheyenne from Cherry Creek South Dakota, approached Taylor, who runs Cool Brick Studios in Carbondale, after he had produced a CD for a group of drum singers.

“They were looking for a film crew, and their usual crew was busy on another project,” Taylor explained. “I’ve wanted to get involved in film more and more for a long time, and this was an opportunity to bite off a very large topic that needed to be whittled into a story. I never learned this in school. We were taught about the Trail of Tears, but it was like a one sentence thing. The more I got into it, the more passionate I got.”

The project actually predates his already-completed “In the Footsteps of Giants” documentary on black rhino conservation. He’s had plenty of time to begin pulling away his own misconceptions.

“I thought that Native Americans were predominantly on reservations, which is not true. I knew that they had their social challenges, but I didn’t understand the history that led to the poverty and struggles with family and social issues,” he said. “That was by design. From the end of the Indian Wars through about the 1970s, there was a program of forced assimilation. I was never taught this in school. The fact that they’ve been able to rise up out of that at all is miraculous.”

“Whitewashed” explores the psychological and physical impact that kind of campaign can have on generations of people. It touches, in particular, on the fledgling field of epigenetics — the study of how changes during ones lifetime can alter the interpretation of the base code.

“When a group undergoes trauma, especially over a long period of time, it affects how genes are expressed and it gets passed on,” Taylor said. “It’s not just emotional; it’s physical. “Obesity and heart disease and cancer are jump-started through these experience and the propensity is passed on.”

But Whitewashed has a message of hope rather than despair or blame.

“It starts back with the predictions of Black Elk and some of the Hopi that this was going to happen, and it would take so many generations of suffering before a period of enlightenment would begin,” Taylor said. “This is not a ‘beat up the white guy’ film. It’s asking everybody to take an honest look at history, With acknowledgement comes respect, and with respect comes dignity, and with dignity comes strength. Both cultures have something important to offer as we move forward and their own work to do for healing.”

Because of the crew’s personal connections, the subjects of the story are primarily Lakota and Ojibwe, but Taylor thinks it will resonate with members of other tribes and had positive feedback from local Utes when the film debuted at the Shining Mountain Film Festival in Aspen. It also screened at the Durango Independent Film Festival and the Native American Film Festival in San Francisco. The crew also hopes to make it available educationally.

It hasn’t shown in its entirety in Carbondale until now, although Taylor shared the first six minutes as part of a talk at the Launchpad.

“I had so many people that wanted to see the rest of it,” he said.

As such, it will screen at 5:30 p.m. Friday, May 3 at the Crystal Theatre as a benefit for the Aspen Ute Foundation with a Q&A with Taylor and Bald Eagle after.

“Everything I ever do I want to bring to the Crystal if I can,” Taylor said.

Meanwhile, Taylor is gearing up for another documentary on isolated communities coexisting with large predators and dreaming of some fictional film projects — including one about some guys named Carb and Dale if he can find someone to back it.

“I want to do things that start conversations I feel need to be had,” he said. “I like to challenge people to think outside of their comfort zone. That’s how we grow.”