A win for CRMS, a loss for Roaring Fork in at-home playoffs 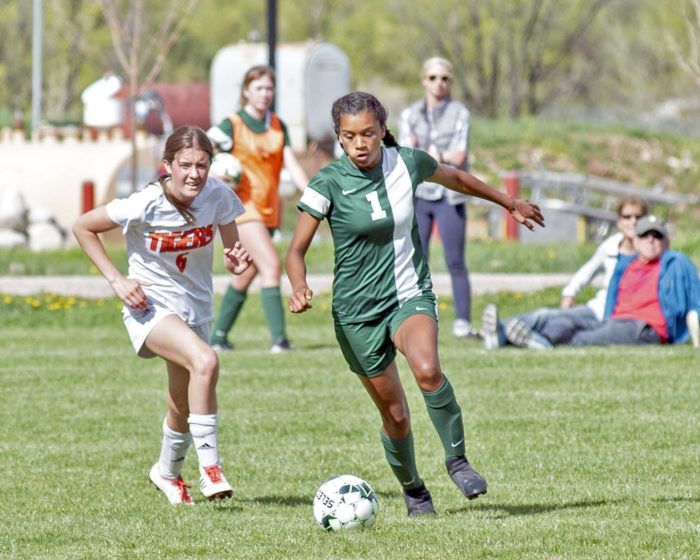 Carbondale had the unusual privilege of hosting two overlapping state playoff games on May 7.

First up was Colorado Rocky Mountain School’s soccer girls. With only two non-league losses to their name — including one to 3A Roaring Fork — the Pearls have led the Western Slope for 2A, so Del Norte had to come to them for the first round.

CRMS took an early lead with a quick point at the start of the game and another unanswered before the half. In the second, however, the Tigers scored three points to the home team’s one, tying things up and sending the game into overtime. The Pearls rallied and clinched a 4-3 win.

Not only are they within striking distance this year, but the girls also have the potential to dominate in future years. While this is the last season for Sophia Jacober, Ella Beck and Macie Brendlinger, some of the team’s top scorers are underclassmen. Sophomore Riley Puckett and Freshmen Zea Anderson each boast 14 goals over the course of the season, with six and eight games played, respectively.

They whole crew will travel to Dawson School in Lafayette for a 4:15 p.m. quarterfinal on May 10. Both teams are 4-0 in league, with Dawson ranked second and CRMS ranked third in the playoff predictions.

The Roaring Fork High School girls’ soccer team, meanwhile, was scheduled for its own away playoff game against Stapleton after press time on May 8. Instead, it was the fledgling varsity lacrosse team that got to start — and, it turns out, end — the playoffs with a home game.

The team, which includes students from Basalt and Glenwood as well as Carbondale, has had a tremendous first season, coming out of the regular season 10-2 in a league that includes much larger schools like Grand Junction and Durango. And once again, there’s plenty of hope for the future. Hanna Feder, Hannah Cole and Francesca Williams will graduate this year, but junior Lecsi Glenn and sophomore Gabby Narby have each averaged 4 goals per game with 12 and 11 games played, respectively.

They met their match in Conifer. The Lobos outscored the Rams 3 to 1 in the first half, and while Roaring Fork rallied somewhat in the second, Conifer continued to pull ahead for a final score of 20-9.

The state track meet, meanwhile, is just around the corner on May 16, although the Rams didn’t place in the Western Slope League.

The one Roaring Fork team still in the midst of its regular season is baseball, with home games against Grand Valley starting at 3 p.m. on May 9 and Basalt at 11 a.m. on May 11. While the boys’ overall record is rather rough, they’re actually 4-3 in league.