Making the best of a rocky situation 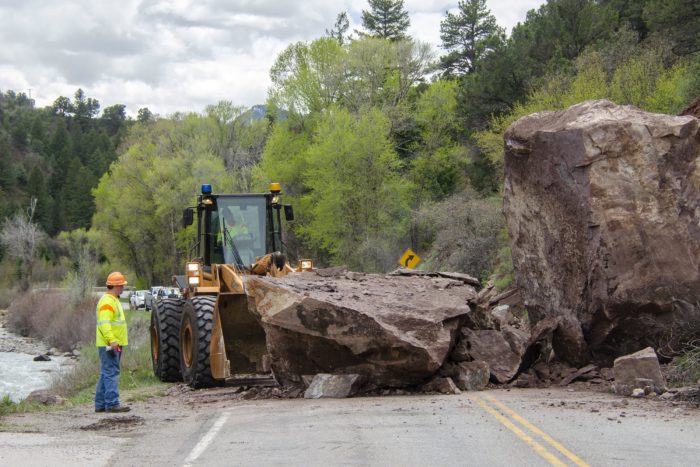 A rock slide closed Highway 133 not far south of Carbondale for three hours on May 11, but the incident just brought residents and visitors together.

No one was hurt when two large boulders and plenty of smaller debris tumbled into the road around 11:30 Saturday morning, and motorists immediately set to work moving rubble out of the road to clear a narrow path between the rocks and the river. Cars took turns inching around as Marco Diaz abandoned his own drive home to direct traffic.

“Somebody has to slow down the idiots,” he said. “They’re most polite, but sometimes you stand in the middle of the road and they blow right by you. Still, it’s nice to be a Good Samaritan if you have the opportunity.”

When official personnel arrived on scene, they stopped the trickle of traffic, fearing that another boulder poised above the slide site might still pose a threat. With an uncertain prognosis for reopening, folks started to make plans. Law enforcement and first responders were staged on each side of the closure, and stranded drivers on either side began offering each other rides or just meeting up in between.

Kriselle Csere was not only able to arrange a pick up after her grocery run into Carbondale with her four kids, but found friends and strangers carrying her bags through the closure.

“People just started helping and there was a small food parade, which was really nice,” she said. “There’s a really good sense of community up here. It made my Mother’s Day.”

After a geologist gave the all clear, a dozer was brought in to clear the smaller of the rocks, opening a real lane to allow alternating traffic beginning around 2:30 p.m.

According to Colorado Department of Transportation Spokeswoman Tracy Trulove, temporary signals will be in place until Monday morning, when more resources will be brought in to fully clear the road.