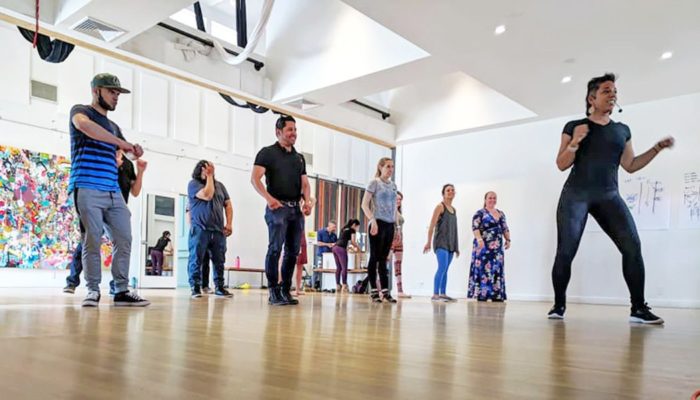 Está bien si no habla inglés — no lo necesita para bailar. Similarly, it’s fine if you don’t speak Spanish; it’s not a prerequisite to move your body. At Mezcla Socials, the only language that matters is dance.

Sometimes, it’s salsa. Other nights, it’s bachata. Regardless of the style being taught, though, Thursday nights at the Launchpad are all about having fun and connecting with others, Mezcla Managing Director Claudia Pawl says.

“Whether you leave being all fancy with 15 moves or you only get one move, whatever makes you happy makes us happy,” she said.

Pawl co-founded Mezcla with her husband Brian about four years ago. It was a natural extension of their shared love not just for dance but the community it creates.

“Today’s my nine-year anniversary with my husband,” she said in a May 9 interview. “We chose to just marry ourselves and take off to Hawaii for a salsa festival. It was the best experience ever!”

Since then, thanks in large part to social media, the Pawls have found themselves immersed in a global community of dancers and dance enthusiasts. Through Mezcla, the couple is able to host visiting instructors and special events in addition to the regularly scheduled classes.

But it’s also about bringing Latino and Anglo communities together — because while they may share geographical proximity, there’s still a cultural segregation that permeates the Valley, Pawl noted.

“It’s because of access; it’s because we don’t present the opportunities for people to mingle, to come together,” she said. “I think Mezcla is the best way that we can do our part to make that happen.”

A big part of accessibility, she continued, is ensuring that classes and socials are not cost prohibitive. Another is communicating to people in their native languages.

“Everything I post in our group is bilingual,” Pawl, who works as an interpreter, said. “It’s very lengthy, and I know that’s probably not the ideal way of promoting, but I don’t care. I’m going to get the message out. And if I know an extra language, I throw it in there, too.”

The group’s most recent social was in Basalt, at CC’s Cafe, for $8 per person. Pawl acknowledged that for parents especially, an admission rate is a small part of a night out: there’s also the babysitter.

“It adds up,” she said. “We made a decision a long time ago that we were going to make it accessible. For the first couple of years, we would actually have donation nights.”

Pawl knows all too well how high the financial barrier of entry can be to learning dance. During her childhood in Tepic, Mexico, Pawl became an avid folklorico dancer because it provided performance opportunities without the price tag of formal training.

“Then I moved here,” she said. “I was 11. One of my best friends, she was [dancing] professionally in Chihuahua, and so when she moved here, too, she wanted to continue doing it. So it was a bunch of kids teaching each other. There were maybe 10 Latino families at the time.”

Still, those middle-school days cultivated a lifelong passion in Pawl. But she’d never tried anything like salsa until her adult life, at Jimmy’s in Aspen.

“I grew up with Ranchera and banda, which is more traditional music in Mexico. I’d never stepped into that world and was just looking for something to do,” she said. “I fell in love with it instantly, and I wanted more of it.”

Now, through Mezcla, she gets plenty of it. And, just as her friends did for her in middle school, she’s able to share dance with those around her from all different circles.

Brandon Jones, for instance, is an enthusiastic champion of the group.

Jones is usually on the trail — he’s the hike lead at Wilderness Workshop, after all — but when he talks about Mezcla, it’s clear he’s adept on the dance floor, too.

“I’d say … salsa’s been my favorite. It’s the most foreign, so I’m learning the most,” Jones said. “But I’ve only been to one, two salsa classes. I’ve been to eight bachata classes.”

Pawl sees opportunity to use Mezcla as a way of reaching the younger generation, too. When the group was invited to participate in a flash mob as part of the 5Point Festival, she found that her most eager dancers were students. “My core group was the kids from Stepping Stones. They were so beautiful, and they were so excited!” she recalled.