Learning to paint out loud 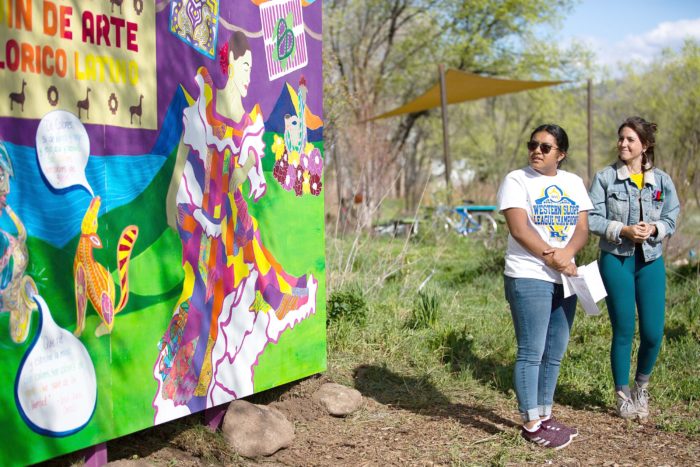 As a young woman who describes herself as “a very quiet person,” Tansy Zacarias seems to have surprised everyone — including herself — by leaving her mark on Carbondale with a large mural in bright, bold colors at the intersection of Eighth Street and the Rio Grande Trail.

A graduating senior at Roaring Fork High School, Zacarias created the mural for her senior capstone project. “I never thought I’d be able to put my ideas out into something so big,” she told The Sopris Sun.

She originally planned to curate a one-woman show for her capstone, featuring pieces from her AP Art class. Her project took an unexpected turn when she connected with her capstone mentor, Valerie Rose, through Carbondale Arts. Rose convinced Zacarias that together they could take on a more ambitious project with a more prominent and permanent end-product: a mural for Carbondale’s Latino Folk Art Garden.

Thinking of her own experience in high school, Rose recognized how intimidating a project like this could be for a young artist. “ I was really insecure,” Rose told The Sun, “I would have been terrified by the thought of working on a project so big that everyone could see.”

Rose had always loved drawing, but kept her artwork confined to her sketchpad. After graduating from college with a degree in Geography and Environmental Studies, she traveled to Nicaragua and worked as a bartender for seven dollars a day. Living in “a very open and welcoming community,” she explained, people noticed how much she loved drawing and encouraged her to paint one of her drawings on a wall.

That first successful mural opened the door to more opportunities, and she began painting murals in exchange for meals or a room to sleep in. After painting seventeen murals in fourteen months, and selling some of her illustrations for the first time in her life, she began believing in the possibility of making her living as an artist. A passionate environmentalist, Rose also started seeing her murals as a powerful medium for spreading important messages.

Painting a mural can be a daunting experience not only because you’re displaying your art in such a public way, Rose explained, but also because planning and designing a mural can be a long, complicated process. Rose showed Zacarias how to take a seemingly overwhelming project and break it down into a progression of manageable steps.

The two agreed on the goal of representing every Latin American country in the mural, “even if it’s just something small,” Zacarias told The Sun, “like the pattern on a woman’s dress.”

They each researched the folk art of different countries, then decided together which images and design elements to include. After completing the drawings, they re-sized them and combined them to create the overall design.

Stepping Stones, a youth mentoring program, donated their basement as a working space during the winter months. Using a small-scale sketch of the mural, their next step was to project this image onto four large wooden panels — a process which proved to be more challenging than either of them anticipated given that the panels were too large to stand upright in the low-ceilinged basement.

“The fun really started when the painting began,” Zacarias said. Many community members — young and old, Latino and Anglo — participated in the project during a series of community painting days.

“I wanted to use bright colors,” Zacarias said, to convey “a happy feeling and warmth from all the different countries.”

The mural was unveiled as part of May’s First Friday event. Zacarias had not seen all the panels of the mural put together, or even known exactly where the mural would be located, until she arrived to give her presentation that evening.

“It was weird to drive up and see it so prominent,” she said. “It feels weird to be so known.”

Zacarias chose to give her presentation about the mural in Spanish. Rose translated her words into English as well as American Sign Language. A child of two deaf parents, Rose’s first language is sign language.

“The whole point of the mural was to make people feel more included in the community,” Rose said, “so having the presentation in three languages was a part of that.”

Zacarias is thrilled with how the mural turned out, noting that “it ended up representing not just Latino folk art, but joy in general.”

Zacarias plans to attend Southwestern Community College in California next year. She’ll be living with her father, and is already thinking about the mural she’d like to paint on her new bedroom wall. She plans to minor in art and pursue a career in the medical field.

“It’s such a gratifying experience, giving someone something you wish you had when you were their age,” Rose said, “knowing it can change them as a person.”