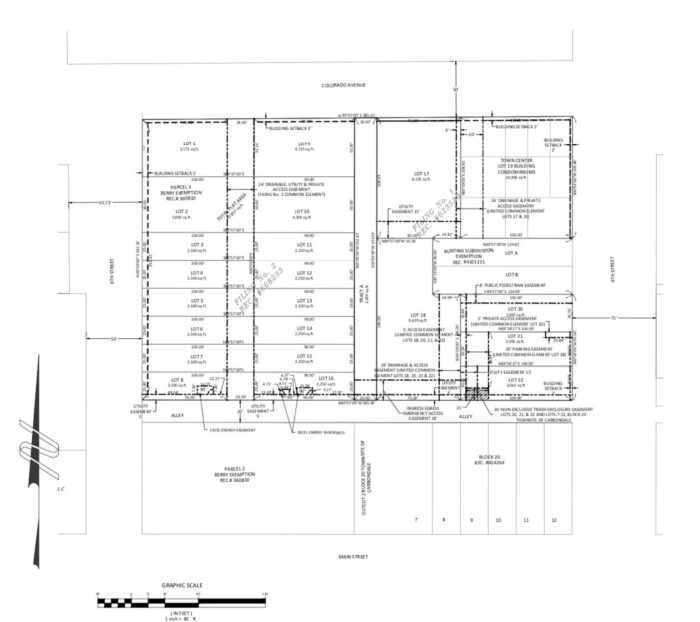 n otherwise straightforward transfer of ownership opened up a broader discussion at the May 14 Carbondale Board of Trustees meeting.

When the Bonanza Trailer Park — located between Fourth and Sixth streets on Colorado Avenue — was bulldozed to make room for the Town Center Development in the mid 2000s, the plan called for numerous buildings to front a promenade from Main Street. The Town took ownership of the section between Main and the alley adjacent to the Dinkel Building, but the owners association was left in charge of the northern half of the walkway, with just a pedestrian and utilities easement for access.

The Thunder River Theatre was the only building constructed along the promenade — with the Greenline Architects building taking a spot on the corner — before the whole project went belly-up during the recession. The remaining lots were later purchased by Pickwick Holdings and are among numerous downtown properties currently up for sale through Aspen-based realtor Karen Toth. All the Dickensian LLCs have shared an ownership address tenuously linked with Bren Simon — a wealthy local known for both her philanthropy and privacy — but her name was never mentioned as Chad J. Lee of Balcomb and Green addressed the board on the LLC’s behalf.

With a potential sale pending, the proposal before trustees was to dissolve the association, eliminate design guidelines in favor of the Town’s Unified Development Code, and turn the ownership and management of the promenade over to Pickwick — which already has a majority vote in the HOA.

Lee pointed out that the organization hadn’t operated, collected assessments or issued encroachment licenses in years. In fact, its sole recent action was a vote on dissolution which, though not unanimous, was approved.

“We had two folks who just didn’t participate in the meeting, so it’s not like there were two opposition votes out there,” Lee explained.

Town Attorney Mark Hamilton also pointed out that any future subdivision of the property would likely result in a new HOA — although he later clarified that Thunder River Theatre would not necessarily be included unless both owners wanted it to be. TRTC Director Corey Simpson declined to take a strong stand on the proposal, noting that the organization hadn’t been ready to participate in the vote but had been told by legal council that there were no obvious issues.

Steve Novy of Greenline Architects, however, had concerns.

“I would urge you strongly not to do it,” he said. “If this is the way this parcel is going to get developed — with this type of legal backroom dealing — it’s going to be really disappointing.”

For Charlie Lozner of Backbone Media, it was the perfect opportunity of a larger dialogue about the area. That wasn’t an issue for the board, however.

“The decision has been made,” Lee said. “This is a private sale between Pickwick and the buyer. The Town’s not implicated at all except this minor plat amendment.”

On that front, the main hangup seemed to be the process for other businesses to make special use of the promenade. The parties had originally considered having the Town issue licenses but, according to Town Attorney Mark Hamilton, that created a host of liability issues.

“We’d be granting licenses on someone else’s property,” he said.

After some discussion, the staff and board hatched a plan that Lee seemed amenable to: languaging stating that Pickwick won’t unreasonably deny licenses for customary private uses of town sidewalks.

Pending the proposed changes, the agreement was approved unanimously with Heather Henry absent.

Meanwhile, the Environmental Board had hopes that trustees would back a ballot issue to expand the scope of the Town’s plastic bag ban.

More than 100 locals had signed their support for the measure at Dandelion Day — with many expressing surprise that the ban currently only applies to retailers the size of City Market — and many businesses were already taking steps to eliminate plastic and styrofoam, according to Sandy Marlin, who joined fellow E-board members Patrick Hunter, Frosty Merriott and Colin Quinn in making the pitch.

“I think it’s time to take this next step,” Merriott said. “In a fairly short order, we ought to be discouraging the use of all single-use plastic where we can.”

He pointed out that Kroger is planning to go plastic bag free anyway, and that revenues generated by the paper bag fee would likely go away as a result.

The board, however, wasn’t sure the proposal was ready for prime time. Trustee Ben Bohmfalk, in particular, didn’t think it went far enough.

“I want to be really seriously honest with ourselves about our main goal here,” he said. “I get a little bit cynical about things that feel symbolic.”

The E-Board, however, felt that a small step in the right direction was better than none at all, and Sarah Teague and her fellow Colorado Rocky Mountain School students agreed.

“It’s not going to be the crowning achievement, it’s a step along the way,” she said. “If we’re trying to get people to accept an all-over single-use plastic ban… We kind of have to ease people into this.”

For Mayor Dan Richardson, that wasn’t the only issue.

“I’m nervous about the burden we’re putting on businesses without hearing from them,” he said. “I don’t want anyone blindsided by this.”

He also cited Henry’s absence as a reason to continue the discussion to another day, which the board ultimately did.

After an extensive executive session, the board did enable staff to pursue a piece of property on Eighth Street, which would be used as staff housing until such time as it might be useful in a connection with Industry Place.