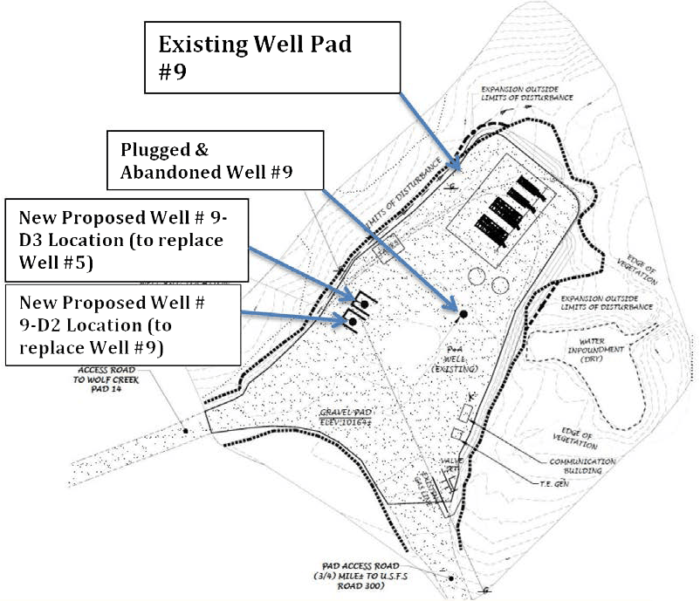 The wells will replace two of the 10 existing wells in the 9,524-acre unit that was first established in 1961. When gas production depleted in 1973, it was converted to a natural gas storage field — that is, gas is pumped into the ground in the summer and stored for winter extraction, when demand is higher.

As of December 2018, there are no plans to frack the wells, according to an email to The Sopris Sun at that time from Black Hills Energy Manager for Community Affairs Carly West.

“The wells that are being replaced are injection and withdraw wells, through which odorized, pipeline-quality natural gas is injected into the storage field during off-peak times and withdrawn during the peak season…” it read.

The wells were originally drilled in 1965 and 1967. In its application to the Pitkin County Planning and Zoning Commission in March, Black Hills Energy outlined the need for replacing the two wells.

“The two new storage wells … were deemed to be necessary when inspections of the existing [wells] identified corroded casing and outdated emergency equipment, both of which were considered to pose public safety and environmental concerns,” it maintained.

“The new wells will be drilled within the existing well pad locations and won’t increase the facility’s footprint,” according to the Black Hills Energy website.

However, not everyone agreed with the methodology. The Crystal River Caucus expressed deep concern about Black Hills Energy’s water and air monitoring plans during the project.

“Basically, the bottom line of what we said was that for what Black Hills had submitted to the county, we remained concerned about the potential for groundwater contamination and air pollution that could occur and would go undetected,” Board Member Kate Hudson said during a caucus meeting earlier this month. “The periodic monitoring that Black Hills had submitted was insufficient to mitigate the danger we felt this facility posed.”

“The County and Black Hills have been working with the Crystal River Caucus since December to review the proposed storage well replacement,” she wrote in an email. “As a result, Black Hills/Rocky Mountain Natural Gas has developed a robust air and water quality monitoring program, and my understanding is that it addresses Caucus concerns.”

The project will start mid-June and continue throughout December of this year, according to the March proposal. Black Hills Energy anticipates that the wells, each with an approximate 5,200-foot depth, will have a 30-year usage lifespan.

Four Mile Road and 300 Road will see an uptick in traffic at the beginning and end of the project — up to 15 trucks per day are anticipated during drilling and up to 18 per day in early September, the estimated timetable for well completion. Additionally, Black Hills Energy estimates it will need to house 25 temporary employees in the area during the six-month project duration.

Locals and recreationists will still enjoy access to surrounding National Forest System lands during project implementation, though a site-specific closure order will be in place at the pad location during drilling operations for public safety.

More information on the project is available at fs.usda.gov/project/?project=55571, and project updates will be available at blackhillsenergy.com/wolfcreek.