Locals reconnect with family in the Aosta Valley 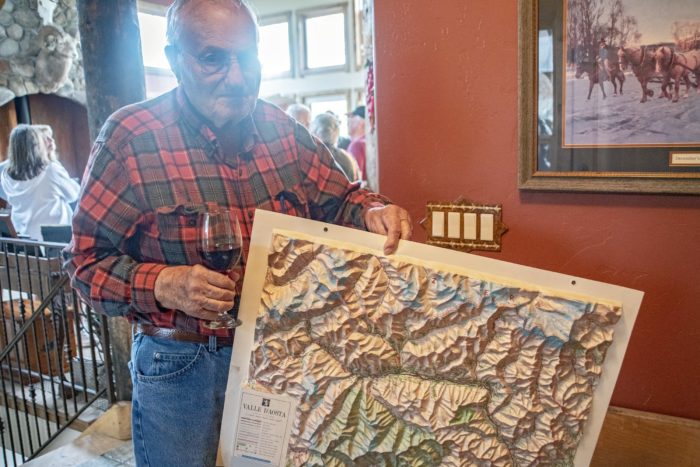 When Daniele Treves came to the Roaring Fork Valley to work at the marble quarry, he didn’t expect to find a host of last names from his home back in the Aosta Valley of Northern Italy.

He soon learned, however, that the majority of the early families to stake claims in the area were Italian, and many of those were Aostan. Even those unfamiliar with the people themselves have likely seen them on a park, a business or a mark on the map: Arbaney, Berthod, Cerise, Darien, Diemoz, Gerbaz, Gianinetti, Glassier, Grange, Jammaron, Natal…

Thanks to longtime local Mike Ferguson, who worked at the quarry and knew many of the area oldtimers, Treves and his family have now met many of the area Italian Americans and have become part of the broader family. A new chapter is being written, however, with Aostan filmmaker Gianfranco Vanzetti — most of the locals just call him Frank — in town to make a documentary for Italian television.

The old timers who actually moved from Italy are all gone now, but some of their children are still alive, and even have first cousins back in Aosta. Several such patriarchs were among the assembly at the Jammaron Ranch on May 19 as the families socialized and told their stories.

The Jammaron name, incidentally, is closely associated with a drainage on the backside of the Matterhorn known for the production Fontina cheese. The Aosta Valley as a whole borders both Switzerland and France, and has periodically belonged to different empires over the years. It would also look awfully familiar to a Carbondalian, according to Leo Jammaron.

“It’s roughly the same size, shape and climate of the Roaring Fork Valley,” he said. “The four heighest peaks in Europe are all right there.”

Leo’s grandfather was one of the first folks from the area to try his luck in the New World — though it didn’t stick — and his mother was one of the last adults to come over. She’s taught him the Patois — the local dialect — and instilled a sense of history in him. He has since been back to visit on several occasions.

Ed Grange, too, made the trip, including one with around 20 relatives in tow. He got to visit the church where his dad had been baptized and attended a family lunch with nearly 100 others.

“They were so glad to see us,” he said. “You kind of lose track of everyone when you get down to cousins, though.”

Julie Stutsman — who is both an Arbany and a Gerbaz on her mother’s side — remembered her parents having a similar experience.

“They couldn’t speak to anybody, but they just fed and fed them,” she said.

The same could be said of the families on this side of the Atlantic. While Sunday’s gathering wasn’t nearly on the scale of the annual Italian picnic in Glenwood, the old traditions were on display. The Jammarons brought out their famous sausages, which the old timers recalled hanging from the rafters in every cellar. Others contributed wine or grappa and Treves’ Fontina polenta was a crowd favorite.

Perhaps less appetizing to the general public was a discussion of how the early settlers ate groundhogs and used the fat to preserve their leather. That’s one detail included in Floyd Diemoz’s extensive history of the Aostan emmigration to the Roaring Fork Valley. He’s not ready to share the rest in the paper (we hope he does, someday), but he’ll probably tell you about it if you ask him.

Otherwise, the documentary should be posted to Vimeo in the fall.