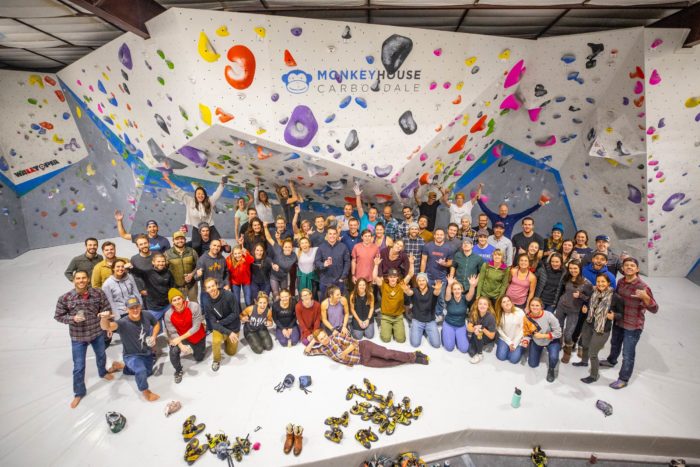 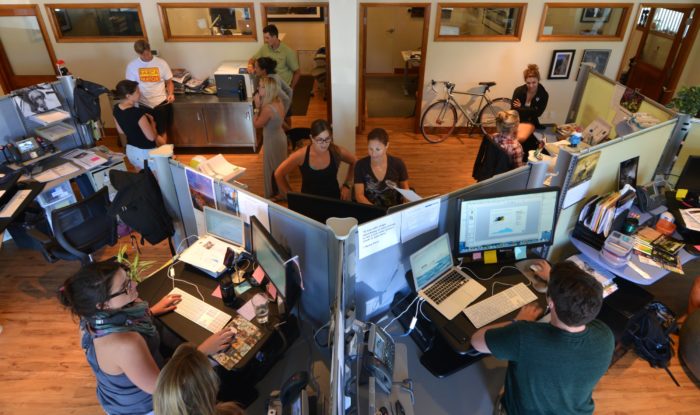 Today’s active lifestyle consumer market is “so happening, bro,” as the saying goes. Gone are the simple days when a few companies like North Face and Patagonia supplied the world’s gear to what was then considered the nuttier segment of society, those who were ditching the standard 9-to-5 jobs to pursue lives that allowed ample time for nontraditional outdoor sports. Crazy, right? Transition to today, when Colorado alone can attribute $62.5 billion to the outdoor recreation economy and activities like winter fat biking, para-skiing, and free solo rock climbing are on the menu. There are many reasons for those developments, but one significant factor was the revolution in marketing invented by companies like Carbondale’s Backbone Media.

For founder Penn Newhard, the sport of choice was climbing. In 1989 he moved to the Roaring Fork Valley as a Wall Street refugee and went to work as an advertising sales director for Rock and Ice magazine. He became immersed in the outdoor industry and noticed that nobody was working with brands to create “editorial coverage,” what lay people might recognize as the rad adventure stories involving gear that convince them to try it themselves. Traditional advertising was “silver,” according to Newhard, but “great editorial brand or product story was gold.” He concluded that people in the know made gear and clothing choices based in large part on what their friends recommended; conversations over beer were more influential than staged iconic images in magazines, however glorious.

Newhard’s vision, then, was to bring that concept to the industry. He saw an opening and thought, “Why don’t we just try this?” In 1997, along with business partner Lisa Raleigh (who also worked at the magazine), Newhard set up shop in a 250-square-foot space in the basement beneath Peppino’s Pizza on Main Street. Using two old doors as desks, a couple old phones and a fax machine, they started pitching potential clients.  Around this time, Nate Simmons was completing his MBA at the INSEAD business school in France (casually referred to as the Harvard of Europe). He desperately wanted a job in the outdoor industry and was willing to make just about any sacrifice to get one. He was not pleased to discover, however, that the anti-corporate culture of the industry was hurting his chances. “The last thing they wanted was an MBA on staff,” he recalled.

Luckily, his roommate was Penn Newhard’s cousin, and he spent significant time with the family. Though he didn’t know Newhard personally, Simmons accepted an invitation to Carbondale where he found himself interviewing for a position at Backbone Media while chopping wood at Newhart’s cabin.     Though Simmons ultimately left to travel abroad, when he received word some months later that Backbone’s role with Black Diamond was expanding and he would have a place at the company, he cancelled a trip to India and arrived back in Carbondale with a duffel bag. Simmons said his pay initially was scant, “But it was awesome! From a lifestyle standpoint it was everything I thought it was going to be.” They instantly got to work building the company.

Applying lessons from the trail

ears after the company’s founding, Backbone Media still retains its independent, work hard/play hard vibe. Their spacious office across from Town Hall is populated by quietly working, fit-looking young professionals. Exceptionally nice bikes and skis are daintily tucked away. The company has been featured in Outside’s Best Places to Work for four of the past five years, and ranked 20th nationwide in 2018. Employees have access to a gear closet filled with the latest products from the company’s clients, kombucha and craft beer on tap, Blue Bottle espresso, and plenty of whiskey and tequila on hand. Their robust client list includes Yeti, Eddie Bauer, Gerber, Big Agnes, and Klean Kanteen, among many others. Newhard and Simmons wore sandals and plaid shirts and offered me espresso as they explained Backbone’s keys to success. A recurring theme was their core belief that the lessons learned on the trail, while adventuring, are highly applicable to their professional space. In business, you have to commit, Newhard explained. Too many new businesses, he maintained, are baking in exit plans without bracing for the ride ahead.

But “that’s like talking about a pre-nup before marriage without falling in love.” He avoids “bragging on the bus” about his success, but attributes it to “respecting the process. The end result is due to the detail.” The pair laughed about some of their early media successes, like burying a writer in the snows of Mount Hood, Oregon for the first Avalung demonstration, which was picked up by Dateline Television. Or partnering with Polygamy Porter beer and poking fun at Utah by creating the tagline, “bring some home for the wives,” which was picked up by The Economist. The “furor that it created was so fun for us,” said Simmons. It helped them realize that “with a great product, you can make this happen.”

In the formative years, Backbone strove to simply outperform the competition. “We were always gonna be the agency that showed up,” said Simmons. “We really wanted to hustle.”  As their client base expanded, they diversified the types of brands they work with. Now, it’s all about inclusion. “We were skiers and climbers and hikers. Now a lot of our business is in hunting, angling, travel and tourism, and libations. Our purview is anyone who likes to go outside, do some outdoor activity, and maybe have a cocktail at the end of the day,” said Newhard. They enjoyed some notable milestones in their timeline that helped broaden the business.

Greg Williams came on board and advocated to take on media planning and buying, helping brands determine a target audience, when and how to reach it, how much to spend, and then make the buys. This year, Backbone expects to purchase approximately $45 million worth of advertising. “That’s a significant spend just for the active lifestyle consumer,” said Simmons. Soon after Williams’ advent, Ian Anderson joined the team. He was working at the Vail Chamber and established a relationship. He wanted to move to Carbondale, and was offered a job overseeing the Public Relations side of the business, where he quickly was “instrumental to leading by example.” Finally, in 2016 Backbone hired Charlie Lozner, who brought an impressive skill set behind direct digital and email marketing that is credited with transforming the business. Both Penn and Nate continue to foster a strong appetite for their favorite outdoor sports, as do their employees. It’s hard to tell the difference between work and play, profession and passion. “There’s a blurred line that’s a beautiful thing,” said Simmons.

At home in Carbondale

Backbone has more than sixty employees, some of whom work from a Denver office. But the core of the operation remains in Carbondale, and they hope to keep it that way. Though they acknowledge the difficulties with affordable housing for their employees, they believe that “Carbondale has a great feeling.” Its close proximity to Red Hill, Spring Gulch, and Prince Creek make it ideally suited for the business. “We’re a compelling story to the town,” said Simmons. “We’re bringing young, talented, bright community members.” Newhard agreed, and pointed towards the ancillary economic benefits the growing, if still small business has brought to the community: “It’s a big jigsaw puzzle, and it’s fun being a couple pieces.”