CPAC gears up for next Art aRound Town 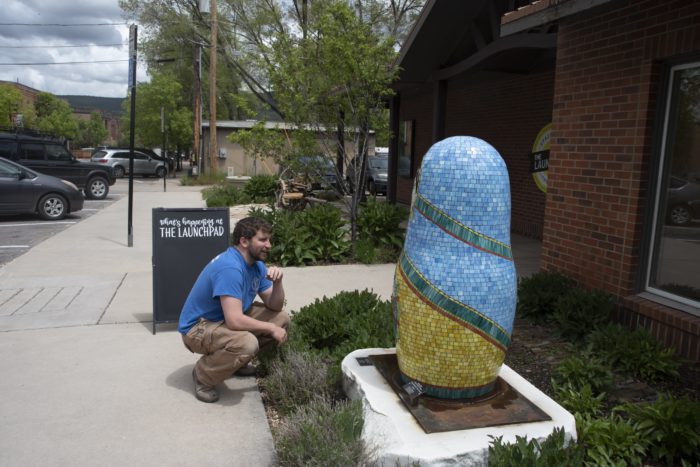 It’s easy to not realize just how much work goes into Art aRound Town, Carbondale’s rotating sculpture exhibit, even when town itself is literally changing around passersby.

Carbondale Public Arts Commission (CPAC) Chair Sarah Moore admitted that even she gets caught up in the surprise of seeing new sculptures installed, and she’s one of the first people to know the schedule.

“I think they do seven or eight installs each day for, like, three days,” she said. “One year, before I was on CPAC, they did some type of covering of them, which was kind of fun. And I do think that unless you happen to do the loop, you’re not going to see them all anyways unless you come on the walk.”

CPAC does everything it can to create an anticipation around the culminating Art aRound Town Art Walk, which this is year on Thursday, June 6. The full loop is a little more than a mile — but you don’t have to walk it in order to enjoy it.

“This year’s walk, we have a van from the rec center. It’s harder for some of the older people, and it gets to be long when we’re walking all the way to the library and to Snowmass [Drive],” Moore said. “And I always, always recommend people bring bikes and stuff.”

Longtime Art Walk veterans will recognize some of the artists’ names featured in the upcoming exhibit, but that doesn’t mean they’d recognize their work. CPAC jurors didn’t.

“We blind jury,” Moore said of the selection process. “Especially if it’s a piece we don’t recognize the work, we don’t even know if they’re local. Alicia’s [Matesanz de las Heras], because it was so different than her last, we had no clue it was her. It’s interesting.”

Of the 15 sculptors, the majority are from Colorado (and three are local to Carbondale). This rotation, however, includes pieces from artists in New Mexico, Minnesota, Maryland and New York.

“That’s the farthest we’ve had, I think, ever,” Moore said of the New York artist.

Then there’s Reno Carollo from Aurora, whose participation in Art aRound Town has been a long time coming.

“We accepted him a few years ago, and he had a show opening somewhere else in Colorado, and they wouldn’t let him show it here,” she said. “So we’re excited, because we’ve been kind of waiting for him to be able to be back in.”

And in the case of Carbondale’s Mark Cesark, even CPAC members are in for a surprise — in a rare exception, the jurors agreed to accept the artist’s concept maquettes before the piece’s actual completion.

“We don’t normally accept [that], but because we’re very familiar with his work, we allowed it,” Moore said, noting that Cesark currently has a sculpture displayed on Highway 133. “It’s on loan. We don’t pay him anything; he just likes having it there. He’s done so much for us.”

That’s true of many, many local artists, Moore emphasized.

It’s that support that allows CPAC to expand the already prolific public art display throughout downtown.

“We’ve been lucky with the support we get from the local artists,” she said. “We’re hoping to put two or three additional pieces along Third Street. They’re not part of the show, but they’re part of Art aRound Town, and they’re local artists.”

“We had two extra pieces of marble and the space,” Moore said of the idea to add pieces to Third Street. “Everyone we talked to was thrilled about it.”

Where: The group will meet at Carbondale Town Hall, 511 Colorado Ave., then begin the 1.2-mile tour of the 15 installations. Bikes encouraged!