From Bridges to RFHS, Bair prioritizes compassion in principal role 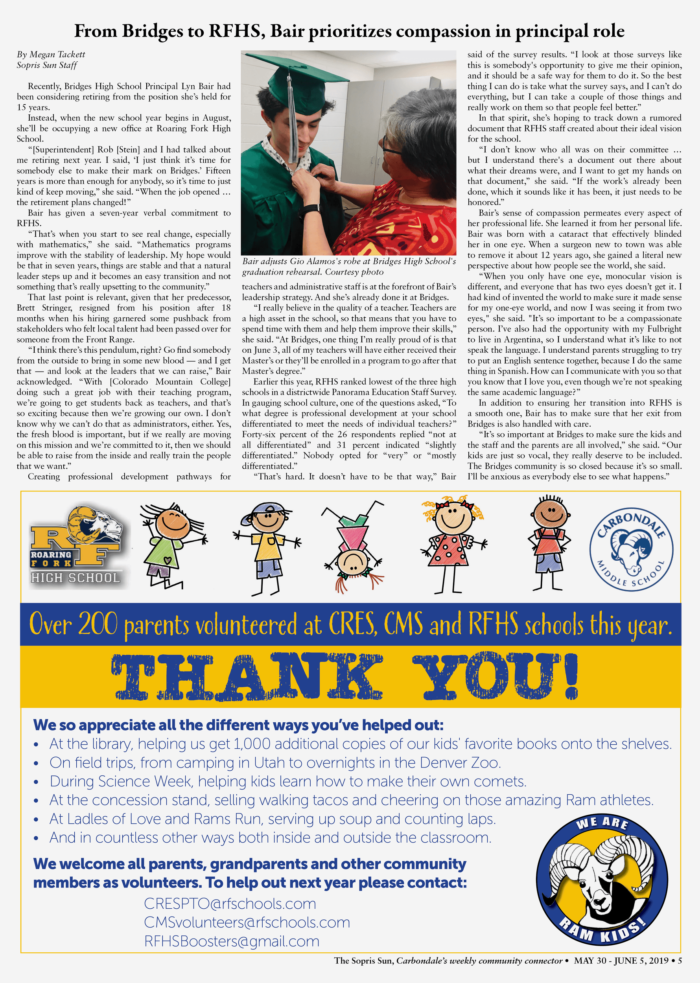 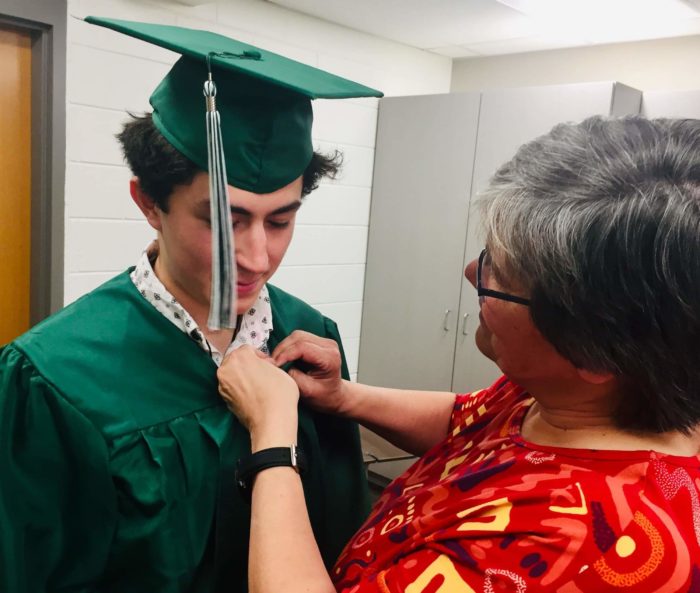 Instead, when the new school year begins in August, she’ll be occupying a new office at Roaring Fork High School.

“[Superintendent] Rob [Stein] and I had talked about me retiring next year. I said, ‘I just think it’s time for somebody else to make their mark on Bridges.’ Fifteen years is more than enough for anybody, so it’s time to just kind of keep moving,” she said. “When the job opened … the retirement plans changed!”

Bair has given a seven-year verbal commitment to RFHS.

“That’s when you start to see real change, especially with mathematics,” she said. “Mathematics programs improve with the stability of leadership. My hope would be that in seven years, things are stable and that a natural leader steps up and it becomes an easy transition and not something that’s really upsetting to the community.”

That last point is relevant, given that her predecessor, Brett Stringer, resigned from his position after 18 months when his hiring garnered some pushback from stakeholders who felt local talent had been passed over for someone from the Front Range.

“I think there’s this pendulum, right? Go find somebody from the outside to bring in some new blood — and I get that — and look at the leaders that we can raise,” Bair acknowledged. “With [Colorado Mountain College] doing such a great job with their teaching program, we’re going to get students back as teachers, and that’s so exciting because then we’re growing our own. I don’t know why we can’t do that as administrators, either. Yes, the fresh blood is important, but if we really are moving on this mission and we’re committed to it, then we should be able to raise from the inside and really train the people that we want.”

Creating professional development pathways for teachers and administrative staff is at the forefront of Bair’s leadership strategy. And she’s already done it at Bridges.

“I really believe in the quality of a teacher. Teachers are a high asset in the school, so that means that you have to spend time with them and help them improve their skills,” she said. “At Bridges, one thing I’m really proud of is that on June 3, all of my teachers will have either received their Master’s or they’ll be enrolled in a program to go after that Master’s degree.”

Earlier this year, RFHS ranked lowest of the three high schools in a districtwide Panorama Education Staff Survey. In gauging school culture, one of the questions asked, “To what degree is professional development at your school differentiated to meet the needs of individual teachers?” Forty-six percent of the 26 respondents replied “not at all differentiated” and 31 percent indicated “slightly differentiated.” Nobody opted for “very” or “mostly differentiated.”

“That’s hard. It doesn’t have to be that way,” Bair said of the survey results. “I look at those surveys like this is somebody’s opportunity to give me their opinion, and it should be a safe way for them to do it. So the best thing I can do is take what the survey says, and I can’t do everything, but I can take a couple of those things and really work on them so that people feel better.”

In that spirit, she’s hoping to track down a rumored document that RFHS staff created about their ideal vision for the school.

“I don’t know who all was on their committee … but I understand there’s a document out there about what their dreams were, and I want to get my hands on that document,” she said. “If the work’s already been done, which it sounds like it has been, it just needs to be honored.”

Bair’s sense of compassion permeates every aspect of her professional life. She learned it from her personal life.

“It’s so important to be a compassionate person. I’ve also had the opportunity with my Fulbright to live in Argentina, so I understand what it’s like to not speak the language. I understand parents struggling to try to put an English sentence together, because I do the same thing in Spanish,” she said. “How can I communicate with you so that you know that I love you, even though we’re not speaking the same academic language?”

In addition to ensuring her transition into RFHS is a smooth one, Bair has to make sure that her exit from Bridges is also handled with care.

“It’s so important at Bridges to make sure the kids and the staff and the parents are all involved,” she said. “Our kids are just so vocal, they really deserve to be included. The Bridges community is so closed because it’s so small. I’ll be anxious as everybody else to see what happens.”