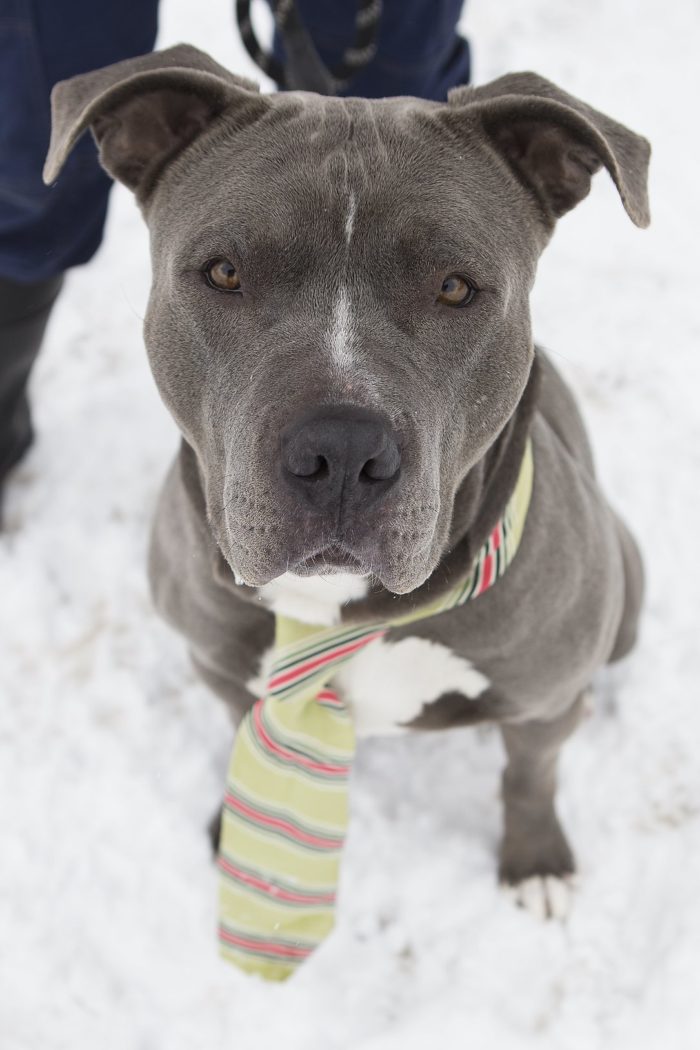 “You can drink a cup of coffee while taking him for a walk.”

Of all those dogs, Baskin said Burt has the best leash manners.

The average stay for a dog at CARE is two to three weeks but Burt has lived there for closer to thirty-six weeks.

He was an “intact stray” – meaning, he had not been neutered – when he came to CARE more than 250 days ago.

“A real wild child,” said shelter manager Maggie Niehoff. “He had concerning behaviors, like jumping up and grabbing people.”

She said he wasn’t aggressive, “He just didn’t know his own size.”

Burt is chunky and muscular. At two years old, he weighs 80 pounds.

Niehoff explained that Burt’s lengthy stay at CARE has been good for the dog. “It’s helped him settle down and get training,” she said. After nine months of training and daily walks and hikes, Burt just received a Canine Good Citizen certificate.

Burt has progressed to day hikes up Red Hill and field trips to Aloha Mountain Cyclery in Carbondale. Now, he’s ready for a home with an owner who will continue to work with him, go for hikes, and give him his favorite treat: “puppachinos”, cups of whipped cream from Starbucks.

And then, there are the cats. Sleek, striped, short-haired tabbys. Three of them: Bonnie, Clyde, and Missy.

Bonnie and Clyde are a team. They must be adopted together, which may be why they’ve been at CARE for 56 days, twice as long as the average cat.

Bonnie is declawed, which makes her an indoor kitty. She weighs about 15 pounds. Her brother, Clyde, is, frankly, huge. They both have dark markings and tiger stripes on their faces.

They were dropped off at CARE when their owner moved away and a roommate couldn’t keep them. Shy at first, Bonnie and Clyde have come out of their shells with all the attention they get at the shelter.

“It takes longer for cats to get used to a space,” said Wes Boyd, CARE director. That means they’ll need some quiet time at their new home with lots of attention and treats.

All 29 cats at CARE are spayed, well-fed and cared for with clean digs and plenty of toys and the occasional treat.

Some live in the “Cat Room”, a large, open, indoor space with kitty jungle gyms, places to hide, and plenty of room to roll around and play. It’s commonly known that it is easy for a cat-person to fall in love with all those friendly, snugly, purring bundles of fur. 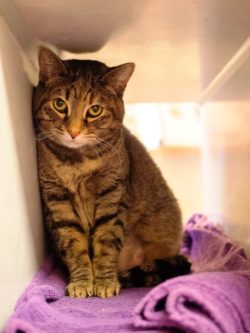 From quick observation, the queen of the cats seems to be Missy. The other cats might not think so, but she does. She’s been at CARE for 167 days and shelter workers say it’s a mystery why no one has snatched her up.

At five years old, Missy is a chatty katty; she’s good at making friends and getting her needs met. The vet techs say she’s fun and playful, sort of the life of the party.

“She likes to be the center of attention,” said Allie Kurzka, lead vet tech. And, the green-eyed tabby’s gaze is transfixing.

Missy prances around the hallway behind the front cat area every morning, checking in with staff and generally surveying her realm.

“She’s independent,” says Kurzka, concluding that Missy would do well in a home with her human all to herself.

More information about Burt, Bonnie, Clyde, Missy and other CARE animals is at colorado animal rescue.org.