Grads from three schools head off into the world 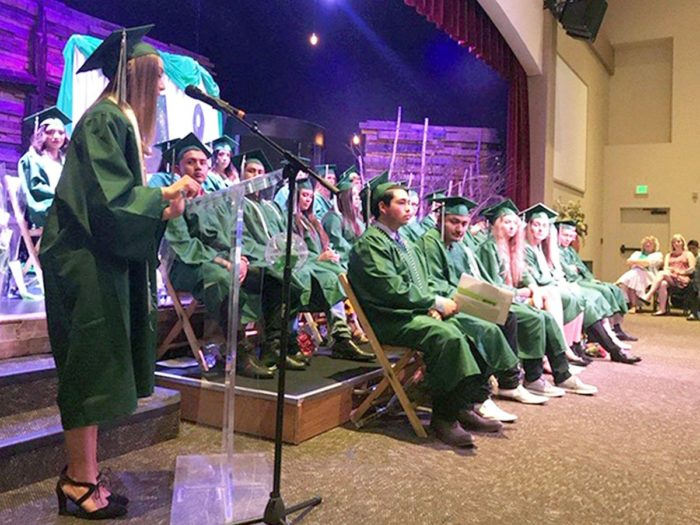 Graduation caps have been thrown by Roaring Fork and Bridges High School seniors, and Colorado Rocky Mountain School’s ceremony is this weekend. There is a lot to celebrate, so we caught up with a recent or soon-to-be graduate from each of Carbondale’s schools to learn about their plans and what advice they’d give the underclassmen.

At 18 years old, Max Candela is already an experienced welder. And plumber. And landscaper.

“My parents … they want me to just go out and learn stuff instead of staying in a restaurant,” he said. “And I did that.”

“I want to do pig welding,” he said. “What I’m doing right now on my job is construction welding. That one is more difficult because you have to figure out measurements, and you’re around more finished stuff. If the walls are finished, you have to protect the walls.”

And he’s taking what he’s already learned on the job into his future studies.

“One of my teachers told me when you’re welding and there’s big gaps in your weld, that has something to do with your heart rate. The smaller the weld is, the slower your heart rate,” he noted, adding that the work can feel meditative when done well.

He’s not ruling out possibly opening his own forge one day, but for now, Candela’s looking at the more immediate future.

“It seems like a lot of work, but I feel like I can do it,” he said of becoming a business owner. “I just want to get whatever I can, then when I’m kind of done, then I’ll open one.”

As far as his time at Roaring Fork High School, Candela learned that in order to make the most of what happens in the classroom, first you have to show up. And it’s often the classes that feel the most difficult that end up being the most rewarding.

“My anatomy class, that was hard,” he reflected. “But I passed with Bs. Not the best but, it was difficult for me. I kind of didn’t want to show up, but when I was in class, I was like, ‘I actually like this class.’ I enjoyed that class. That’s a class I’m going to look back at.”

Courtney Hassell will be heading to the Pacific Northwest, where she’ll be attending Linfield College in McMinnville, Oregon, which awarded her a music scholarship. An avid painter and poet, Hassell will be pursuing a minor in music art to complement an education major.

“Both of my parents have been teachers before. It’s funny because they both tell me, ‘Do something better for yourself,’” she laughed. “To me, it’s a lot bigger than the salary. It’s about being the one person that a student needs. There’s always one teacher that somebody connects with more than the other teachers, and I want to be that for other people.”

While Hassell says she had some wonderful teachers at Glenwood Springs High School, too, it was her time at Bridges that made her fall in love with education as a career choice.

“I faced a lot of bullying at Glenwood, and it was really hard to come back from that,” she said. “Honestly, there were a lot of times that I didn’t even think I would graduate. Bridges kind of saved me and realized not everyone was like that. We’re kind of accepting of everybody there. It’s like a family.”

In that regard, she hopes other students will be able to appreciate the good times in their high school careers while maintaining a larger perspective when things feel tough.

“I guess my biggest advice would be that … as real as it is, high school isn’t how the rest of your life is going to go,” she said. “Your whole life isn’t going to be based on popularity and cliques and who’s best at sports and who’s top in all their grades.”

Although, she quipped, it was a particularly good moment when the Bridges rugby team came in third in the state.

“It was crazy because basically the whole team, none of us had played before. It was kind of the underdog situation; we kind of came out of nowhere.”

Like Hassell, Macie Brendlinger will also soon call the Pacific Northwest home, as she’ll be an incoming freshman at Puget Sound University in Tacoma, Washington.

Brendlinger is certainly no stranger to travel, though — she only just returned from a trip to Nepal.

“I worked in the school in Nepal, and just comparing that to the education that I’ve received at CRMS, it’s mind blowing,” she said. “We’d walk into some classrooms, and teachers would be sleeping, there wouldn’t be a teacher there all day, it’s just … to have the type of education I’ve had at CRMS, I feel so lucky.”

Brendlinger’s interests vary, but at their core is a deep desire to help others.

“I’m looking at nursing, pre-med or environmental policy. I can’t really decide which one I want to go with because I want to help people but I want to help the planet at the same time,” she said, adding that since her time in Nepal, she’s also considering social work.

She credits her time at CRMS for that sense of compassion. It also helped her find and develop her own voice.

“All-school meetings are my favorite time at CRMS. Everyone gets together and addresses gratitude, accountability … and anyone’s welcome to come up to the mic, and you don’t ever get judged for what you say. You can say anything. I’ve actually gone up there and cried. Totally take advantage of going up and saying what you have to say because everyone’s so accepting there. Everyone will understand what you’re saying and not judge you, and it just feels better when you say it.”