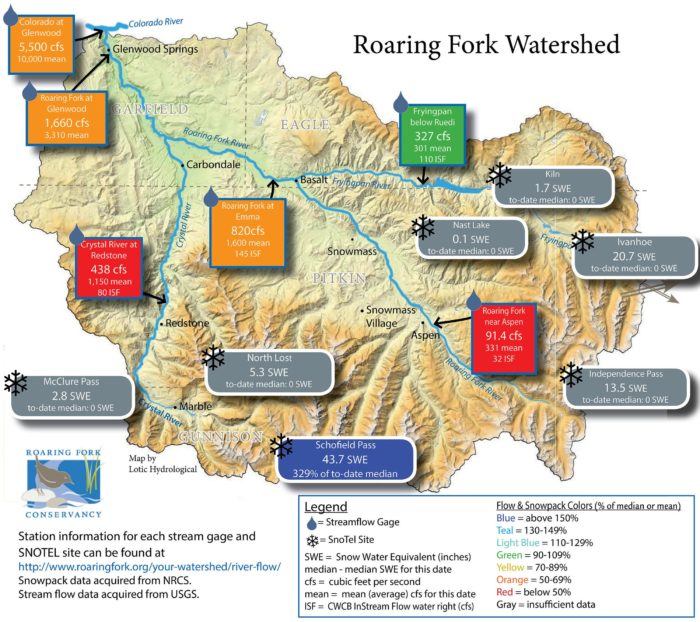 Yes, there’s a lot of snow in the high country. No, that doesn’t mean all our water woes are over.

Social media is awash with figures describing snowpack at more than 400 percent of normal for this time of year — which is true, but only to a point. The Roaring Fork Conservancy has stopped including median values in its weekly snowpack and river report because it’s “no longer a reliable indicator of conditions.” That’s because the snow has often already melted this time of year, making the baseline for many SnoTel sites around zero. That discrepancy is reflected in the streamflows, which are near or below 50 percent of normal.

Both figures are likely to change drastically when runoff begins in earnest, and several meetings have been scheduled to help inform and prepare residents.

First up is the State of the Rivers meeting from 5:30 to 7:30 p.m. Thursday, June 6 at the Third Street Center. With presentations from Colorado Division of Water Resources, the Roaring Fork Conservancy and the Colorado River District, it will address snowpack and runoff on a local and regional scale.

“I think it’s very important to be able to see the watershed for the creek,” said Zane Kessler, a spokesperson for the Colorado River District. “We’ve seen some abnormal late season snow that’s going to help us out through the summer, but it doesn’t change the fact that throughout the Colorado River Basin we’re in the midst of a 20-year drought.”

And even if water resources remain the same or improve, Kessler noted, use is likely to increase with rising temperatures, a longer growing season and population growth.

“We’ve got more straws going into the drink everyday in a system that’s arguably overallocated already,” he said.

And while a high runoff year may help fill reservoirs and increase soil moisture, it also has some potential downsides.

Carbondale and Rural Fire Protection District met with Crystal Valley Residents after press time on Wednesday to discuss the potential for flooding. According to Fire Chief Rob Goodwin, parts of Redstone Boulevard, the BRB / KOA campground and the highway near Hayes Creek Falls all have a history of overflow during high water.

“I hope the big takeaway is that people are educated, pay attention to weather alerts and have their go-kit, just like for a wildfire,” he said.

Carbondale Fire will also be involved in a community meeting to discuss the potential for flash flooding and debris flows in the Lake Christine Fire scar at 6 p.m. Monday, June 10 at the Eagle County Annex building in El Jebel.

“You’ve got areas up there that have been burned pretty severely and it affects the soil’s ability to absorb water,” Goodwin observed. “It’s typical burn scar action, but the problem is it’s near and above populated areas.”

Avalanches and landslides have, in fact, proved an issue all over the state this year, and just this week the U.S. House of Representatives passed the National Landslide Preparedness Act, which authorizes a landslide hazards program to identify, map and research landslide hazards. The House has also considered bills to increase resources to combat wildfire. While many are sighing in relief on that front compared to last year’s fire bans and water rationing, but Goodwin encouraged folks not to get complacent.

“We had a really wet spring, so that tamped down the early fire season, but everything is growing like crazy. If we have a dry week or two in June or July, fire danger will be very elevated,” he said. “Pay attention to campfires, open burns, smoking, four wheelers out in the weeds, chainsaws — all those things. Make sure your home is mitigated as well as it can be. If you have questions about that, we’re happy to come walk through it with you.”

The bottom line, in his book, is, “participate in your own safety.”