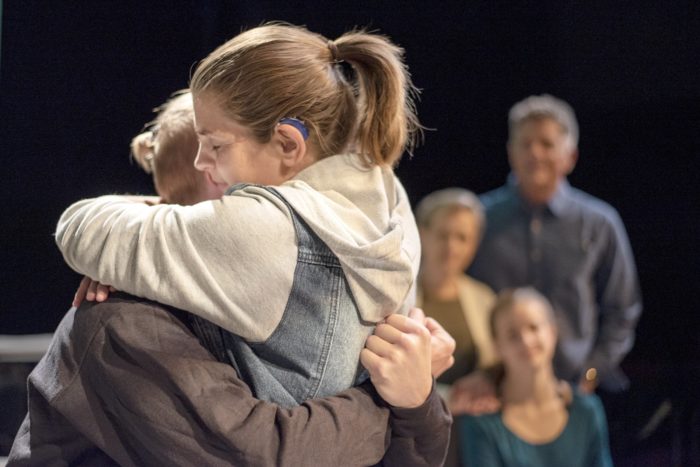 It would be easy to think the aptly named “Tribes” is a play about the deaf community.

The lead character is deaf, after all, and much of the set is dominated by screens that host projected surtitles. But to limit the show’s scope to one community would be a mistake, Thunder River Theatre Company Executive Director — who also directed “Tribes” — Corey Simpson contends .

“[Playwright] Nina Raine’s intention was not to create a piece that was specifically about the deaf community. She really was watching the dynamics of families and people who love one another and how mean we can be to them — and how difficult it can be to apologize,” he said. “And that was really the basis for this piece. Then she researched and got to know the deaf culture because that seemed to tie into a lot of the issues she was looking at. It definitely takes a look at that question of how, even within certain tribes, you have subtribes.”

By choosing this show for the theatre’s season finale, Simpson, too, found himself getting to know the deaf culture. And that proved incredibly challenging in the Roaring Fork Valley.

“When I started, I had no prior experience with the deaf community. And it became apparent really quickly how much a lack of resources that we have in our valley for the deaf and hard of hearing,” he said. “I spoke with someone who used to work for the Aspen Deaf Camp who’s since moved to Austin because of her experienced frustration with not having resources here. When I asked her, ‘Are there any certified interpreters that I can reach out to locally?’ she said, ‘Nope!’ As I continued that research, I discovered that not only do we not have any certified interpreters in the Roaring Fork Valley, there isn’t a single resident, certified interpreter on the entire Western Slope with the state. It’s insane.”

Ultimately, Simpson found an interpreter based in Denver who’s done work at the Arvada Center for the Arts and Humanities.

It’s a dynamic that many hearing people take for granted, he continued. Michelle Mary Schaefer, the Austin-based guest actor who plays Billy, recently experienced that firsthand at Carbondale’s Crystal Theatre when she tried to see a movie.

“I … did contact the Crystal Theater about their captions per their website which they advertised it wrong making me think they have open captions but it was a Captiview device (I hate it) but realized they had it for two years and I was the first person that used it,” Schaefer, who is deaf, wrote in an email. She found herself completely unable to enjoy the movie and even left feeling a little insulted. “Saying ‘hearing impaired’ … is offensive to us, we would respectfully be called Deaf or Hard of Hearing,” she said.

Of course, it’s a matter of education. Simpson and Schaefer’s castmates have also had to navigate a new way of communication during the rehearsal process.

“Each of us has made mistakes,” Simpson said. “There was a night where … the cast had requested an extra day of rehearsal. So we had this quick conversation … and Michelle had no idea that rehearsal was happening because we hadn’t had a specific awareness that one of us needs to be facing toward her. That was pretty hurtful to her because we weren’t including her in that moment.”

Sitting in most rehearsals, though, laughter is the more common expression.

“I did make a mistake the other night where I meant to make the sign for ‘not,’ but instead I used the tips of my fingers, which is something altogether different,” Simpson recalled with a smile. “And Michelle’s eyes got so huge and she burst out laughing, and so did all of the rest of us. Everyone in that room has amazingly positive intentions and open hearts, and we all love Michelle dearly and it was incredible getting to know [translator] Valerie [Rose], but we talked about it as a cast that we knew we would step in it every once in a while and to please forgive us, too.”

Talk to the hand

It’s just one more way that the fiction mirrors real life. Forgiveness, after all, is an underpinning of “Tribes.” But many of the family dynamics explored in the narrative hit close to home for Schaefer, as well.

“It’s been a very emotional process for the cast, I think in part because Michelle’s personal story is so close to Billy’s,” Simpson said. “And actually, the translator that was working with us is what’s called a CODA (Child of Deaf Adults), and her experience is almost identical to Sylvia’s. To have the two of them there working with us on it makes the piece so much more personal. To realize that this is a very real experience that happens still in the deaf community on a daily basis, where even close family doesn’t want to learn to communicate … that’s amazing to me.”

Actors Brittany Dye and Dana Gaubatz, like Simpson, have learned some sign eagerly. Dye had to, as her character Sylvia is fluent, and she didn’t feel that simply learning gestures without their meaning would be authentic. Gaubatz’s character, Billy’s protective brother Daniel, battles his own communication barriers.

“Though the show seemingly revolves around the story of Billy, as an actor, you must always approach the work as though you are the hero of your own story,” he said. “The character of Daniel is particularly challenging because of his what are called in the acting world impediments. Daniel’s impediments throughout the show include intoxication, getting high, taking antidepressant drugs, developing a stammer and hearing voices. In my research, I found that a potential diagnosis of hearing voices is the loss of hearing. I became much more empathetic … to their struggles and have embraced the ASL form of communication.”

In the show, Daniel’s stammer eventually evolves to the point that he becomes functionally nonverbal. That breakdown, too, requires translation for audiences. Again, Simpson knew when to recruit help. Aspen Santa Fe Ballet Operations Manager Jessie Douglas created and manages the surtitles for the production.

“Logistically, it’s really exciting because we are opening it up not only to the hearing community, but also being as inclusive as possible to the non-hearing community,” she said. “Just even the place of the slides or the speed of how the slides come up, I’m really playing off of how the actors are portraying those words, and it’s been a really nice collaboration between Corey and our non-hearing performers to really be able to execute their creative choices. So I think the slides are very important in way of supporting their performance.”

Though Douglas has stage managed “Tribes” before, it’s her first time running the surtitles. Similarly, Schaefer has played Billy three times before — but always as a male. Thunder River Theatre’s iteration will be the first time Billy is a woman.

“[Shcaefer] sent me a video of another production she had done … and she is really convincing as a male,” Simpson said. “But she has another gig coming up after this that she couldn’t cut her hair for, and it wasn’t a decision I’d even made until she was here. But once she got here and we started, I was like, ‘Why are we doing that?’ It’s really new. It can’t be the same Billy.”

Yes,  that means the romantic relationship between Billy and Sylvia is a lesbian one. But that’s not the point.

“Why, when there’s a gay or lesbian relationship in a piece of art, does the material and content then have to focus on that as the issue of the piece?” he said. “I love that in this iteration, it’s just a lesbian relationship, and it’s never discussed; it’s never questioned; it’s not a problem; it’s not an issue. It’s about the play itself. And all art should be that way.”