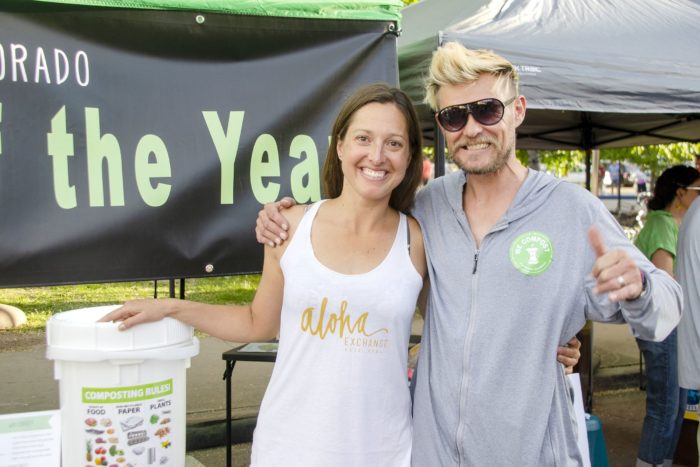 Local residential and commercial organics collector EverGreen ZeroWaste was presented this week with the 2019 Recycler of the Year award at an annual summit for statewide organization Recycle Colorado.

EverGreen was founded by wife-and-husband duo Alyssa and David Reindel in 2011 and has grown steadily since. The company hauls organic waste five days a week from hundreds of households from Glenwood Springs to Aspen, as well as large commercial clients like schools, restaurants, and grocery stores as far as Vail and Eagle. In addition to its hauling services, the company offers “zero waste” solutions for events and a robust outreach and education program.

“We were nominated by EcoCycle, which was an honor because they’re world-renowned,” said owner Alyssa Reindel, who got her start in the industry working for Boulder’s EcoCycle but eventually left to launch EverGreen. “People always thank us for the service, but we couldn’t do it without them. Seeing how this has impacted our community and how excited people get about it has been rewarding. It’s really amazing to enable our neighbors to be able to keep these resources out of the landfill. It’s humbling,” she said.

The Reindels married in Redstone in 2004 and became familiar with the area. Through her work at EcoCycle, Alyssa Reindel became aware of requests by event planners in Carbondale and Aspen for zero waste services. Suspecting a market and receptive culture existed, the pair headed west to start their homegrown business. David Reindel began curbside organics collection surrounding Earth Day in 2011. At the time, they only had five subscribing households and were both working other jobs to support themselves. They imagined the organics hauling would be confined to a sideline activity.

Instead, word spread and business grew, and EverGreen ZeroWaste saw subscriptions rise in Carbondale, and then Basalt and Aspen.

In 2015, the company partnered with Pitkin County and the City of Aspen for the “SCRAPS” program and received a substantial grant that allowed for the purchase of bearproof carts, dumpsters, and the first compactor truck. With a better infrastructure in place, the business was poised to take off.

“Our numbers went off the charts that year… we had a waitlist of customers,” said Reindel. Though a condition of the grant was that EverGreen create a full-time driving position, the increased volume in fact allowed them to hire two drivers. The company now also employs an outreach and education specialist, as well.

Reindel believes the recipe for success has been in their highly approachable, hands-on philosophy and demeanor. EverGreen strives to educate and engage their customers and the public at large, spreading the wisdom of reduce, reuse, recycle, and compost. The Roaring Fork Valley, she says, has many residents receptive to that message who are willing to adopt changes in their shopping, consumption, and disposal habits to send less waste to the landfill. She estimates her customers reduce their landfill contribution by two-thirds on average.

“Most haulers will just hand out a bin and say ‘we’ll be back in a week to empty that,’ said Reindel. “We don’t do that. We outfit our customers with education, guidelines, stickers, and collection bins so that compost has it’s designated spot and it’s very clear.” Additionally, her staff make it a point to attend conferences and keep up to speed with the latest trends and technology developments in waste diversion.

The company also has a strong presence in local schools, educating students and encouraging them to develop thoughtful habits (and hopefully spreading those to their parents).

“We’re really proud of the culture change that our program brings,” she said.

Another component of EverGreen’s activities is helping create a zero waste experience at local events (the industry standard for “zero waste” is actually about a 90 percent reduction in landfill waste — some trash is unavoidable). Last year, the company contracted for 27 events. This summer, they have already had a presence at the Ragnar Relay, Crown Mountain Balloon Fest, and Thompson Historical House party, and are gearing up for Strawberry Days and Aspen Ideas Fest, which both draw many thousands of attendees.

“We set it up so that everything being given to the customer from the vendor can be composted or recycled,” said Reindel. She hopes the exposure to her techniques gets people thinking more critically about their domestic habits, as well.

“David and Alyssa have worked tirelessly to change the culture and awareness related to waste in the communities they serve, institutionalizing the highest standards for waste diversion in their community,” says a statement on Recycle Colorado’s website. “It’s a program that continuously offers upstream-purchasing guidance, indoor collection bins, educational sorting guidelines and labels, bilingual participant trainings, environmental benefits analysis and more, all complimentary with their weekly compost collection service.”

An $18/month subscription for EverGreen ZeroWaste’s organic hauling services is available at https://evergreenzerowaste.com or by calling (970) 987-3140.