Examining grief through a new lens 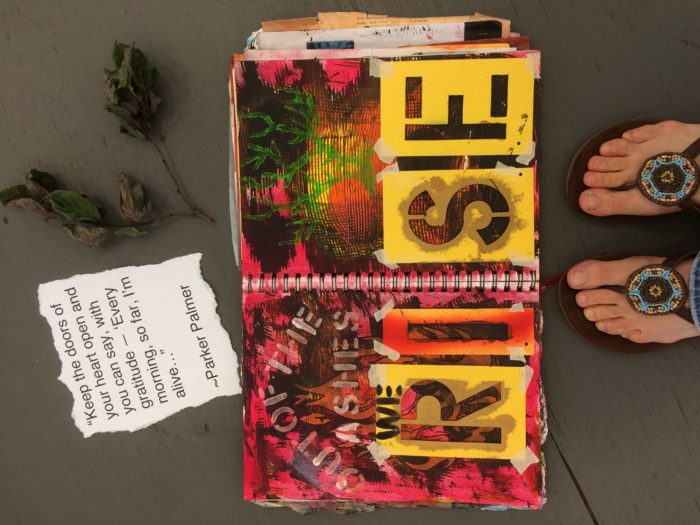 Nobody who helped organize the June 5 panel discussion about the healing powers of grief expected people to leave the True Nature kiva feeling inspired, but that’s exactly what happened.

“I couldn’t believe it, it’s such a counterintuitive response to something like grief,” True Nature Events and Programs Manager Stefani Soychak remarked.

Another development she didn’t anticipate? The conversation to turn toward a larger discussion about mental health. But We Are Designed to Heal founder Charles Morris wasn’t surprised. In fact, he said, that was one of his original intentions.

“[I] started having a conversation with … the MidValley Medical Center, and we were talking about the elephant in the Valley, which is suicide,” he said. “It seems to me that there’s plenty of organizations that are confronting this — big organizations, lots of money.”

Morris began chatting with leaders of smaller organizations in the area, and after about a dozen or so talks, he came to a conclusion.

“There was a sense that these large organizations are kind of siloed,” he said. “So I said, ‘Maybe we should try to do the opposite: grassroots.’”

From there, he had the idea of creating what he describes as an umbrella organization that can host a platform to foster dialogue around mental health.

“The mission statement is to present to communities the opportunity to explore the cultural fabric that surrounds mental health. That’s the big, wide brushstroke and way too big to confront, but if we as a community start to look at our attitudes about things, I think we’re more likely to find a way to affect changes,” he said.

Morris is no stranger to examining his own attitude toward trauma. About 30 years ago, his wife and son Tucker were involved in a fatal car crash.

“Tucker was dead, and then three days later I terminated life support for my wife,” he said, tears stinging his eyes. “I read a book, and the lady that wrote the book gave a statistic that said the survivors of spousal-related deaths tended to die from stress-related diseases within three to five years. I was only 40 years old at the time when Jeremy’s mom and brother died, and there I was, the sole provider. And even though I was pretty sure the statistics related with that were age weighted … It was pretty clear that wouldn’t be a good idea.”

He focused his energies on acknowledging his anger and depression, then releasing them.

“I realized the things that were the most uncomfortable in that experience were really the things that led me out of that experience as long as I confronted them,” he said. “It seemed as though a lot of people that I’ve talked to over the years were pretty convinced that once something terrible happened to you, you were pretty much going to have to deal with the discomfort forever. I didn’t find that to be true in my experience, and that’s the presentation that I made.”

We Are Designed to Heal’s first panel discussion was, in every aspect, a success in Morris’s mind. More than 50 people attended the presentation, which included four other speakers.

Sheri Gaynor, a licensed clinical social worker, arts therapist and one of the presenters on the panel, agreed.

“There were very few chairs left, and we had people sort of sitting on the edges,” she said. “It was wonderful.”

Perhaps the most wonderful for her personally, though, was reconnecting with a former student she hadn’t seen in years, local artist Vanessa Porras.

“I am so in love with her, and I’m going to start doing work with Voices and Valley Settlement with her, like collaborating with her,” Gaynor said.

For Morris, too, Porras’s participation was crucial — as was seventh-grader (and client of Gaynor’s) Ivana Morales discussing her own healing through art.

Now, he’s focused on “reconnecting,” as he called it.

“One of the ladies at the end of the presentation asked a key question: What do we do?” he said.

Gaynor and Morris both agree on that front: make accessible modalities more available, especially to children.

“If we’re really going to look at the fabric and how this all evolves, I think we have to stay really, really closely connected to what is being offered to our children,” Morris said. “It goes back to the art … By definition, if kids are really able to articulate and identify their feelings, and they know what makes it feel comfortable, they’ll know when it doesn’t feel comfortable.”

Morris plans to host four panels a year, from Glenwood Springs to Aspen. Get in touch about the upcoming schedule, email aguidefortransformation@gmail.com