An intriguing integration of Bauhaus forms 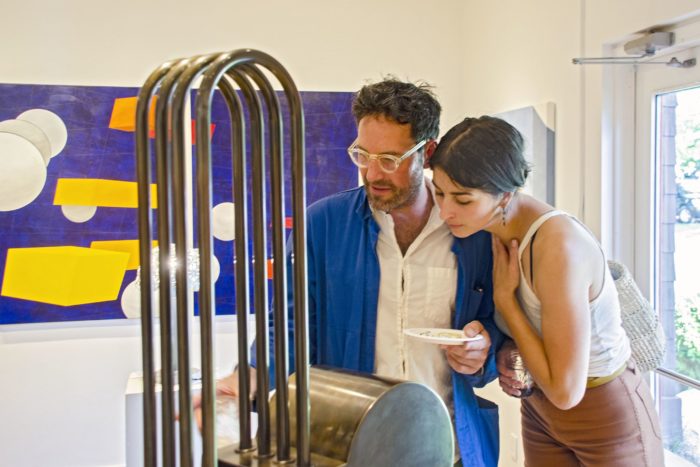 “Bauhaus Seen” is a cohesive, inspiring look at the influences of modernism and the Bauhaus movement. Running from now until July 5, the  exhibit is at the R2 Gallery in the Launchpad (76 S. Fourth St.). The exhibit perfectly captures the essence of the Bauhaus movement.

The Bauhaus movement originated in the early 1900s in Germany and was on the forefront of modernism. The art movement emphasized craft and the principles of design. In celebration of the 100th anniversary of the Bauhaus school, artists around the world have been exhibiting their works influenced by the modernist movement.

Likewise, the Bauhaus exhibit curated by Brad Reed Nelson gathers furniture that exhibits clean lines and strong craft. “Ode to Joseph Albers” is a piece with a series of nesting tables. By carefully examining each piece, one can see that it was crafted from white oak, glass and paint. The piece is clean cut, bright, and unabashedly hand crafted. As a whole, the furniture has simple lines with strong materials.

In contrast, artist Jason Schneider created a bench from corrugated cardboard. It is astonishing that he makes the cardboard appear as if it were created from fabric and foam. The title, “Mies Van Der Rohe” is fitting as it perfectly exemplifies the architect’s style. Overall, the furniture is truly emblematic of the Bauhaus movement.

The paintings, with about half by Dave Durrance, offer a pleasant cohesion to the entire exhibit. The paintings utilize simple design motifs with primarily simple geometry such as squares and circles. Durrance utilizes the basic geometry of a sphere to explore the juxtaposition of the sphere and its surroundings. In the painting, “Slice” the artist appears to have sliced the earth in half and spilled out all of its secrets, almost as if there are many moons hidden. The bold colors, but simple geometry compliments the Bauhaus furniture splendidly.

“Durrance grew up in Aspen in the 1950s and ‘60s, and couldn’t help be influenced by the work of Bayer and the work of other Bauhaus artists,” according to a Carbondale Arts press release.

Wendy Maruyama’s painting “Untitled” is another example of the beautiful simplicity of the Bauhaus movement and its influence. The work is another geometric composition, created with polychrome wood. The colored wood creates a stunning contrast of the composition elements. Additionally, the texture of the wood lends another surprising element that adds to the paintings’ depth.

Finally, the exhibit is rounded out by the stunning paintings of Richard Carter. The substantial paintings each feature a large circle. However, each painting is unique and explores the circle in a different way. For instance, the three paintings, “Lynn’s Pool Cool,” “Y Ultimo Radial” and “Unbleached Hopper” all feature a large diameter circle. What is phenomenal is that despite using a similar color scheme, each painting is unique and has its own exploration of color and design. “Y Ultimo Radial” is a mixed media piece that appears to use painted duct tape or a plastic integrated into the painting. While the paintings are interesting when viewed afar, the intricacies of the detail makes them even more intriguing.

The whole show has close ties to the Bauhaus movement.

“The exhibition also brings together two Roaring Fork Valley artists who have been directly influenced by Herbert Bayer of the Bauhaus movement: Richard Carter and Dave Durrance. Carter worked with Bayer from 1972-1978 producing prints, architectural designs, sculptures, and especially paintings…While Carter’s art is unmistakably his own, it carries forward the legacy of Bayer and the Bauhaus,” states a Carbondale Arts press release.

The release continues, “This year, the Bauhaus school celebrates its 100th year. When renowned Aspenites Walter and Elizabeth Paepcke invited the famed Bauhaus designer Herbert Bayer to Aspen in the 1940s, they planted the seeds of the mountain modernism that now flourishes in both the Roaring Fork area and throughout the West.”

The modernism born out of the Bauhaus movement is alive and well in the “Bauhaus Seen” exhibit. The collection features historic pieces as well as more modern takes on the style. This is not an exhibit you will want to miss! “Bauhaus Seen” will run through July 5th at the R2 Gallery  at 76 South 4th Street in Carbondale.

Teka Israel admires art in her free time when she is not busy creating.