Local hams have a field day 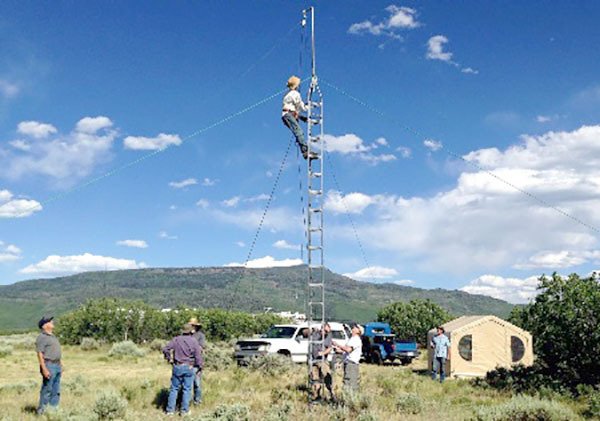 Despite the development of the Internet, satellites and the like, amateur radio is not only surviving, it’s thriving.

The local Ski Country Amateur Radio Club boasts more than 100 members and consistently sees at least a dozen of them at 8 a.m. meetings every Tuesday at the Village Inn in Glenwood and strong participation in Sunday evening check-ins over the air. While the demographics admittedly lean a bit more toward experience, their ranks include men and women of all ages.

“It’s a hobby for everybody,” younger member Brent Williams asserted.

In fact, it’s much easier to get involved now than it used to be.

When Gerry Hittenger got involved with his college radio club, you had to know Morse code and travel to a major city to take an FCC test to get your license. As an electrical engineering student, it took a while before he had the time to do so. By the time he took a ski trip with his future wife, Trish, however, he was using a mobile rig and she so was impressed with how useful it was she went off and got certified.

“I think ham radio operators used to be viewed as kind of geeky, and they’re more respected now,” she said.

It helps that the equipment cost is also much lower than it used to be, with entry-level devices available for under $100.

Incidentally, nobody — at least in the club — knows for sure what “ham” has to do with anything. Conventional lore involves “ham-fisted” amateur operators during the old code days. “

It’s sort of a derogatory term, but we embraced it,” explained Meeting Program Coordinator Eric Grumling.

Indeed, amateur operators have proven essential in providing communication when other systems go down (the area has seen several such outages in recent years — or are needed for something else.)

“A backhoe can take out a cell tower for hours,” Grumling noted. “Usually we can still communicate.”

One of the major roles of amateur radio clubs around the country is emergency communication during natural disasters. And while the locals still help pass messages during hurricanes and the like, the relatively tame weather in Colorado leaves them time for other projects like helping out with special events.

It’s not all serious business, either. Club members keep in touch when they’re out of cell range or send a Mother’s Day wish cross country just for fun. In their down time, they tune into signals from the South Pole, islands in the Pacific or bounced off the moon. Every so often, there’s a “fox hunt” in which participating hams come together to try to triangulate and track down a hidden transmitter.

One of the biggest events of the year is the American Radio Relay League Field Day, which starts at noon on Saturday, June 22, with operators taking shifts through noon the next day.

While most folks view it as “more of an exhibition than a competition” according to Grumling, the local crew still typically ends up in the top 20 or 25 clubs in the country. They get extra points for alternative power (not to mention press coverage) and gain some benefits from elevation and being in the middle of the country to offset the relatively low population and interference of the mountains.

The public is welcome, and during daylight hours, a “Get on the air” station will allow interested onlookers to try their hand at the hobby. To get there, take Upper Cattle Creek Rd. into Missouri Heights out of El Jebel and follow the signs.

For more info on the event and club, visit k0rv.org.