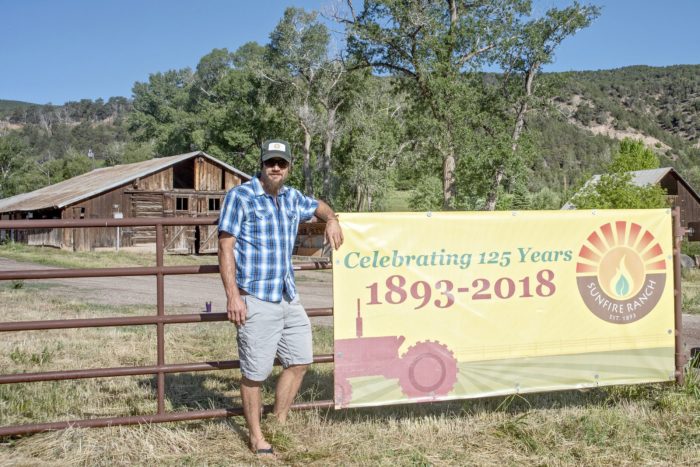 In 1893, then-President Grover Cleveland signed the homestead patent for what Crystal Valley residents now know as Sunfire Ranch. It hangs, framed, in the Sewell family’s house on the property.

Today, 126 years later, Jason Sewell finds himself faced with a sort of pioneering opportunity — but he’s not doing it alone. Connor Coleman, founder of Resiliency Lands, has been a close consultant for years and Casey Piscura of Wild Mountain Seeds has been diligently managing the soil. They’ve been getting ready — for what, exactly, is an evolving vision. But there’s no rush.

“We’re always trying to figure out what the foundation is so the ranch can continue its next iteration. That’s how I see my work here: just building the foundation so my kids can take it or not,” Sewell said.

“The landscape was significantly different when the pioneers showed up,” he said. “They really had work ahead of them to break it out into agricultural land that supported the mining up in Aspen. Then World War I and World War II, my grandfather was raising sheep for wool production and potatoes for the war effort.”

In the 1970s, Sewell’s father Bob subdivided the property into 29 lots for agricultural leasing but discontinued the farming family tradition.

“It was barely grazed and hayed every year, and it was kind of just maintenance,” he said. “So everything fell into disrepair.”

Sewell left the area and earned a degree in business management from Fort Lewis College in Durango, where he met his wife Jayme. He didn’t have plans to return home until his mother, who was a parapalegic, fell ill.

“Looking back, if I’d left, I don’t know if I would have come back. Divine intervention kind of kept me around, and I started investing myself and fixing some buildings because everything was just falling down. It had been without maintenance for 60 years,” he said. “I think just working around the ranch, taking care of my mom and really being outside, over time I fell in love with what it was: with the work, with the concept.”

That concept — Sunfire Ranch as a fully operational entity heavily involved in the community — couldn’t come into fruition, however, if those 29 parcels were otherwise developed. So in 2015, Sewell and Pitkin County started negotiations over a conservation easement that would protect the land. This summer, the Board of County Commissioners and Board of Open Space and Trails both approved the master plan and that easement.

“Typically, ranches have a fully functioning operation. [In] a lot of those operations, the process is a lot easier,” Coleman, who through his consulting business has overseen more than 400 conservation easements, said. “But we need to think about everything we could ever want to do. Once it closes and ink dries and we get our check from the county, we’ll be able to start to implement.”

And the scope for their vision is both wide and long. It has to be, they maintain, to ensure the future of the ranch regardless of any changes in the market or climate.

“The buzzword has been, for the last 10 years, sustainability,” Sewell said. “What that actually means in land ownership and land management is economic sustainability.”

To that end, Sewell and Coleman have been working diligently to ensure economic diversity in their business model for the ranch. Their conversations bounce fluidly from tourism operations to the food industry to education.

“I think the Sewells are great in that they are embracing, not necessarily fighting, the change and what’s going on in the community,” Coleman said. “Here’s the history of it, here’s a place to come and learn about not just what this was but also how a piece of property like this can help a community moving forward. Our goal here is to create a lot of good, quality food.”

“And experience,” Sewell chimed in. “And education and research and on and on. That’s been a drive for me, is how can you contribute to agriculture and then the community? And try to figure out how to make the ranch survive with that.”

They’ve even established Sunfire Outfitters — but any hunting will still be rooted in education, Coleman emphasized.

“We’re technically a licensed outfitter with the state of Colorado,” he said. “We want to use that platform for education as well, so not to be a trophy hunting entity, but … that the hunters that utilize the outfitting service learn [how the land works] and then we can also help cultivate the next generation of hunters that maybe don’t have an opportunity otherwise.”

If operating an outfitter and a wedding venue and a ranch all on the same property sounds overwhelming, it’s because it is, Sewell laughed.

“It’s a big thing,” he said, and they’re just getting started. With the easement approved, he feels incredible pressure to make sure the first steps are done as right as possible.

“We don’t want to make big mistakes here,” he said. “We want to take it slow. What is the impact going to be when we begin tourism operation? How does that fit with everything else going on here? There’s a lot of things we have to consider stepping over the line, post-easement.”

“I probably spend hours a week just constantly keeping an eye on what other operations around the country and even beyond are doing,” Coleman said. “A summer or two ago, we spent some time just touring … getting input on what works and more importantly what doesn’t work.”

Their hope is that in the future, Sunfire Ranch can be a source of education and inspiration for other outfits, as well. It’s all about paying it forward.

“It’s figuring out which animals are best for this topography, climate, all those types of things,” Sewell said. “Hopefully, some of the lessons we learn along the way we can give to the agricultural community so that some of these other ranches and family-owned operations can learn and grow and … not have to make the same mistakes we will.”

But first, there’s still much to do, both on the land itself and in paperwork with Pitkin County.

“We have to get our special review applications, because there’s multiple levels of that, getting our special event venue designation, getting education classes approved, and traffic studies and all the things that go along with getting those approvals,” he said. “We’re hoping to be in a place this time next year to really start implementing some of these things.”

As for what that will actually look like, Sewell isn’t sure just yet — nobody knows the future for certain, but he’s hedging his bets, especially in an era of climate change.

“Two years ago, we planted 56 fruit trees out here, and we actually planted some fruit trees that are out of our zone, that are one zone south,” he said. “It was like, ‘Why don’t we plant 15 peach trees and see what happens?’ Because by the time they start bearing fruit, we could be in a different zone.”

That’s part of the reason the easement negotiations were particularly nuanced, Coleman said.

“Making sure that the rights we reserve are considering [climate change],” he noted. “A hundred years from now, is a vineyard going to be viable here? Could be.”