A finale and a crescendo — local music scene changes overnight 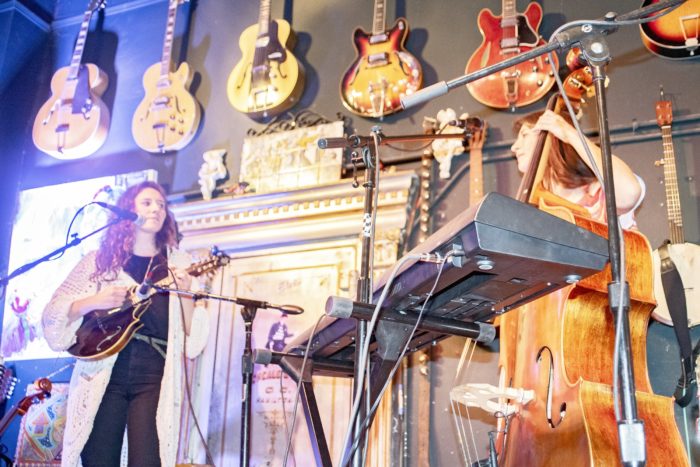 The times they are a changin’ in Carbondale’s local music scene.

People spilled out onto the sidewalk outside Steve’s Guitars on June 21, which marked Pearl & Wood’s last performance — in Colorado, anyway.

“Ellie and I, we’re scheming up a tour in California in November, so it’s not the ‘end, the end,’” said Natalie Spears of her bandmate Ellie Barber.

Barber was actively packing her bags during a phone interview with The Sopris Sun, as she’s departing for San Francisco July 7.

“I am the cause,” she laughed, acknowledging it’s difficult to keep the band together when half of the band moves out of state.

But it was time, she continued.

“I’m from the West Coast, so I’ve still got some family over there,” the Seattle native said. “And miss the Pacific Ocean and a bit of the urban taste.”

Additionally, her career trajectory has inspired Barber to pursue a freelance track, both in her music and graphic design — and the Bay Area is a mecca for design freelancers, she noted.

“My job right now has morphed into communicating climate science through infographics and short, animated videos,” she said. “I basically got demand enough at my job to realize that I can start doing it freelance. I’m translating science, hopefully, in an effort to make it more understandable and entertaining.”

One of the perks of a freelance schedule, too, is that it allows time for her to develop her musical pursuits — though she’s not completely certain what shape those will take.

“I’ve always been … curious about the interface of the cello and the electronic realm,” she said. “I’m a secret lover of electronic music. But who knows? I think I am excited to play some solo stuff and also just see what else is out there.”

Spears, on the other hand, has a firmer schedule. She’s already scheduled a summer tour that will start in Virginia and work up toward Vermont with another dual project, Lizzie Plotkin and Natalie Spears.

“Our project is different because we focus more on the traditional roots of Americana. A good ol’ banjo duo is really a staple in [that] tradition,” Spears said. “We both write and play each other’s music, so it’s still an original project.”

Additionally, Spears is recording her first solo album in the fall, once she’s returned from her tour with Plotkin.

“I’m excited about this solo album and get a bunch of friends to hopefully play on it,” she said.

While Carbondale audiences can still look forward to Spears’s performances — whether as Lizzie Plotkin and Natalie Spears or in a solo capacity — the end of Pearl & Wood is a bittersweet one.

“I’m in the nostalgia stage,” Barber said. “I’m just processing everything and how long I’ve been here and how many relationships I’ve built and soaking it all in a little bit.”

One of those relationships is with Steve Staniford. Pearl & Wood was frequently on the lineup at Steve’s Guitars. Although the band’s last hurrah was actually slated for The Way Home to better accommodate the anticipated crowd, an inclement weather forecast moved them back to the more intimate space at Steve’s.

“It was almost like our homebase. And Steve has been such a support for us over the years, so it was almost fitting: ‘Of course we end up here. Why would we end up anywhere else?’” Barber said.

In their reflections, both Barber and Spears recounted their growth together, both as people and as musicians.

“It became a really wonderful vehicle for expression and connection and growth. We couldn’t even set up a sound system when we started!” Spears said. “No one really tells you that when you’re starting a band, you’re really starting a business.”

The band plays on

If a band is a business, then Let Them Roar is positioning for growth. That same Friday night, the foursome released its newest single, “I See My Light,” in a fundraiser at The Launchpad.

“The proceeds of the song go to these five women who are in sanctuary in Colorado,” said Sophia Clark, who sings and plays guitar in Let Them Roar, in a KDNK interview. “We had someone in sanctuary in Carbondale for 10 months at Two Rivers Unitarians, and we’ve developed close relationships with a couple of folks who are in sanctuary in Colorado. Their power and bravery and the way communities come together to demand the community that we want — one where everyone is honored and everyone is welcomed and respected and safe — that’s what was the inspiration for this song.”

Sandra Lopez, the woman who gained national attention during that 10-month sanctuary, spoke after the performance as well, as she has continued her advocacy for immigration rights since returning to her family in Silt.

It’s an ongoing campaign — the band’s ultimate goal is to raise $40,000 — but Clark is optimistic.

“You can donate as little as a dollar or as much as you want, and I think we can reach that goal if everyone participates and shares. Let’s make it happen,” she said, adding that people can donate online at tinyurl.com/ISeeMyLightDonate.

Advocacy and activism are an intrinsic aspect of Let Them Roar’s music. For vocalist Olivia Pevec, “I See My Light” represents the biggest endeavor yet in that vein.

“This campaign has been one of the biggest things I’ve ever undertaken,” she said. “It’s particularly [relevant] now. It feels like a mantra of believing that it’s worth working hard to express what you believe in, share your values and call on people to see themselves as a part of everything that’s happening.”

And yet, in many ways, the band is just getting started.

“This summer, there’s a lot happening for us right now,” Clark said. “We made a decision about a year 1go to really step it up on the business side of things. We bought a van, that was like the best decision ever. We hired a publicist; we’re getting a lot of media right now. We’re getting some professional support from other people in the music industry whose names we’re not going to mention — yet. I don’t know what’s going to happen, but I think we’re going to continue growing. We’re going to release an album in 2020.”