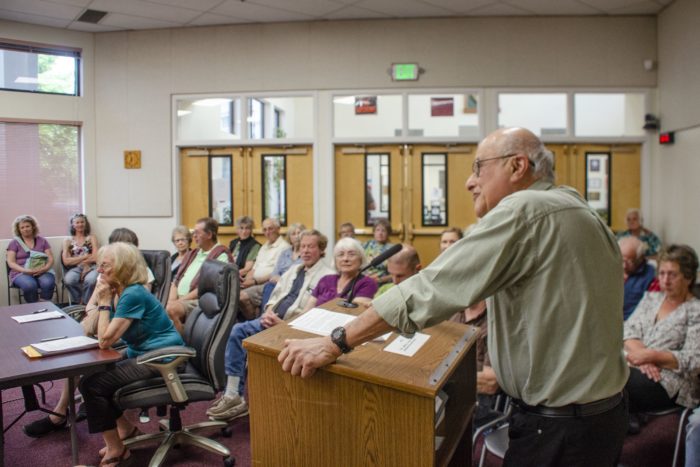 Mayor Dan Richardson worried the final decision to pursue an AARP Age-Friendly Community designation for Carbondale might prove anticlimactic due to sheer lack of opposition, but the cheers and applause from a room full of seniors demonstrated otherwise.

The push was just part of multiple efforts by the Carbondale Age-Friendly Community Initiative (CAFCI) to boost awareness and create practical change.

Perhaps due to its winter launch, the group focused first on mobility and access, tackling snow removal, crossing light timing, benches and more. But the World Health Organization’s checklist of essential age-friendly features covers aspects of outdoor spaces and buildings, transportation, housing, social participation, respect, civic participation, communication and health services. The folks at CAFCI are well aware that that’s a lot to tackle, and, as Ron Kokish told the crowd in his introduction, they’re willing to put in the work to get there.

“Our parents left us with a good work ethic, a plethora of economic resources and a dominant role in the world economy. And they left lots of us — people who turned those advantages than the world had ever seen,” he said. “It turns out we overspent financially, environmentally and maybe morally. We gifted our children… with some problems we didn’t anticipate. Including caring for us, now that we’re getting old. And we’re not through yet. We want age-friendly communities, but those communities will not simply be given to us as our parents gave us our prosperity.”

Not that the Town has been at all resistant, Niki Delson noted in her own presentation. “Everybody in this room is so available to us,” she said. “That’s made a lot of the word that we’re doing a lot easier.”

Still, after serving in her role on the Bike, Pedestrian and Trails commission for over a year, she began to realize that, while the Carbondale to Crested Butte trail may have been appealing in her younger days, it probably wouldn’t be an option for her by the time it got built. Meanwhile, the issues she and her friends were experiencing weren’t really being tackled. With the social security demographic making up a solid 11 percent of the community and the population of seniors expected to double statewide in coming decades, that seemed like an oversight. And they weren’t alone.

“You think in terms of the prism of your own experience, but we talked with mothers who were having difficulty walking with strollers,” she explained.

CAFCI is currently working on improving bus access and pedestrian routes along Eighth Street. The AARP designation is intended to bring it all together, as Judie Blanchard explained.

“Recognition can be used… to attract people to Carbondale,” she said. “They really give us a framework for addressing all types of different issues, so we wouldn’t have to be reinventing the wheel.”

And while Carbondale isn’t quite the kind of community to seek the designation in the past, Blanchard thinks that actually strengthens their application.

“Just about every one of their resources… have been developed for urban experience,” she noted. “They’re thinking we might be able to provide a model for them for small, rural communities.”

The trustees didn’t need much convincing.

“I like the fact they’re not asking for money,” Marty Silverstein began before someone in the crowd cut in with “not yet!”

“They have done the organizing. They have come up with a list of concerns. They’re finding solutions to the problems. They come to us tonight asking to make it official and join this movement,” he continued. “I’m all for it and I can’t see why anyone would be against it.”

Erica Spawhawk praised the productivity of the ad-hoc caucus, while Heather Henry expressed a willingness to rise to the commitments successful membership in the initiative would bring.

Mayor Dan Richardson thought the town was already off to a good start, but said, “I like the idea of polishing that gem and really becoming a stronger age-friendly community.”

The final vote was unanimous with Luis Yllanes absent.