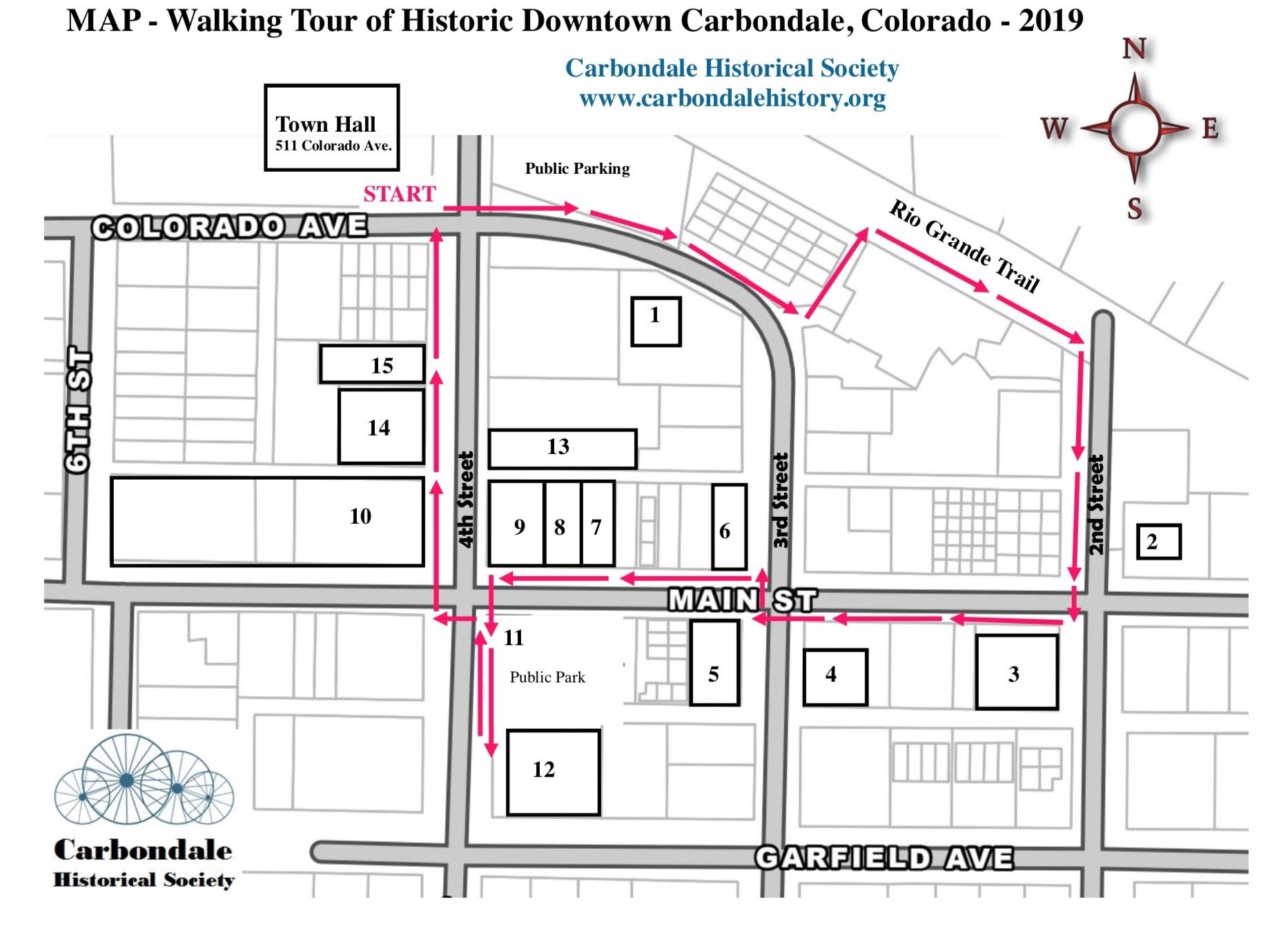 The Carbondale Historical Society has long offered a brochure with information on local landmarks, but until recently it mostly only included information you can already get on the plaques around town. Society President recently revamped the tour with the local “Hiking through Colorado’s Past” meetup group as a test group. A self-guided version is available at carbondalehistory.org and is reproduced here for you edification.

Begin at Town Hall, walk east to curve and look at the yellow American Legion building.

Carbondale was once a major junction of the Crystal and Roaring Fork lines, which hauled potatoes and passengers up the Crystal River Valley, and between Aspen and Glenwood Springs. The building was moved about 100 yards from its original spot, which was closer to the tracks. To the west of the depot where Town Hall is now, sat a train yard and feed lots.

Cut through the parking lot between True Nature on the right and apartment building to take the Rio Grande Trail east to N. Second Street.

The railroads and telegraph lines that came with them brought more people and commerce to the west. The Denver and Rio Grande Railroad ran from 1887 to 1991, and was converted into a Rails to Trails recreational path between 2001 and 2008. The Rio Grande Trail runs 42 miles from Glenwood Springs to Aspen.

Continue to the intersection of N. Second and Main Street and look at the small house on the NE corner.

This building is one of the earliest surviving residences in Carbondale, occupied since 1888. It sits on the site of the ranch where Mrs. Ottowa Tanney ran the State Station, once the only stage stop along the Glenwood-Aspen line that served meals to travelers.

In November 1891, a large fire destroyed the main part of town, which was concentrated on the east end of the current town center.

Ottowa Tanney’s stage stop was one of the few buildings that survived the fire and is still present today.

Cross Main Street to the building on the SW corner.

The two-story structure was the local creamery operated by  Mr. and Mrs. Smoke. The creamery was where local dairy farmers could pasteurize and sell their milk. It continued in business until the 1940s, when it became a private residence.  Later, it was a tire repair shop.

Note the anvil by the main entrance, similar to one used by the first occupants; blacksmithing brothers Roy and Hugh Pattison.

Other businesses in this building included a machine shop, tropical fish store, a nursery school and offices of one of Carbondale’s newspapers, now defunct, The Valley Journal. The building has been occupied by the Village Smithy Restaurant under continuous ownership by one family for more than 44 years.

Cross Third Street to the building on the SW corner.

The Odd Fellows Lodge No. 75, dedicated on July 4, 1888, burned 17 years later to the day, before being rebuilt. The fire began when someone tried to light a carbide lamp in the basement. The main floor was used for dances, traveling shows, and movies and has since housed a craft store, a church and the high school basketball court.

Seven Stars Rebekah Lodge #91, established in 1903, acquired the building in 1995. The Rebekahs are the female component of the Oddfellows, created in the late 1800s as a service organization for the isolated ranching and farming families. They helped whenever there was a need in the community and they still donate much of the proceeds of the Near New Thrift Store to non-profits and schools.

Cross to Third and Main.

This 1890’s era building  with the recessed entry, large display windows and decorative brick corbels is typical of commercial architecture of the day. The iron rosettes on the outside east wall indicate where steel rods were inserted to hold high walls in place and keep them from buckling.

Dad Long’s Store advertised in a 1911 Potato Day program; “The Best…for the least. Dry goods, clothing, groceries and shoes.” The back room was a social center for farmers and cowboys, who sat around the potbellied stove, bought crackers from the barrel and helped themselves to a slice of cheese.

Walk west along the north side of Main.

This decorative brick building once housed the theater where it cost 10 cents to see a movie. Later, it became Kenney’s Pharmacy. It has been a restaurant since 1985.

This bottle-glass storefront was once the headquarters for the Potato Growers Association, formed in 1923. The first carload of potatoes was shipped out of the valley 30 years earlier, and by 1912, the Carbondale area was a leading producer of spuds for the hotel and dining car trade.

PGA member Eugene Grubb, co-owner of Mt. Sopris Farm and developer of the Russet Burbank variety, literally wrote the book on Potatoes. In an excerpt from his 1912 book “The Potato” Grubb wrote,“The Roaring Fork and Crystal River Valley section of Colorado is as nearly perfect in soil conditions as can be found, and the potatoes grown there are not excelled anywhere in the world.”

Another famous Carbondale potato grower was Thomas McClure, for which McClure Pass is named. In the late 1800s, McClure left Ireland for America, and eventually moved to the current site of Catherine Store and purchased a piece of land where he began cultivating that well-known Irish staple: the potato. While growing the then popular variety, the “Peachblow,” he noticed a mutation, and developed the oddity into a new variety that became known as the Red McClure.

In their heyday, Carbondale growers shipped a 1,000 train car loads of potatoes every year across the country. The labor shortages of the 1940’s coupled with falling prices and small, rolling fields not suitable to larger, modern mechanized equipment contributed to the potato’s disappearance from commercial cultivation in the valley.

Look west across Fourth street at the massive brick building.

Carbondale’s most imposing building, built by William Dinkel after his original store was destroyed in the 1891 fire. Dinkel operated the Bank of Carbondale out of his store, and the original bank safe was rescued from the fire and moved to its new location in the northeast corner of the building, where it sits to this day.

The southwest corner housed Dinkel’s Mercantile where “You could buy an automobile, a saddle, a buggy, groceries, shoes, anything that was for sale. If Dinkel didn’t have it, he’d order it for you.” The Mt. View Hotel operated on the second story.

Dinkel built additions to his property in subsequent years, ending with the one-story section on the west end, built in 1913 as a potato brokerage. The freight elevator that was used to transport sacks of potatoes to the cellar for storage, still exists. The Crystal Theatre was opened in 1949 and closed around 1962. It was used as a live theatre for awhile then closed again in the early-1980’s. It reopened on July 19, 1985 with “The Breakfast Club. When film was being phased out in favor of digital technology in 2013, the community came together to help raise the money to convert.

Cross to the SE corner.

Potato Days, Carbondale’s longest running annual celebration, were first celebrated here, beginning in the fall of 1909. Farmers and their families would load up the wagons with their potato harvest and bring them to town for sale to the Potato Brokerage. Then they’d celebrate with a community picnic and contests for the largest beets, potatoes, and babies. The Married Women’s Race featured a pair of silk stockings as first prize. By 1911, there was all-day music, a horse race, and a Grand Ball.

Continue south on Fourth St. to the Launchpad.

Named for the Mercury astronaut. His mother Hattie Cooper had family in Carbondale and resided here until her death in 1991. She is buried in Hillcrest cemetery. Gordo spent summers here as a child, and as an adult he was a member of the Freemason Lodge 82 in Carbondale.

Cross to the corner of the Dinkle Block. Walk to the alley and look at the long brick building across the street.

When trains arrived at the depot, a two-seated buggy would be driven from here to pick up the passengers and carry them the short (often muddy or dusty) distance to Main Street. With the coming of the automotive age, the livery was converted to a mechanic’s shop.

Walk north across the alley to the fenced yard.

Walk north to the next building.

The downstairs was a bar and upstairs was a brothel. The wood floors still bear scrape marks from the motion of the beds.

When Prohibition closed down the saloon in the early 1920s the building became Bagett’s Grocery. In 1927 at age 15, Guido Bagett (GUY-doe Ba-JETT) delivered groceries for his father’s store. He married a gal he met at a Potato Days dance when he was 19, and the marriage lasted 77 years. In 2015 Guido died at the age of 102.