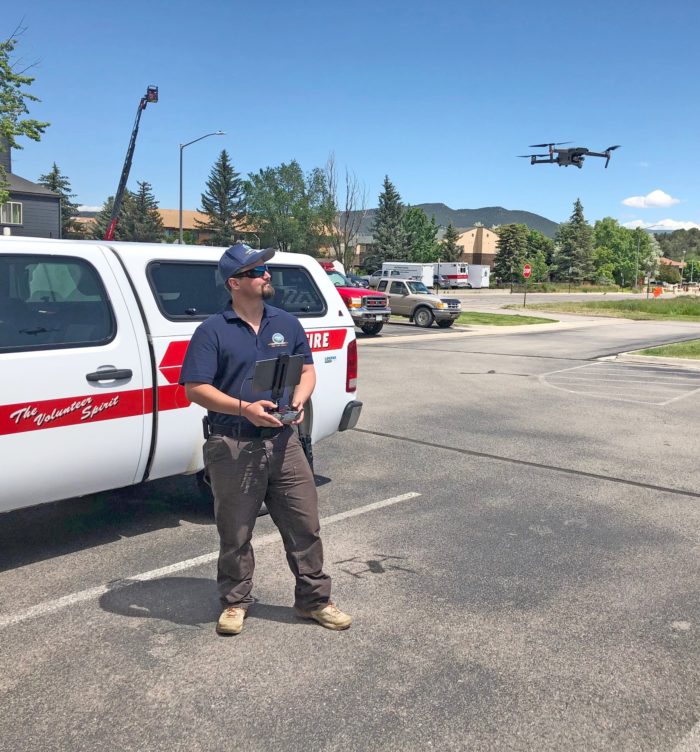 The Carbondale Rural and Fire Protection District has a new team member. It can fly 1,500 feet high up to five miles away, detect heat and relay crystal-clear video, and can communicate with audio.

No, Superman was not looking for a part-time retirement gig after relocating to River Valley Ranch. For $4,000, the District acquired a fully loaded Mavic 2 Enterprise Dual drone. The device will be used to assist in firefighting and search and rescue operations, offering a unique set of features that make it an impressive asset in protecting lives and property during times of crisis.

Aaron Luttrell, a Paramedic Firefighter for Carbondale, was elected to head up the drone program. He earned a Part 107 FAA Remote Pilot Certificate to allow him to fly the drone for professional purposes. After successfully completing a weeklong class and written test, he is versed in FAA lingo so he can communicate with air traffic control, and is apprised of all the safety and legal requirements that go into drone flying.

“It’s incredibly intuitive,” said Luttrell. “They’ve made it so that it takes most of the struggle out of it. You’re assisting it to fly itself.” The Mavic 2 has a collision detection feature to prevent it from colliding with objects and can be tracked with GPS. While it can cover a lot of distance, Luttrell says he will always keep the device in visual sight, never more than 400 feet off the ground.

“A big thing we talk about is situational awareness and the idea of knowing what is going on around you. On any incident we would use this on, that’s one of the biggest things it can bring to the table. It can give us an aerial view and an angle on the incident that we wouldn’t have otherwise, in real time. That will help us keep an eye on where everyone is and what all the moving parts are,” he said.

In addition to relaying video to a tablet in real time (regardless of location or cell connectivity), the drone has an imaging sensor that can capture thermal data. The operators can use it to determine which area of a structure might be on fire, and how hot it is burning or how fast it is spreading. The thermal imaging feature could also be used to detect body heat for swiftwater or general search and rescue operations. Finally, a speaker allows communication from the device to people on the ground. A lost hiker could be told to follow the drone, or trapped individuals could be given instructions to seek safety.

While the drone has many potential applications to assist in the operations of the District, Chief Rob Goodwin emphasized that it will always be viewed as one tool of many, and that the discretion to use it will reside with the incident commander on a case-by-case basis. “The decision to use it on any one incident will come from the incident commander … We’ll never have a pilot just decide to show up and start flying.”

And expectations will be limited, especially during the rollout this summer. “It can’t do everything,” said Goodwin. “It’s great and I love it, but it’s good to understand what it is and what it isn’t.”

He hopes the drone can help reduce or eliminate what he terms “the fog of firefighting” by providing verifiable information that can be “ground truthed” and turned into useable intelligence for firefighters.

“It’s another piece of technology that helps us at times take a leap forward with our capability to help save someone’s life or property. Why wouldn’t we take that step into that technology?”

So far, only Luttrell and a handful of others on staff are certified to use the drone, though there are plans to add more pilots to the roster. Ideally, one person will fly it while another carefully but quickly analyzes the data and relays that to the incident commander. Doing that smoothly and successfully will likely take field experience and will evolve by trial and error as the program develops.

“With imagination and training there’s a lot you can do with it,” said Luttrell.