I’m glad I knew you when I was young 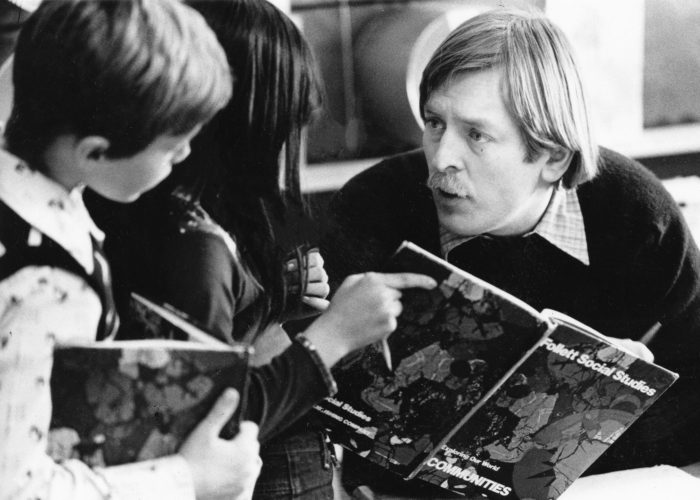 If you aren’t surrounded by people who knew you as a child, I’m not sure I can quite explain why it’s a big deal that Jerry Pluger is moving away. Of course, I’m going to try anyway.

I missed the opportunity to write the story on his retirement from teaching — though of course John Stroud did a beautiful job (tinyurl.com/plugerretirement). And even in 2011 he had defected to Glenwood, giving him a slim chance of occasional anonymity as he circumambulated town with his dog in recent years.

But when the Third Street Center was christened, he stood in the room where he’d taught third and fourth grade for years — now SoL Theatre — and told the story of that time I kicked off my boot and broke a window in class.

That sounds embarrassing, and at the time of the incident I was mortified. But when I’d worked off the damage helping Cathleen McCourt clean the art room (hardly a rough punishment), it became a piece of lore, complete with a Shakespearian punchline. I’ll save it for him to tell, if he’s so inclined and anyone wants to hear it, during his going away party from 4 to 7 p.m. July 5 in the Round Room. I’m sure he has similar stories about hundreds of other kids who are now adults — and therein lies the point.

For those of us who are still around, Mr. Pluger is a reminder that we were once children who did silly things. It keeps us humble, and forces us to confront our childhood selves and consider whether they’d be happy with the choices we’re making now.

Luckily, I’ll still have Judy Milne telling folks about how I wrote without vowels in preschool, Chip Wells reminding everyone how serious I was and Marilyn Murphy trying not to call me Willy at the board meetings.

This is my last chance, however, to turn the tables on Pluger before he moves off to the Pacific Northwest where no one but his children know him.

Mr. Pluger’s classroom was a place of goofy wonder. The most obvious feature was an old clawfoot bathtub filled with pillows and tucked in one corner. It was always a privilege to occupy the tub during reading time or breaks for DTS — drinkies, twinkies and stinkies.

Bringing together an otherwise eclectic decor was Disney in general and Mickey Mouse in particular, with the memorabilia of countless trips to Disneyland mixing with gifts on the same theme. Still, he was willing to give in to the times when Harry Potter fever hit. He read us the first book — the U.K. version, in fact — and arranged a house tournament competition within the class. And when a screening of “Star Wars” inspired me to write a play called “Cat Wars,” he made time for us to perform it.

He also had traditions for all occasions, from Groundhog Day races to birthday donut fishing. And when I happened to get sick on a personal holiday of my own, I got a card from him wishing me a happy one.

The unity that all this — plus two consecutive years in the same classroom — brought us made us dominant on the kickball field and created resentments from other classes that still simmer to this day. It probably doesn’t help that I pointed out that our senior Head Boy and Girl were both former Plugerites.

Amid all this fun, we also learned something. Math class included very basic calculus, and when we consistently forgot what 9 x 6 was, it became “famous 54.” History, spelling — the host of subjects a single elementary school teacher is expected to teach became fun instead of daunting. Far from causing us not to take things seriously, I truly believe he set us up for success.