Property valuations are in — and taxes are up 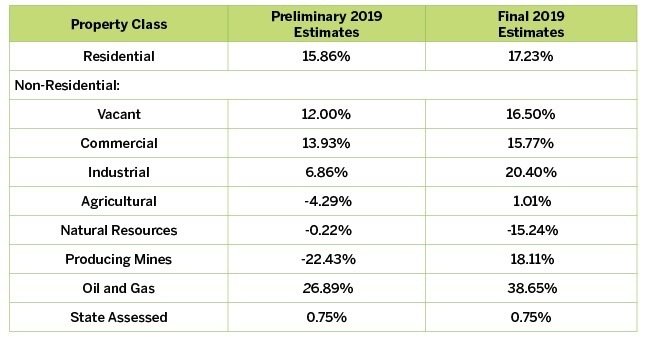 Garfield County Assessor Jim Yellico has been busy compiling a report for a July 15 presentation to the county commissioners. Now that his office has met the end-of-June deadline to respond to property valuation appeals, it’s time to share the data with his fellow elected officials.

To be fair, there weren’t that many appeals.

“Of the 28,000 properties, we had 774 appeals,” Yellico clarified. “The way I view my election is to represent property owners and also governments, so it’s the nexus between the two. Every appeal period is my opportunity to see where we are: Did we get it right? Did our appraisal team do a good job with their values?”

With a less-than 3-percent appeal rate, the answer is pretty clear.

“They really did a great job,” he said.

New property value notices went out May 1, and property owners had the month of May to appeal any decision. The new values will inform property taxes for the next two years. While those values are higher than in previous years, they shouldn’t surprise many people.

“When you look at what our values have done this year, from Parachute to Carbondale … [there’s] nothing really spur-of-the-moment. It’s been pretty consistent and gradual to get to where they are, so I think the market’s really solid,” he said.

A former real estate agent, Yellico added that while there may be a correction, he personally doesn’t foresee anything as dramatic as the Great Recession in 2008, though he certainly remembers well those impacts.

“When I was running for election … the recession had hit, and people’s values had tanked. But they were getting their notice of valuation or looking at their tax bill, and it was a year or two behind.”

By “a year or two behind,” Yellico’s referring to the valuation cycle.

“My office is always looking backward,” he said. “The 2019 reevaluation that we just did is actually the value of your property on June 30 of 2018, so we’re already a year behind as of right now.”

To determine a new value, the assessor looks at sales of similar properties in similar counties. That does not necessarily mean immediately neighboring counties, Yellico noted.

“Pitkin County is a totally different animal than Garfield County,” he said. “We pay attention to Eagle County, Montrose, even parts of Mesa when we’re trying to do comparisons for what Garfield County’s like; we don’t really mess with Pitkin.”

For property owners or those in the market for a home, there’s another region worth following, he continued.

“You can kind of track the Front Range markets a little bit — when they start to see a downturn, we’re usually six months to a year behind. When I was doing real estate, that’s how we would pretty much gauge it: six months to a year, we’re going to see what they saw.”

All in all, Garfield County property owners’ net worth increased.

“Whatever property they own, those values have gone up,” Yellico said. “In Carbondale, the residential values went up between 10 and 15 percent. That’s still a pretty big deal, when your house is worth $500,000, to have it go up between $50,000 and 65,000. The biggest gains we saw in our county were actually Downvalley, in Silt, Rifle, Parachute. They saw like 20-percent increases.”

In that example, someone owning a house valued at $500,000 in a tax area with 75 mill levies would have paid $2,700 in property taxes last year. If that same house is now valued at $565,000, with the new assessment rate of 7.15 percent and the same 75 mill levies, that person would pay almost $3,030 next year — assuming more mill levies weren’t passed, which they were throughout the county.

More money, more problems, as the kids say. Simply put, higher values mean higher taxes. But there are several variables that go into determining property taxes — and they’re not all even obviously in the official equation.

If you’re head’s spinning, don’t worry. It gets more complicated. For instance, the assessment rate dropped to 7.15 percent from 7.2, which is determined by the state, not Yellico’s office. And that’s just for residential properties — all other properties, including commercial and vacant, are at a static 29-percent assessment rate. That has big implications for business owners.

“Commercial in general increased about 5 percent,” he said. “Any other tax increase that happens affects commercial businesses and vacant land owners four times more than the residential owners.”

That’s not to say taxpayers don’t get anything in return for their contributions to society. To Yellico, it’s a matter of communication with the public.

“Carbondale Fire District is like my shining star on the hill of telling local governments how to interact with the property owners,” he said. “They do such an amazing job of saying, ‘We need money to offer you ambulance and fire services, and in order to do that, this is what your mill levy or tax rate needs to be.’ And when they don’t need it, they give it back.”