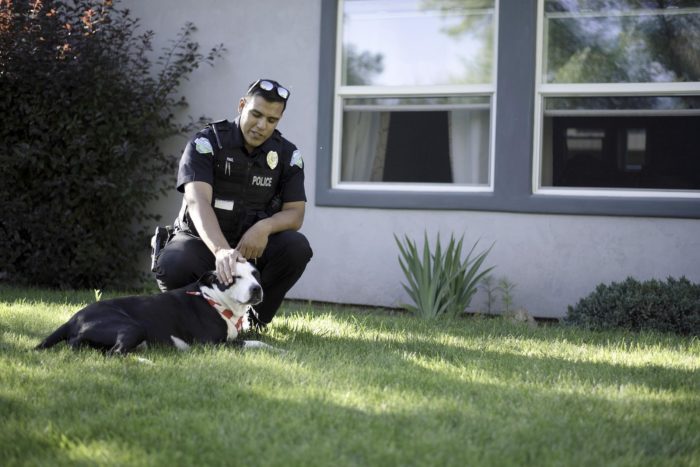 Carbondale Police Officer Paul Lazo considers himself one of the lucky ones. He found affordable housing in the town where he works. The Town-owned employee housing he now lives in is twenty-percent less expensive than his former residence in New Castle. And his new home allows him to keep his dog, Eleanor, who is a pit bull mix he adopted from Colorado Animal Rescue (C.A.R.E.).

Lazo, who graduated from the law enforcement academy in May, works the graveyard shift, from 6 p.m. to 6 a.m. In good weather, he had a thirty-five-minute drive, one way from New Castle. “I had talked to the chief about living closer and how after a 12, 13 or 14-hour day, that driving home would be rough.”

Police Chief Gene Schilling said the availability of affordable housing in Carbondale has been a problem for about 20 years and cited that, “It’s more of an issue in resort communities and a lot of those places do have town housing programs.”

The Town of Carbondale currently has six housing units; occupied by employees from the public works and police departments. Town Planner John Leybourne said, “The Town does look at its housing stock for employees as a great asset.”

With the help of Schilling, Leybourne, and Town Manager Jay Harrington, Lazo was able to secure Town-owned employee housing. He submitted a letter to Harrington as to why he wanted to live in employee housing and the importance of living in Carbondale. As Lazo explained, “Being immersed and being part of the community daily for this kind of work. I think it’s important for me.” He added, “There was a reason I chose Carbondale over any other department. And I don’t know, just thinking long term, it would just be hard to imagine doing that commute the rest of my career.”

There is a benefit for public servants living in the community in which they serve because you know the people; they are your neighbors. Lazo said when he made a decision on what department to join; he factored in “looking at where officers live in a department. Looking at the chief; he’s policed here for how many years, and he’s lived in and is a part of the community. That’s huge to me.”

The Carbondale and Rural Fire Protection District (CRFPD) covers a 300-square-mile area which includes the towns of Carbondale, Redstone, and Marble.

Chief Rob Goodwin explained, “Traditionally, we had volunteers — this was an almost all-volunteer fire department for years. When I joined, we had a paid chief, that was it, and everybody lived around Carbondale or Redstone or wherever and responded.” “We had a fairly sizable group of volunteers. We still have a good group of volunteers, they’re not as sizable. So that has changed over the years.”

The CRFPD has evolved into a combination fire district, with 15 paid responders (3 shifts of 5 responders each) on duty in Carbondale and volunteers who live in the area. Goodwin said that the volunteer base has shrunken over the years. One reason is it is harder to recruit and retain volunteers because of lack affordable housing here. As Goodwin explained, “We’ve lost volunteers who are working crazy hours, maybe second jobs, all that, and they can’t fit this place in their life anymore, even though they love doing it.” He added, “And it’s much harder for people to volunteer with as much as they have to do to try to stay here at times.”

Seven of those 15 paid responders do not live within the fire district. Goodwin said they live in Silt, New Castle, and Rifle because that is where they can afford to buy a house.

Over the years, the Carbondale fire department has lost staff to other area fire departments because other towns were paying higher wages. However, Goodwin said the successful passage of a mill levy increase by the voters in November 2018, has allowed for a wage adjustment for all fire department employees. Those wage increases translate to the CRFPD being more competitively priced within the surrounding market.

Goodwin reflected on the 2018 mill levy passage, and stated, “I really am grateful to the citizens of our fire district, from Marble to Redstone to Carbondale to Missouri Heights, who voted overwhelmingly to help rectify that and they did. And I’m totally grateful for that.”

While fire department wages have increased, that has not solved the problem of the lack of affordable housing in Carbondale.

Garrett Kennedy is a captain/paramedic on CRFPD’s C-Shift. He works three jobs; two of those in addition to his fire department duties. He teaches Emergency Medical Services (EMS) classes at Colorado Mountain College and out of a company in Grand Junction that offers classes statewide. His wife stays home with their two children, ages eight and five, because of the high cost of childcare. They live in Silt, which is a 45-minute commute to Carbondale for Kennedy, depending on the weather and the time of day.

Kennedy started as a volunteer with the department in 2001 and was hired full-time in 2005. He was promoted to captain in March 2018.

His father, Mike, worked as a Carbondale volunteer firefighter for almost 30 years and now sits on the CRFPD board of directors.

Kennedy said when his parents and his family first moved to the area in the late seventies, it was less expensive to live here. He said his dad worked three jobs — as an engineer for the Glenwood Canyon project, sold real estate, and he had a painting business.

As for unpaid volunteers, Kennedy stressed that “In this day and age, everybody has to deal with the fire department on the back burner because they have to work and make ends meet. It’s getting more expensive by the day.”

When asked if Kennedy thought there were solutions, he responded, “I don’t know if there will ever be a solution just because of the cost-of-living. Down in Silt, we have six acres; we have our dream house. And it would be probably at least double the price up there.”

Kennedy said he and his family plan to stay put in Silt. Moving to Carbondale is not an option he is entertaining because, he added, “to be honest, I’m not going to spend my whole paycheck on my mortgage and be struggling.”

Another CRFPD employee commuting from Silt is the office manager and volunteer coordinator, Kat Bernat.

Bernat stated, “It’s like a vicious circle sometimes, and it just keeps going around and around. You make a little more money, but my three-bedroom, three-bath house that I have on two and a half acres in Silt, in Carbondale, would cost $800,000.” She added, “And there I would probably have a $4,000 or $5,000 mortgage. In Silt, I have a $2,000 mortgage, but I pay for it in the commute.”

Kennedy sees another issue looming on the horizon — future retirements of the department’s chief officers. As he sees it, “The problem we’re going to have is as those guys retire we’re not going to be able to have anybody living in District. There are a lot of people around the surrounding areas, as well, that are facing the same issue, and they commute to work just because of the cost of living.”

As for the potential of more Town housing units being available in the future, Leybourne said, “The Town is currently not actively looking at buying other units, but when the opportunity does arise then the Town does look into building the housing stock for employees to utilize.”