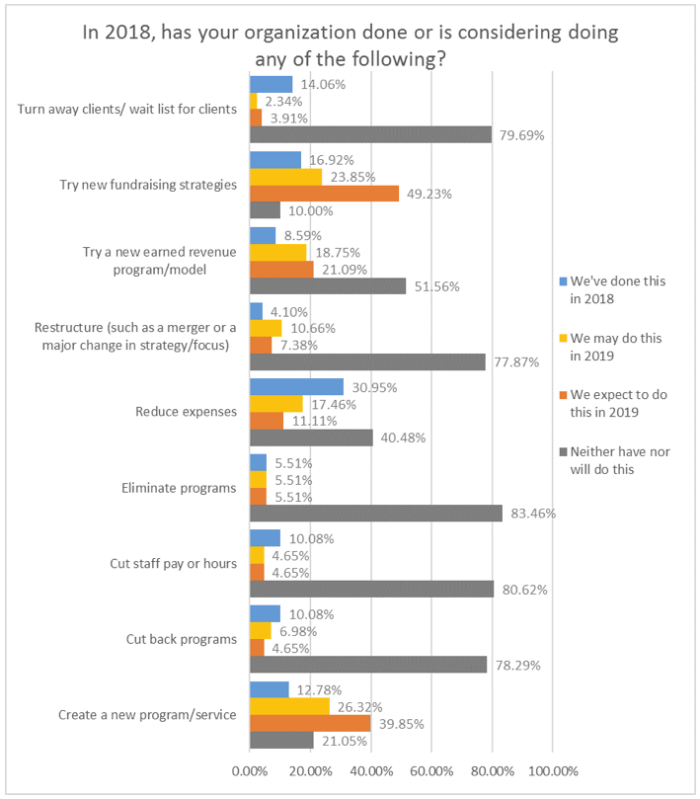 What leads someone to give or not to give are often highly personal reasons.

But when Giving USA released its annual report on philanthropy last month showing a 1.7-percent decline in overall giving, Colorado Nonprofit Association President and CEO Renny Fagan wasn’t entirely surprised. The association had done some data-gathering of its own.

“We do essentially a snapshot survey,” Fagan explained of the approximately 1,300 member nonprofits statewide. “This year, we asked a specific question on revenues with regard to the tax law. Seventy-five percent of our respondents said that the tax law did not impact them — but that leaves 25 percent saying that it did.”

The Tax Cuts and Jobs Act almost doubled the standard deduction, from $6,500 to $12,000 for individuals and from $13,000 to $24,000 for married couples. That means fewer taxpayers are itemizing their deductions, which could have implications for charitable giving, though it’s too soon to tell for sure.

“I would say the trend is kind of mixed in terms of charitable giving and the impact of the tax law,” Fagan said. “The charitable giving world has a lot of factors to it, and the tax law change — at least according to this study — is a factor. I think a second thing, though … is that middle income residents are just giving less and less to charity as a percentage of all incomes. That’s a trend that’s really important for nonprofits to reverse.”

According to the most recent Internal Revenue Service statistics, taxpayers itemized $54 billion less in charitable donations from the previous year so far this tax season, from about 31.8 million deductions in May 2018 to 11.4 million in May 2019.

Of course, that doesn’t mean that people who didn’t itemize didn’t also make charitable contributions, Carbondale Certified Public Accountant Chip Bishop noted, but not being able to itemize is likely a factor in the lower figures.

“I don’t know for a fact that that’s happening, but I could see that would change their attitude about whether they’re going to make one or not,” he said.

In Colorado, however, there’s another option, Fagan offered.

“Coloradans who do not itemize on their federal return can deduct from their state taxable income charitable donations over $500,” he said. “Many more people will not be itemizing, and so that’s a benefit that Coloradans should look for.”

“A donor-advised fund is a fund that an individual can open and they can do it with a $10,000 donation, and that actually becomes a fund of the foundation,” she said. “When the person opens a fund or adds something to the fund, they get a tax deduction at the time.”

Additionally, the person who opens the fund and other listed advisors receive the benefit of the foundation’s resources and guidance when making charity decisions.

“Nonprofits in the Roaring Fork Valley are great for providing a lot of community benefit, and they know their donors best,” Fagan said. “Nonprofits are innovative in so many ways, and they adjust to these dynamic situations.”

That is to say, there are myriad potential reasons for the seeming downturn in individual donations, but it’s not all doom and gloom.

For instance, Windwalkers Executive Director Gabrielle Greeves knows exactly when her organization first saw a downturn in revenue, and it was before the tax reforms went into effect.

“I would just say there’s a donor fatigue. The environment here literally was affected by a fire … that was a big fatigue. That was the downturn for us. We were evacuated,” she said.

Since then, though, Greeves has rallied some of the nonprofit community into something she calls co-pitching — many organizations pitch in to make a larger vision a reality.

“I have 22 partners in this community,” she said. “We as community leaders are taking it into our own hands; we are making an effective choice to make it happen together.”

Thunder River Theatre Company (TRTC) Executive Director Corey Simpson emphasized his excitement about the theatre’s next developmental chapter, as well, despite disappointing fundraising results from a May gala.

“We’re in the process of revising our overall development and fundraising plans,” he said, adding that “major gifts” and Prima Donors — those who contribute $1,000 or more annually — remain steady, and legacy giving is becoming a part of the organization’s plans.

“We’ve had really positive momentum: our ticket sales are up; we’re being nominated for a lot of awards; we’ve doubled our programming in the last two years,” he said. “To us, the community looks excited and engaged, so it doesn’t feel like we have an issue with programming or community perception.”

That said, about 20 percent of gala ticket reservations cancelled within 48 hours of the event, which resulted in a sharp decline in overall fundraising from previous years.

“When I talked with one of our donors recently about it, this person said … ‘The changes in the tax code mean that I didn’t have the same resources to give to the gala this year.’ And that’s something that I hadn’t heard during the gala or going into it, so I’m really curious about, is that really what’s going on?” he posed.

Then again, he continued, it may have just been the bug that was going around that weekend. Regardless of the reason, he remains optimistic.

“The answer for everybody most likely will be, ‘We’re seeking other funding sources to make up the deficit,’” he said.

In that regard, The Carbondale Clay Center (CCC) is celebrating. Executive Director Angela Bruno recently received word that the center was awarded the Laura Jane Musser Rural Arts Initiative Grant, a $10,000 boost to Bruno’s operating budget.

“The point of the grant is they want to see arts organizations that are incorporating rural communities into the arts and how you’re doing that,” she said. “We constantly have this great rotation of volunteers, so I focused on that and our outreach. I can’t believe we got it; I’m so excited!”

Overall, things are looking bright for CCC. In addition to the grant announcement, Bruno’s been busy meeting with architects in anticipation of unveiling a capital campaign for a new building. And every target campaign has been completely successful. But, she admitted with some trepidation, the center isn’t immune to the same dip in individual, smaller donations.

“We are getting major support, more than we have before. What I’m personally seeing is the number of small donations are down, but I’m getting a lot more bigger donations, like $1,000 and over,” she said.