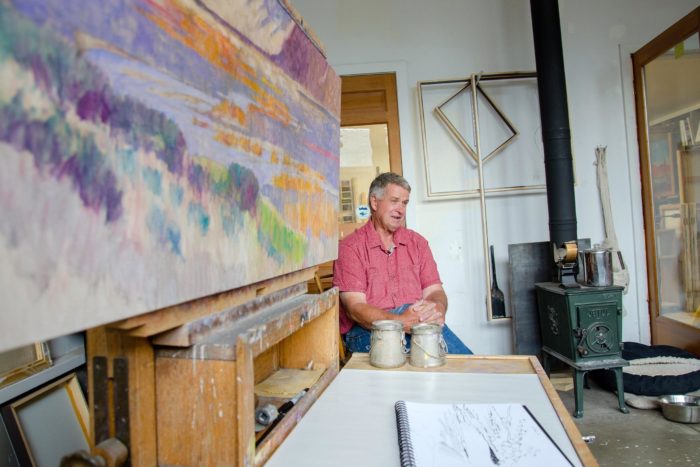 The American West boasts incredibly stunning landscapes, to be sure. Andy Taylor, though, does his best to paint the scenes that often fall in the shadows of the likes of Mt. Sopris.

“I go places sometimes that other people might not go. It doesn’t mean that they’re exotic or remote; they might be awash under an interstate,” he said in a KDNK interview. “A lot of the things I paint would best be described as insignificant scenes —  which is not unique in the art world, but in the West, it might be a little bit because we’re surrounded by all kinds of geological icons.”

Taylor says he’s moved by a moment in his art. Specifically, the moment that caused his pause.

“There are all kinds of little things you pass by every day, or if you just look at it a little bit differently or catch it in the right light or the right season, it’s really stunning,” he said.

His process starts with a moment, and then a drawing. He had several on hand in his backyard studio of various nearby ranch scenes still owned by family names embedded in Carbondale’s history, such as Sewell and Perry. A few already had some color, but most were black and white.

“I drew these for no particular reason,” he smiled.

“I think that’s important,” he said. “You’re going through a period of translation from the literal image of what we think we see. As soon as you draw it, you’ve reduced it; you’ve given it boundaries because of the paper.”

So he lets those images percolate a bit, both on paper and in his mind, before he moves on to the next step: the actual painting.

“My paintings take anywhere from three to six days spread out over about two or three months. That’s another level of translation. You’re getting further and further away from … the literal image — not only timewise, but [with] space. You’re finding out what is important about that drawing or that scene, hopefully. Sometimes, we all miss the point,” he chuckled.

Painting is an exploratory process, he continued, and while some things may be lost in the final translation, sometimes other aspects are found.

“Sometimes it’s technique, how I handle the paint. Sometimes it’s finding combinations of paint that I hadn’t found before and then I’ll never remember again. There’s discovery and more discovery and rediscovery all the time, every aspect of it,” he said. “And that really makes it interesting because it isn’t a static thing. When you start a painting, there are certain steps I sort of go through, but it gets all very confusing pretty quick.”

At the end of the painting, though, if Taylor feels he successfully conveyed some of what originally made him stop for that initial drawing, he’s happy with the result.

“I hope that some of my paintings are able to … give the same sort of stop to somebody else, in a different way,” he reflected.

From studio to gallery

According to Ann Korologos Gallery Marketing Director Claire de L’Arbre, Taylor can rest assured that his current exhibition, “Open to the Unexpected,” accomplishes that goal.

“Just to hear everybody’s reaction — everybody’s coming in to see his exhibition — his colors, they’re so joyful and bright. They just really elicit this love of the place and happiness,” she said. “This work really reflects the passion that he has for our local area and for these hidden gems that he illuminates without giving them away.”

“Open to the Unexpected” opens Thursday, July 11 at the Ann Korologos Gallery, 211 Midland Ave., with an artist reception from 5-7 p.m.

“When I have a show, it’s one of the rare times I get to see [my paintings] out of the racks or leaning up against the wall, so it is nice to see them out,” Taylor said. “That’s where I want them!”

Galleries offer just another context for Taylor, who’s 50 years into his professional career as a painter, to continue his evolution as an artist.

“I have devices where you get some distance in the studio, which gives you an idea, but it’s not the same,” he said. “Sometimes … what looks nice in the studio just gets lost someplace else: either it’s too subtle or what you think is big is not big.”