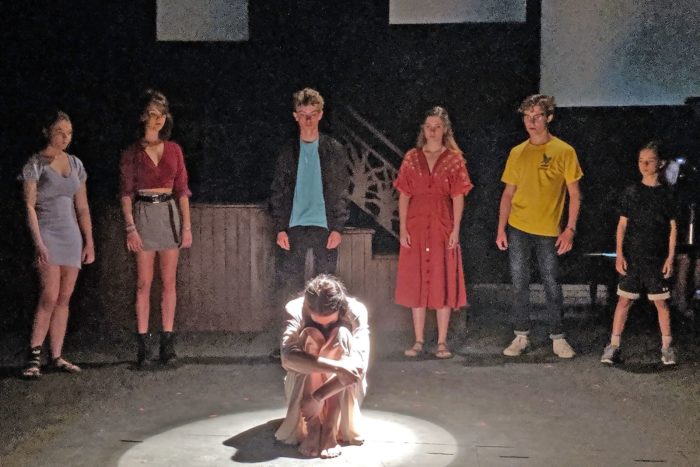 The world premiere of the musical, “Honeybee,” takes place at 7 p.m. on Jul 18, 19, and 20 at Thunder River Theatre. The play is written by Roaring Fork Valley students Jenny Henry and Brooke MacKay and is presented by Stage of Life Theatre Company (SoL). Henry wrote the music, MacKay wrote the script, and together they wrote the music lyrics.

Henry and MacKay are close friends, and this is their first foray into the process of creating a play. When they were younger, they acted in productions for Stage Door Theatre in Glenwood Springs. They both performed in SoL productions; Henry since 2012 and MacKay since 2017.

Henry and MacKay approached Jennifer Johnson, SoL executive director, and Dani Kopf, former SoL director and stage manager, about doing a staged reading. That evolved into a table reading at SoL and within one week, they started working on the script and work shopping the songs.

Henry plays one of the main characters, Cassie, and MacKay is the play’s director. The six-member cast, ages 11 to 18, have acted in other theatre productions in the Roaring Fork Valley. Many of the actors are also friends of Henry and MacKay.

MacKay observed a change in the cast because, “when I was working as a director with the actor that plays a character that commits suicide, working through that character, finding moments for there to be light, but also helping her examine the dark. As her friend outside of rehearsal, I’ve noticed a significant change in the way that she deals with her own emotions.” She added, “I thought the entire cast has a whole new understanding of it.”

Aspen Hope Center (AHC) provides a 24-hour hotline to assist callers experiencing mental health issues. They also provide education to area schools, with their clinicians stationed in many of them.

AHC Executive Director Michelle Muething said when students are asked, “Why do you think that teenage suicide is so prevalent today? And 95% of them will say social media. We live in a different day and age with social media today.”

Another factor, which Muething cited with teenage suicides, is that many teens lack a fundamental understanding of the concepts of life and death. Muething explained, “I heard an interesting presentation not too long ago about our kids really not having a concept of death, the afterlife, spiritual beliefs, and they don’t get what happens, and death isn’t necessarily real. You have all these video games where you come back [to life].”

“Honeybee” sprang from Henry and MacKay wanting to express their perspectives on suicide and attempted suicides. As Johnson said, “This has been them processing some things that our valley has gone through in the last few years. And this has been their response to it.”

MacKay saw the need for a more truthful representation of suicide in the media, because, as she said “I feel like whenever it is represented in the media, it’s very binary. Almost where you have it super villainized or romanticized. And in our experience, and the experience of most people, it’s neither of those things. And we wanted to find a fairly middle ground between the two.”

Henry remains hopeful for the future, as she said, “I’ve noticed for the first time in a long time, people are coming forward and saying, ‘Hey, this is not something that we should keep hush-hush.’ And people of all ages are starting to realize that if there’s a problem, you have to address it. And you have to bring light to it and make sure that people understand it, rather than just keeping it in the dark.”

“Honeybee” contains adult themes, strong language, and sensitive and emotional material, including the discussion of mental illness and suicide. Therefore, it is not recommended for students under the age of 13 without adult supervision. Tickets are $20 and available in advance at soltheatrecompany.org or at the door.